'Tis the Season to be Steamy

Today I'm participating in Nicole Morgan's Hot Winter Nights blog hop. Nicole has challenged her author friends to come up with posts that will warm you up and make you forget all about blizzards and below zero temperatures. Every single one of us is offering a prize. In addition, Nicole is giving away a $50 Amazon gift card and a big bundle of ebooks. 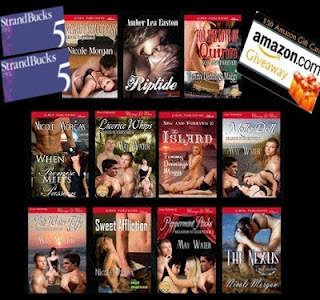 For more details, just visit http://nicolemorganauthor.blogspot.com/  or click on the festive gentleman above!

You'll find links to all the participating authors at the end of this post.

Meanwhile, my offering is a sexy, snowy soak in a hot tub, from my holiday M/M/F ménage Almost Home.

Suzanne and Gino have history going back to high school, but for years Suzanne has been three thousand miles away, preoccupied with her challenging career. A mistletoe kiss at a holiday party reminds her of their old bond and proves that some things get better with age. When Gino rescues her from a New England blizzard, though, she discovers that she's not the only love in his life. Gino shares his bed and his colonial-era farm house with taciturn painter Harris Steele. Snowed in, without electricity or running water, the three explore the many shapes a triangle can assume. Although she's far away from her everyday existence, Suzanne realizes that she's almost home.

After you read the excerpt, be sure to leave a comment. I'll be giving away a copy of this book to one lucky person who comments. Please include your email address – so I can find you if you win! 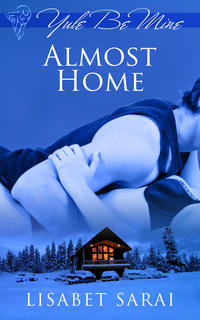 “The house has six bedrooms,” Harris commented. “Way more space than we need.”

“Yeah—even with my office and Harry’s studio, there are two rooms we barely use.”

“We do have broadband Internet, by the way. Even if we don’t have mobile service.”

“There’s a local limo company that can get you to Logan in two hours. Harry uses it when he has an exhibition in New York…”

“This is freak weather,” Harris interrupted. “Most winters we don’t get much snow…”

“I know!” Suzanne couldn’t keep from laughing. “I grew up here, remember?”

“No,” she replied, flush with a recollection of the loyal, clever tease he’d been in school. “I remember very well.” She looked from one to the other, then swallowed hard. She might be misinterpreting, but she had to get things out in the open. “It almost sounds like you’re trying to convince me to move in with you.”

“Would you like to?” asked Gino, a tiny quaver in his voice. “Would you consider it?”

“I—might,” she started slowly, her mind already reeling with ideas for how she could manage her work remotely. “But—are you really sure you want me? After such a short time together?”

“I think twenty two years is more than enough time to know what I want.”

“If Gino wants you, I’m willing to give it a try.” Harris gave her one of those devilish smiles. “It might be fun, Suzy Q.”

Gino circled her shoulders with one strong arm. “I think you’d complete us. Balance us.” His firm lips fastened on hers. His tongue gently urged her mouth open. He drank her in, as though he were savouring a vintage wine. When he kissed her, all her doubts evaporated. This was where she belonged.

“I’ll think about it,” she answered when he finally let her go. “There are a lot of practical issues…” She didn’t want to get his hopes up. She might have second thoughts.

“We’ll solve the problems,” said Harris. “Together.” He grabbed Gino’s hair and wrenched his lover’s head back, then planted a long fierce kiss on Gino’s laughing mouth.

Suzanne gazed at them, fascinated, sensing the passion that circulated between them. She grew more aroused by the instant. It was crazy. Outrageous. It was totally outside the bounds of propriety. But it just might work out.

Don't forget to comment! This counts as an entry for the grand prizes, too!

I read this book and really enjoyed it. Thanks for sharing.
debby236 at gmail dot com

The excerpt was wonderful and the cover is beautiful.
Yvette
yratpatrol@aol.com

Thanks for the compliment. If you win, you can pick something else as your prize.

OOOH I think Almost Home is gonna be yummy! Thanks for the chance to win :)
raynman1979 at yahoo dot com

oh my that excerpt was super sexy!!! Thanks for warming up my afternoon!

Thank you for the excerpt.
bituin76 at hotmail dot com

love that cover! Sounds like a winner
msboatgal at aol.com

Wonderful excerpt...this looks like a great read (sexy and loving relationship)! Thanks for sharing and for the giveaway chance!
ivegotmail8889(at)yahoo(dot)com

Oooh nice excerpt... thanks for sharing such a great tidbit!

Thanks for the excerpt and the chance to win!
natasha_donohoo_8 at hotmail dot com

Great cover! Thanks for the great giveaway hop! I like spending my winter nights curling up on the couch with my favorite read and some hot chocolate!

Great excerpt. Nothing like a little menage action to keep you warm in the winter months!

Thanks so much for the great giveaway and being a part of this amazing hop.

This story definitely has all it takes to warm things up and where I live it's definitely cold now. And snow. A hoot book and a hoot beverage are great warmers.
tessa dot bamberg at kolumbus dot fi

Great excerpt, love the cover too.
Thanks for being part of this fun hop.
skpetal at hotmail dot com

Almost Home sounds great! I loved the excerpt you posted.

I love menage! Yours sounds great!

I would love a sexy snowy soak in a hot tub :)

Thank you for participating in the blog hop!

Almost Home sounds like a great read. I can't wait to read it. Love doing blog hops, meeting new to me authors and adding a lot of books to my list.

Thanks for the giveaway.

The excerpt from Almost Home was interesting. Seems you can go back home again.

Thanks for the opportunity to share, meet new authors and perhaps snag new books to read.

This excerpt really makes me want to read the book -- thank you so much!

Almost Home looks Sizzling - the cover alone with its winter background makes me want to pick it up and your excerpt was awesome.

liked the excerpt thanks for the giveaway! - regnod(at)yahoo(d0t)com

Love the cover of Almost Home and enjoyed the excerpt. I love to curl up by the fire on a cold winter night with the hubby drinking hot chocolate toddies and watching a movie, or reading a HOT romance book if hubby is working. Thanks for being part of the hop and for the chance to win. <^_^>
reneebennett35 (at) yahoo (dot) com

This sounds really good thanks for sharing great excerpt!
Thank you for the great giveaway and fun blog hop!
Latisha D
tishajean@ charter.net

I loved the excerpt. Thanks for the giveaway.
sstrode at scrtc dot com

Loved the excerpt! Thanks for the giveaway and for being part of the blog hop!
flava_sava_chick@yahoo.com

Loved the excerpt and MMF menages :) Thanks so much for the giveaway & for being part of the hop.
June
manning_J2004 at yahoo dot com

Great cover and excerpt, looking forward to reading it all. Thx for the hop stop.

Loved the sexy excerpt & the beautiful cover of Almost Home! Thank you for being part of this hop & the giveaway.

I loved the excerpt. I'd really enjoy reading this book! Thanks for the chance to win.

Awesome excerpt! Sounds like it's a great book! Having fun with this blog hop!

I'll take some Gino and Harry to go. I would definitely pack up and move in.
planterofhope(at)aol(dot)com

Thanks so much for joining in the hop and sharing your thoughts about my little three-way!

I've drawn a winner for my bit of the hop. Congratulations to C BARTON! I'll be sending you your book soon.

Meanwhile, if you want to be kept up to day on all the giveaways from me or my blog guests, please join my Yahoo list:

Thanks again for your support!