Sunday Snog from Quarantine - and a Giveaway!

It's Sunday again, and I'm celebrating my Rainbow Awards honorable mention some intense orality from Quarantine. Furthermore, I'm giving away a print copy of the book. All you have to do is comment!

Don't forget to visit Snog Central over at Victoria's where I suspect she has lots of holiday magic brewing, and links to many more luscious lip locks! 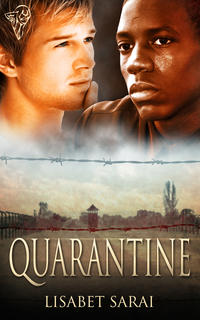 A rickety staircase led to the basement. Here, in a tiled maze of passages, the sex was far more public. One man pinned his partner to the wall, wrists captured overhead, jerking himself off while plundering his companion’s mouth. Another couple, one man deeply tanned, the other pale, writhed on a bench in one of the alcoves, hips pumping in synchrony. Further down, they encountered two burly biker types sharing a slight, bookish-looking man with a dark ponytail. Their victim bent over a stool, with one cock buried in his ass and another in his drooling mouth. Bold tattoos rippled over the bikers’ muscular backs as they pounded into him. The bliss on the younger man’s face made it clear that he was a willing participant in this scene.

Dylan glanced at Rafe, checking his reaction to this raunchiness. The black man’s full lips were parted in a pant. His eyes simmered with lust. His erection distorted the towel, a wet spot growing at the tip. Grinning, Dylan unknotted his own towel and swung it around his neck. His cock arched towards the ceiling, eager for action.

He caught and held Rafe’s eyes. Don’t be afraid, he broadcast to his lover. I’m here. The other man seemed to get the message. Slowly, without breaking the visual connection, he unwrapped his hips and set his massive erection free.

Dylan was suddenly dizzy with need. He sank to his knees, mouth open to receive the glorious hardness waving in front of his face. Rafe, however, pulled him back to his feet.

“Not here,” he said. He half-dragged Dylan through an open doorway into a vast, empty room that smelled faintly of chlorine. The rectangular depression in the centre was an old swimming pool, empty now save for an algae-scummed puddle at the deep end. Rafe settled on the ledge that ran along the wall and spread his legs wide. His dick reared up like a snake, the single eye charming Dylan into a motionless trance.

“Suck me,” Rafe commanded. Dylan didn’t need a second invitation. In two seconds, he was kneeling between those corded thighs.

Ignoring the chill, slimy tile under his knees, he leaned forward and swallowed Rafe to the very root. He buried his nose in Rafe’s wiry pubes. The rich man-musk drowned out the smells of mould and rotting wood. The spongy knob prodded his palate. He drew back, sucking hard and wringing a groan of appreciation from Rafe. “Your mouth is so damn hot,” the black man moaned as Dylan slithered his tongue along the silky shaft, then engulfed it once more. “Oh, God! Yes!”

Usually Rafe took control, fucking Dylan’s mouth with the same ferocity he lavished on his ass. This time, though, he let Dylan do the work of pleasing him. Dylan played with the fat log of flesh, alternating between teasing his lover and devouring him. He pursed his lips over the bulb, tongued the weeping slit, flicked at the sensitive frenulum, until Rafe was begging for more. Then he plunged down, turning on the suction, immersing his lover in wet heat.

Finally, Rafe couldn’t hold back. He seized Dylan’s head, holding him fast. His blunt fingers clutched handfuls of Dylan’s hair as he drove his cock down the other man’s throat. The slight pain made Dylan’s own prick even harder. He relaxed, opening himself to everything Rafe gave him.

He forgot about the camp. He forgot about Hammer. He completely forgot where he was. Rafe was his only reality―hardness and heat filling his mouth, salt and bitterness on his tongue, ripe sweat in his nostrils, smooth ebony skin rippling in front of his half-closed eyes.

Leave a comment and you could win your own copy of the book. Don't forget to include your email!

Oh...can't wait to read this this, would love to win.

Oh thanks so much. I have to read this book.
Debby236 at gmail dot com

I love this book and have it on my Kindle. Would love to win a signed print copy!
Yvette
yratpatroL@aol.com

I gotta say if this got any hotter it would go up in flames all by it's self lol :)

Oh, that is one luscious excerpt!

This book is so hot I may not be able to hold it for long.
Great going.

Thant is one hot excerpt! Congrats on the Rainbow Awards honorable mention!

Wow! What a hot excerpt - I WANT that book now :D

I neeeeed this book. What a teaser.

This book sounds like a very HOT read. Cant wait to read the rest of the story.
lauratroxel@yahoo.com

Wow, that is hot! Can't wait to see what happens in the rest of the book.

Nope, not going to read the excerpt. I am really looking forward to reading this but excerpts drive me crazy because then I try to figure out what happens next and I am always wrong.

I'm the opposite--I've got to be in a sort of mood to read M/M, but every except I read of Quarantine, I want more!

This sounds very good! Thanks for sharing!
shadowluvs2read(at)gmail(dot)com

Is this contest over? did I miss it? oh, I hope not!!! I luv this story. I have read it several times and still get excited and so into it with each reading. I would luv to have a print copy!!!

thanks and happy holidays!

Hello Lisabet,
Congrats on your Rainbow Awards honorable mention, you definitely deserve it for any & all of your Books.
I'm not sure if this Contest is over, I hope not, I'd love to enter your Giveaway for a print copy of your HOT M/M Book, "Quarantine". Your excerpt is just a Teaser in this Smokin' HAWT Book.
If your Contest is still open I'd very much appreciate the opportunity to be considered for this awesome Gift of your Book. Thank You.
Take Care Lisabet & Stay Naughty,
PaParanormalFan (Renee)
paranormalromancefan at yahoo dot com

I'm just about to draw the winner, so good luck! And thanks for dropping by!

Thanks, doglady! Keep your fingers crossed...

Thank you, Debby - you're such a loyal reader!

Hi, Tom - you and your wife would probably enjoy almost any of my books, from what I gather ;^) Good luck!

Actually, Helene, I have to keep my author's copies in a fire proof safe... very inconvenient! ;^) Good luck!

Thanks so much, Sharon! You can always wear oven mitts...!

Well, we'll see in a minute or two, Ilona... Thanks for coming by!

Yes, Patti, I've been accused before of being a tease... Good luck in the drawing!

Thanks for dropping by, Laura. I think you're new to Beyond Romance, aren't you? Good luck!

Thank you, She. Good luck in the drawing...

Okay...I can't tempt you at all, Jen? You REALLY were strong enough not to read it? ;^)

And thank you, Shadow, for dropping by!

No, Jo - you didn't miss the drawing. Good luck, and thanks for your enthusiastic support.

Haven't heard from you in a while. I hope you're staying naughty too...

Well, ladies and gentleman - I've drawn the winner, and it's Patti P. Congratulations! And thanks to you all for participating. I'll be announcing a new contest later today, actually, over at Sage Marlowe's blog...

Calling PATTI - You didn't leave me an email address! Please contact me by email and send me your snail mail addy, so I can mail you the book!

(If I don't hear from you by Friday, I will draw another winner.)

I would love to win and there's no rule that says I can't enter today. See! Persistence! *g*
I just read your e-mail about Sage Marlowe's blog and I clicked the link for BR. Sooooooo, if Patti doesn't show up.....
Congrats again, Lisabet!

It's so nice to have you reply to my comment. Unfortunately, yes it has been awhile & I haven't been able to be online as often.
We had a pretty bad time here in the Northeast with Hurricane Sandy; no electric for 2 weeks, no cell phones for 3 weeks, off & on internet and we still haven't fixed all the damage.
But we are starting to get back to normal & I'm glad I can visit my Favorite Authors Blogs again! :)
Take Care & Have a Naughty XxxxMas ;)
Renee'