What's in a Name?


Once upon a time I had an idea for a romantic adventure story. I had a ripped-from-the-headlines plot and the ideal hero, a former CIA spook that walked away from the spy biz to live in Key Largo, Florida. He would be cool, tough and sexy, (something most of us aren’t), and would get involved in cool, tough, sexy adventures (something most of us can’t do). There was only one little problem – what should I call him? I had his first name picked out but needed a surname that was unique and wouldn’t conjure up a preconceived image. That eliminated names like Callahan, Savalas, Columbo, Rambo and Bond. I christened him Nick Seven and his first couple of adventures became best sellers and critical hits.

Then I conceived another series featuring a leading man who was light years removed from this character. I named him Vic Fallon and he’s a former police detective in northern Ohio who was discharged for using unnecessary force. He’s now a private investigator, but with a twist. He doesn’t really have to work and only takes jobs when he’s bored or something intrigues him. He’s also the only recurring character, leaving him free to romance a different woman in each story.

Now comes the hard part. How do I keep these two characters straight when I’m writing about them? There are some similarities but I want each to have their own personality. I recalled that when Mickey Spillane wrote about someone other than Mike Hammer, the names might have been different but they were basically the same person. I didn’t want to stumble over that rabbit hole.

Nick Seven is a rather dark character, due to some past experiences when he worked around the globe as a spy. He’s damaged goods and that usually comes into play in each adventure. He lives with a Barbadian beauty named Felicia, who is a former co-worker. All they want to do is live anonymously in The Keys but their former employer has different ideas and each story has a topical theme. Here’s an example from my newest release, Never Look Back: 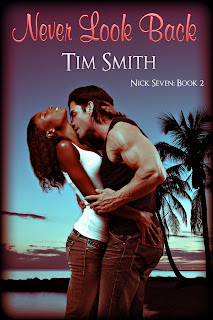 The last bit of moonlight over Key Largo slowly faded with the arrival of daybreak. The emerging sun was quickly overshadowed by dark clouds rolling in, accompanied by thunder that rumbled over the Gulf of Mexico. Soon the inevitable rain began, pelting the ground with an instant cloudburst, washing away the grime and guilt of the previous night.

Nick Seven watched from the kitchen of his condo that overlooked the Atlantic. He leisurely puffed a cigarette between sips of coffee while his mind wandered, dredging up things from the long ago past.

Pre-dawn has to be the loneliest time of night. It’s worse than midnight, when all the animals come out to play. That’s when you face the ghosts, the bad memories that won’t leave you alone, the ones you can’t exorcise from your soul. Those ghosts are always needy and desperate, like a lot of people. Things happen to average people when they’re desperate. It drives them to do things they’d never think of doing when they’re rational.

Those are the people you watch out for.

Vic Fallon, on the other hand, is a throwback to the pulp fiction characters of Chandler, Hammett and Westlake, but in a contemporary setting. Vic is a tough wise-ass who always finds himself in unwanted situations, and his cases can take him anywhere. The women he meets are straight out of an old B movie where the hero takes one on the chin in the name of love. This is the opening from his latest adventure, Lido Key: 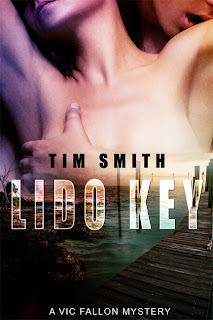 I had the craziest damn dream. I was standing on a cloud of white satin while angels strummed their golden harps all around me. I swear one of them looked like Taylor Swift. Then this guy showed up, dressed in a double-breasted blue pinstripe suit and a gray fedora. Looked like he stepped out of an old Bogart movie. No, wait, it wasn’t Bogart, it was Robert Mitchum. Yeah, that’s it. Mitchum handed Taylor a bottle of cheap whiskey and she poured a healthy slug into a tumbler. She smiled when she handed it to me, you know, one of those smiles that tells you everything’s okay even though your gut tells you it isn’t. I drank it down in one swallow then felt lightheaded so I curled up on that satin cloud and fell asleep. Probably shouldn’t have eaten sushi for dinner last night.

Vic Fallon slowly awoke from a deep slumber and looked through one drowsy eye at the clock radio. 8:30. I never sleep this late. Must’ve been more tired than I realized. He stretched his arms and yawned. I never sleep this well in a strange bed the first night away from home, either. He swung his legs over the edge of the bed, blinked a few times to wake up then looked around. His brow furrowed. This isn’t where I fell asleep last night.

When I come up with a story idea I have to decide which series it would best fit. If it’s drawn from current events, it would probably work as a Nick Seven spy adventure. If it’s something quirkier I’ll develop it into a Vic Fallon crime caper. The online consequences of sexting inspired Lido Key, and the Wiki-leaks affair served as the jumping off point for Never Look Back.

Someone proposed a wild idea to me recently. They suggested that I put both characters in the same story. Hmm, Nick versus Vic. What a concept! I could also throw in some supporting characters named Rick, Mick and Dick to really confuse things.

I've never written a series, but I can see how you might have some significant decisions to make with two fully-fleshed characters like Nick and Vic.

Do you ever wish, though, that you hadn't given them rhyming names? I do like the idea of having them meet in a book, but I think readers might get confused.

Anyway, thanks for sharing a bit of your craft with us!

"A rose, by any other name, would smell as sweet ..." quoth the Bard - but for me, my Name is a personal thing and the one thing which is guaranteed to set me on the warpath is when someone (usually a junkmail sender) SPELLS IT WRONG!!!! For me this is what the Bard would have called "the deepest cut of all" and totally UNFORGIVABLE.

One 'inspiration' I've used for Names in my stories is an alphabetical Class List of the names of everyone who was in my class (33 pupils) at my Alma Mater. As I've only met one or two of them since we all went our separate ways to University (1969)there isn't much risk of anyone objecting (and I don't use these Names for my Villains anyway!)
Regards
Paul McD

Choosing names for characters is like naming your child. You want it to be appropriate, but until the story is completely done, you're not sure the name will fit. I've even changed a character's name part-way through writing the book because it didn't suit anymore based on the actions.
Interesting concept, putting 2 characters from different series' together. But since yours are both bad-asses, I wouldn't think they'd get along. Hard to have 2 alphas in the same room without them wanting to see who would win!

Hi Lisabet, I had a question for both you and Tim.

My mother and I are collaberating on an idea she had for a story we have a first name for our male character that we both like, trouble is she'd like him to have a last name and I don't really know how to help her come up with a name that wouldn't be too difficult to say but would still go well with the first name.

So my question is what do you guys do to come up with a decent last name that doesn't as Tim said "conjure a preconcieved image."?

Do either of you do anything specific to help you come up with a good last name?

Thanks for having me today, Lisabet, and to everyone for the comments and questions. I had a fleeting thought of changing Vic to something else but it just seemed to flow with the name Fallon.

Gabby, when I devise a last name for a character I look at a few things - ethnic background, something unique but memorable (as opposed to Smith LOL), and one that may fit the physical description. I recall "The Dirty Dozen" where one of the characters was named Maggott, and it fit the personality. I've never gone that far, even with a villain, because it was too descriptive.

And Fiona, you're right - put these two characters in the same room and one of them would wind up dead.