My Book, My Nemesis…


First, let me say thank you to Ms. Lisabet Sarai for hosting me today. I'm not much of a guest blogger because, well, I feel like I really don't have much to say that would be interesting. But I wanted to share the history of The Last Pyr of Eden and how far it came. Not to mention how it nearly took me out and crushed my spirit.

Originally finished in 2010, it sat collecting dust on my hard drive for almost two years until I subbed it this past summer. It was called Ethereal Heat back then and it was my nemesis. This manuscript had literally put me through Writer Hell. It tested my strength, my resolve, and nearly broke me. This story wrenched tears from me and not in the joyful sense.

My idea for this story was sound; my series plot was played out to the end. I started writing it and I spent most of 2009 "perfecting" this story that I deemed my best work at the time. Then, my computer crashed and I lost everything, I was devastated. I was 30k into this great story, and then I was down to nothing. I was depressed for weeks to the point that I didn't write anything or jot down ideas. I just moped about the apartment feeling sick, looking like a zombie when all I wanted to do was write the next scene. It was as if the computer virus killed me and my characters too.

But there was a ray of sunlight.

I took my computer to get fixed and nearly kissed the tech guy who told me they were able to pull my work from the hard drive. I waited for three days to get my recovery disks. I was so excited that I'd be back at it; I'd be crafting this fantasy story again. I went out, rented a computer and squealed like a captured pig when my book files sat nice and pretty in this protected folder. I opened it up, lost only 5k, but I couldn’t be happier. My mom bought me a USB, I was saving every five minutes. I was pushing 45k, things were back on track.

One morning, I plugged in my USB and it was empty. It was okay though because I'd saved on the computer too, right? Nope. I'd been only saving on the USB, which was now blank. My mom called the store which she bought the USB from, and lo and behold my USB had likely come from a batch that was proving faulty. Panicked, I freaked and descended to the self-sorrow again. I was back to the 25k saved on the recovery disk. I lost another 20k on this story. Gone. I was even more distraught. I stopped writing, I was proving useless at it anyway. A few past projects were rejected via agent and I was stuck in this Write and Obliterated limbo with my current WIP.

My husband noticed I hadn't written anything in about a month and I told him that I wasn't getting anywhere. So why even bother. Wrong words to say to him obviously because he chewed me up and down about not quitting and he basically pushed me back into the chair and told me to finish it. My mother provided me with encouragement as well but I didn't want any of it. The only way to get them to go away was to write. I grumbled the first two days. I hated all my characters because I knew where they were supposed to be in the story and they weren't there anymore. I finally got back up to 40k and felt a little better. I kept chipping away at it and finally I had an 85k piece of crap. (I can say that because it was my novel and it was true.) I felt good, though. I polished it up (horribly) and started subbing it.

My query letter got a few nibbles from agents that requested partials. You don't know how happy this made me. I can still see me and my mother rushing out to Kinko's at ten pm to make copies. Those agents liked the plot of the story but ultimately said no. I was disappointed but not crushed. I was so used to hearing no that it hardly phased me.

I knew I had more learning to do; it had everything to do with my technical writing and grammatical issues. I put Ethereal Heat aside and worked on other things, novellas, short stories, and I started subbing to e-publishers. After a few months I met the right friend that helped me see the mistakes that I was missing. She doesn't realize how special she is to me. Finally, after learning a little more, I started getting some contracts, learned more things by my past editors and other author friends that I was lucky to obtain along the way.

In 2012, I opened the file I hadn't opened since receiving my last rejection in 2011. I looked it over with a better eye for detail and got to work fixing it up 2012-style. I chopped it down, took 30k out (funny, isn't it), gave it a new name, and subbed it to the e-pub world. Total-E-Bound picked The Last Pyr of Eden up so fast I was left feeling like I read the acceptance letter wrong. It couldn't be a yes. Yeses didn't come that fast and nothing had gone right with this book, nothing. How did it finally get to the point of acceptance? I was still asking myself that question through the edits. How did my nemesis book and I make it to this point. My answer came when I had to type out the dedication; it was my mom and my husband. Without them, my newest release wouldn't be out for all to see 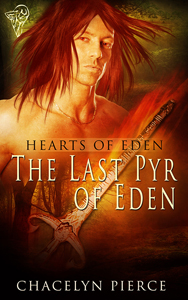 Outside the protected gates of Eden, ancient enemies lurk in waiting to drain elementals of all their power.

For eons, the four elementals have bled their nourishing blood to sustain life for superior spirit elementals known as Daemons. No race has suffered in despair as critically as the fire elementals—the Pyr. Their numbers dwindled down so miserably, that Raynor is the last known warrior of the race, living on a faint hope that there is more of his kind between both worlds. He ventures out constantly searching for elementals to save from enslavement. In reality, he searches for a female to bond with. After a yearlong trip away from Eden—an elemental settlement hidden deep in the woods—he is immediately confronted by the enchanting Sylph, Samira. She ignites desires and emotions in him that he considered long dead and nearly destroyed like his people. Indulging in his erotic cravings with Samira can be a daring game to play, because elementals have never intermingled in all recorded history

A rocker by heart, Chacelyn Pierce is constantly ear plugged with heavy tunes blaring to stir up the phantom personalities that swarm her mind. It’s no surprise that she enjoys writing and reading to satiate her appetite for the male antagonist in a story. Married to a blatant redhead and mothering a diva, there is never a dull moment in the house. As a native Texan, she doesn’t personally own a horse but follows the unwritten southern rule of knowing how to ride one. When she’s not testing the emotional capacity of her characters, she works part time as a dog groomer.

Thanks for hosting me today!

I shuddered at your tale of multiple losses of your work. Once or twice I have experienced that sort of thing on a smaller scale - not due to hardware failure but my own errors - and I so identify with your feelings of rage and helplessness. I truly admire the determination that forced you to finish the book (and I applaud both your husband and your mom). May The Last Pyr in Eden achieve the great success it deserves, after all your efforts.

And may you never have another book fight you so hard!

Fascinating ... that only happened to me once - couldn't fathom why when I opened the file I was working on - it was my 3rd book - there was nothing there but gobblydegook - ancient Egyptian - or something equally horrible. After a rather over-the-top reaction of screaming fits I called a computer geek friend who salvaged most of it - thank you Erick - and I managed to finish A Portrait of Andrew.
I totally empathise with you - it's agonising when you think it's all down the drain. Never trust computers is my motto.
Good luck with your release - wishing you much success. Cheers, JP

I'm glad you persisted. We all know despair sometimes for various reasons, but I think it's important to keep going, otherwise you can't grow and hopefully flourish.

Thanks JP, I'm glad you were able to save your book as well. :D

So true Jan, I learned to just keep going and quitting isn't the way to solve the problem. :)