The Way It's Supposed to Be

The title, first line, and character sketches had been sitting in my notebook for more than a month. I knew that I had to get the thing done yesterday, because the deadline was the 10th, while I had other commitments Monday and Tuesday. I didn't feel a sense of pressure, though. Somehow I had confidence that I could simply sit down and let the story out. And that's exactly what happened.

It may not be the best tale I've ever written, but I'm pretty happy with it. The story is called "Layover"; it follows the relationship between a sexy, athletic airline steward and the older female pilot who recognizes submissive tendencies he never knew he had. Not exactly romance - but I'd say it has a happy ending, in that each of the characters gets what he or she wants ;^)

Writing is never "easy", but this tale flowed more smoothly than most. And that's the way it's supposed to be. I love it when the barriers between my imagination and the page crumble. The experience of writing so quickly and confidently is an incredible high.

I only wish my writing was always this smooth - but perhaps I would stop appreciating the peak experience of being "in the zone" if that were true.

Anyway, I just wanted to share what feels to me like good news. I won't know whether the story has been accepted until the summer. So it's time to put it out of my mind and move on to my next project.

Speaking of D.L. King, though, I just learned that her steam punk collection Carnal Machines as well as Kristina Wright's Steamlust collection have received a "seal of approval" from Hustler magazine. Both books include stories by me ("Her Own Devices" and "Green Cheese" respectively). Kind of exciting to be recognized by a nationally known purveyor of smut! 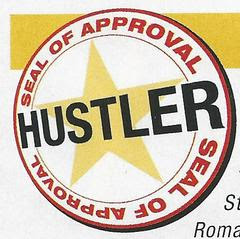 Posted by Lisabet Sarai at 1:31 AM