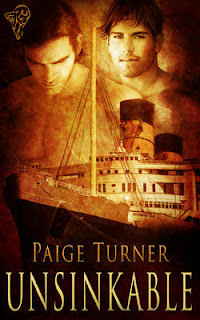 A hundred years ago, yet the disaster remains fresh in our imaginations, perhaps because there are so many surviving eye witness accounts that one can easily read about what it felt like to be aboard the doomed liner as she disappeared with frightening rapidity into the waters of the Atlantic. 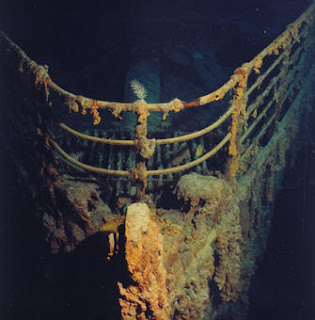 And yet little more than a decade earlier, the longest-reigning English monarch died . Only two years after the Titanic sank, the globe was plunged into the Great War , two years of bloodshed that took some twenty million lives. It was in 1903 that men first took to the skies and in 1915 Typhoid Mary unwittingly infected twenty-five people and was placed in quarantine for life.

The early twentieth century was full of incident – sometimes tragic, sometimes fascinating, sometimes surreal. So many things happened that don’t necessarily get the same attention as the sinking of the Titanic – but perhaps they should. What incident, event or personality from the early twentieth century would you like to see explored in print? Let me know in the comments for a chance to win a copy of Unsinkable and a pack of replica Titanic ephemera. 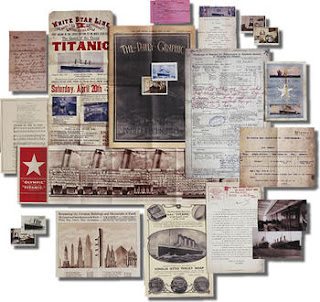 Blurb for Unsinkable by Paige Turner

The world had never seen anything like the RMS Titanic - enormous, opulent...and unsinkable. The Ship of Dreams.

Ted Dorley, confidence man, is looking for a new life in the New World, and relishes the opportunity to mingle with the great and the good of the day on board the RMS Titanic.

He expects to find fortune, and perhaps to find fame, but he doesn’t expect to find love in the arms of dark-eyed cellist Robert Briceaux, one of the Titanic’s band of dedicated musicians.


When the ship strikes an iceberg close to midnight in the middle of the Atlantic, passengers panic and the crew try to keep calm...as the band plays on. As the Ship of Dreams disappears into the calm, black waters of the deep, has Ted lost his new-found love to the icy embrace of the ocean?

Robert was spun around in the crowd as a steward barged past him, so loaded down with cases and hatboxes that he could barely see over the top of them. He held his cello case closer to his body, protective of the instrument in this monstrous crush. His cello-and his hands-were the most precious things he had. So many people had wanted to see the launch of the RMS Titanic that tickets had had to be issued to keep the crowds under control. Robert could quite see why.

It was a bright, brisk April morning, and Robert had to squint against the sunlight as it struck off the myriad windows of the magnificent ocean liner. She was immense, making the other ships docked nearby look like toys beside her elegant bulk. The sheer size of her was enough to turn Robert into a bundle of nerves, and he peered anxiously through the throng, looking for the upright figure of Wallace Hartley, the band leader, with his long face, always composed, and his dark hair. Robert liked Wallace-most people did. He was a friendly, gentlemanly sort, and Robert would feel more at ease once he had found him. Failing that, though, he'd be pleased to see anyone clutching a violin case, because that would mean he'd found one of the other professionals who would be providing musical diversion for the passengers on the Titanic's maiden voyage.
He'd been performing since he was a boy, but suddenly, amongst these hundreds of people, he felt a queer sort of stage fright that made him feel slightly ill.

Even a stranger would be a welcome sight. There was a kind of brotherhood among the musicians who played on the liners. They looked out for one another. They had to, with the agents giving them as few rights as possible and the White Star Line washing its hands of the whole affair. Still, there were dozens of cellists who would have jumped at the chance to take Robert's place on board the Titanic.

The porters were bustling around the dock. Near where he stood, a harried-looking pair were loading crate after crate of lettuce—what must be thousands and thousands of heads of the stuff. He thought about the other supplies that they must be loading—magnums of champagne, barrels of oysters, sides of beef. As he watched in wonder, a small boy tried to sell him a postcard of the ship. It was a picture of the liner sailing out from Southampton, tinted with watercolours. He shook his head and the lad scampered away, unperturbed, to tug at the skirts of a stern-looking elderly woman in old-fashioned black bombazine.

The passengers and crew were all sorts, from babes in arms to the very elderly, and grubby-faced stokers still smelling of beer from their celebrations the night before to debutantes decked out in furs and jewels. But Robert couldn't see the other musicians anywhere. How could he expect to find anybody in this insane crush?

As Robert pushed his way towards berth forty-four, he was startled when a pleasant voice called his name and he turned to see a young man juggling the handles of two violin cases in one hand and extending the other in enthusiastic greeting. Robert fidgeted where he stood, like an excited kid.

A gangling kind of chap, with curly blond hair, pale eyes and a friendly grin, he seemed to give off a sort of contagious energy that Robert immediately found appealing.

Still, he heard the caution and reserve in his own voice when he confirmed, "I am Robert Briceaux." He felt a little self-conscious about his French accent, which was still very pronounced even after his time with an English orchestra. Still, he'd been told he'd been selected for this voyage partly to add a sense of authenticity to the Café Parisien, where he would play as part of a trio, so perhaps it was just as well that he'd never been able to get his tongue around the plummy vowels and clipped consonants of the British upper and middle classes.

"John Hume," the curly-haired youth went on gaily, "only do call me Jock-absolutely everybody does. I'm first violin. I've already met Wes—that's the other cellist-so when I saw you struggling with your kit I knew it must be you."

Robert found himself swept along in Jock's wake. He envied him his effortless, effervescent self-confidence. The crowds seemed to part for him as he gestured expansively with his free hand, babbling with good-natured excitement about the expense and glamour of the ship they were about to board, from the thousands of pieces of silverware to the fully-equipped gymnasium and the heated, salt-water swimming pool.

Robert didn't suppose there'd be a great deal of time for them to explore the ship in between playing, and in any case he wasn't the best of swimmers, but Jock's excitement was palpable and Robert found his spirits lifting. Jock seemed like somebody who'd be easy to get along with. He hoped his other companions would be as agreeable.

He was a bit flustered and out of breath by the time they reached berth forty-four. His cello was bulky and as he tried to keep up with Jock's long, energetic strides, he limped slightly, the legacy of a motor bicycle accident. He was only glad it had been his leg that had been injured, not his hands. He hadn't ridden on one of the machines since.

By the time Robert and Jock had found the other members of the ship's on-board orchestra, the first of the passengers were starting to board, swarming up the second- and third-class gangways in excited, chattering groups, pushing perambulators or scolding children.

Wallace Hartley greeted them warmly and presented them to their fellows. The other cellist was Wes Woodward. He had a soft, unexceptionable sort of face, small, round eyeglasses and a moustache that was waxed into points at the end. He was perhaps in his mid-thirties, and a little stiff in his bearing, though not unfriendly.

What a great concept for a story. I hope it has a happy ending -- one never knows with the Titanic. I wrote a blog for its anniversary, about what it must have felt like, and had many responses. This incident occurred the year my father was born, only a few days before his birth, and perhaps for that reason seemed altogether personal. Thank you for sharing your book excerpt. It looks wonderful. I'm a fan of m/m romance and Unsinkable sounds good. I'd like to read a story set around the Hindenburg incident. One in which the heroes or hero/heroine don't go up in flames -- except in a good way. ^_^

It gives the thoughts of Ghost Ship with the old dresses and old band music. So this is a great book to look at the Titanic from a different view.It will on the top of my books to read.
horseunicornkey@aol.com