“Maybe you’ll be lucky. Maybe he’s not human. He’ll take you in his arms and you’ll feel his strength – a strength that makes it impossible to fight him. But you’ve already lost the will to resist, that moment he looked into your eyes and showed you all his hunger and his promise. You knew then. You knew that this is what you are for – what we are all for – with our warm beating hearts and our aching sexual needs.

We are for them.” 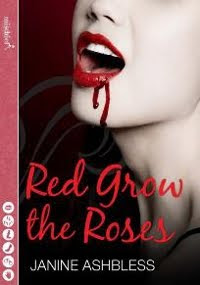 There are six vampires in the city. Ageless, terrifyingly beautiful and always hungry – not just for blood but for the other pleasures the human body offers. Sadistic chanteuse Estelle; feckless Ben; Roisin, the mirror-ghost; Wakefield, haunted by his own damnation; Naylor, the most feral of them all.

And Reynauld is the Good Shepherd, the one who holds them all in check. But his grip on his own humanity is fading, and when Wakefield accidentally kills a woman and Naylor gets the blame, a power-struggle erupts between the city’s immortal undead.

Red Grow the Roses tells of bloodlust and sexual desire; for vampires the two are indistinguishable. These transgressive, startling stories draw the reader down the darkest and most seductive paths of pleasure – to where the monsters are waiting.

‘That’s what I heard. I just find it hard to believe.’ Rolling onto her knees, she reached for the discarded rose he’d cut for her. ‘Nasty sharp thorns these things have got,’ she mused, laying the stem across her bare breasts. With a twitch she drew it down, scoring her flesh with half-a-dozen needle-pointed thorns, shuddering as the pain burned through her. Pin-points of blood rose on her pale skin and swelled, a string of rubies decorating the white flesh and the roseate nipples. ‘Ah,’ she groaned.

Robert Wakefield seemed to grow taller; his hard-on bulged. She could taste the coppery tang of her victory.

‘Tell me; have you ever whipped a girl with your roses, Mr Wakefield?’ Lilla began to crawl backwards from him on hands and knees, arse swaying, breasts wobbling. ‘Maybe one of your servants? The parlour maid perhaps? You ever taken a bunch of roses and whipped their tits?’ She put on a country accent for her next words, her voice suddenly breathlessly innocent but at the same time teasing: ‘Oh Mr Wakefield, you wouldn’t be thinking of doing that to a poor innocent girl? I couldn’t bear that sir – it’ll hurt something cruel. You wouldn’t want to ruin a helpless maid, would you, sir? You wouldn’t want that on your conscience?’

Inhumanly swift, he lunged and grabbed the front of her bodice and yanked her up to slam her against one of the wrought-iron pillars. Eagerly Lilla extended her hands over her head, thrusting her breasts out so that he might feed. But he didn’t, not right away. He looked down at her with a face hollow with hunger, and then he took hold of her long drawers at the waist and snapped the drawstring with one tug of his wrists. He tore the damp, clinging cotton from her thighs to bare her sex, and then he tied her wrists with the twisted strips and secured her to a ornamental bracket high on the pillar, hauling her up onto her toes. She said nothing, words robbed from her by anticipation, lips parted about her shallow breaths.

His face mask-like, his eyes burning, he plunged his cold fingers between her thighs and up inside her, breaching the gates of her sex to take the measure of her heat, the slick of juices, the yielding sucking flex of her tight hole. Lilla writhed on his hand, twisting helplessly with each thrust of his wrist, and he watched her breasts jiggle and bounce, their pink points dewed in red. His teeth were so extended now that his upper lip did not hide them. 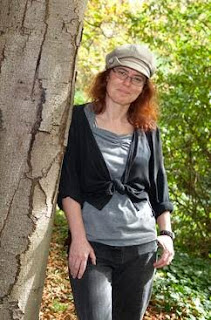 Welcome to Beyond Romance, Janine!

This sounds delicious! I have lots of vampire fans among my readers - I know they'll enjoy Red Grow the Roses.