Since Victoria has posted a vampire snog today, I thought I'd do so too. This snippet is from my short story "Vampires Limited", in the Black Lace collection Lust at First Bite.
Be sure to visit Snog Central for links to lots of other sexy snogs.  And tune in tomorrow, here at Beyond Romance, for an exciting announcement related to vampires! 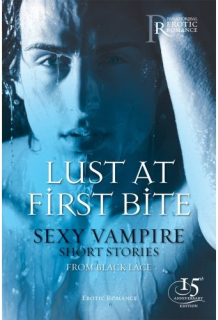 Lara knew she should be frightened. She should get out his seductive presence before she made a final, incorrigible mistake. The risk, the pure reality of it, only made her want him more. He was watching her. She could feel his eyes on her lips, on her throat, on the rise and fall of her breasts as her breath quickened.
She glanced around the bar, filling up now that it was after five. Donnie’s was not known as a “blood” bar, but still, she noticed half a dozen men wearing capes and pale make up, plus two or three women in slinky black dresses and wigs. It was pathetic, the way they all craved a fleeting taste of inhuman power, a brush with immortality. And here she sat, thigh to thigh with the genuine article.
‘I don’t fully understand it,’ Jim said, obviously catching her thoughts once again. ‘Why would they want to be me? Power’s nice, but overall, I live a pretty lonely and miserable existence.’
‘Maybe – maybe I can make you a little less lonely. For a little while.’ Lara cradled his cheek for an instant, then pulled his mouth to hers. His lips were soft as any flesh, warm and muscular as they met and molded to her own lips. She tasted the wine he had been drinking, with background flavours of iron and salt. His tongue, too, felt human, jousting against hers, exploring, questioning.
Her rigid nipples pressed rudely through the stretchy fabric of her top, pleading for his attention. Of course he knew what she wanted. Without breaking the kiss, he cupped both breasts, tracing symmetrical circles around the tips. Her pussy clenched. Her thighs opened involuntarily. She rocked back and forth on the bench, rubbing her clit against the hard wood.
‘Please,’ she moaned against his open mouth, and then was silent, realising that she did not have to say anything. He broke the kiss to throw a twenty pound note on the table, then pulled her to his chest.
‘Imagine your apartment,’ he said, close to her ear. ‘Think about your bedroom. And hold on tight.’
She took a breath and was swallowed by sudden, utter darkness. She could feel the bulk of Jim’s body pressed against hers, but she could see nothing. A howling wind tore at her clothes. Her ears rang with the clang of a hundred untuned bells. Fear rose in her throat, but before she could scream, it was over.
Light returned. She stood on the shag carpet in her room clutching at Jim’s shirt. Her knees buckled. He held her up, held her against him.
‘I – what – how – ’ she babbled.
‘Hush, Lara. There’s no need for talk now.’ He bent to kiss her again, and this time she felt the fire stirring deep within him. She sensed his unnatural strength as he lifted her onto the bed and knelt between her legs. He peeled off her tights and drew down her soaked knickers without comment. She felt the air stir as he bent his mouth close to her yearning pussy, but no breath. Her clit beat like a tiny heart, swollen with blood. She knew that he could smell the blood through her skin, that for him it overwhelmed the tidal scent of her sex.
Take me, she thought. Before the idea was fully formed, his tongue was gliding through her slit, slithering among her folds, lapping at her juices as if they were in fact the fluid that he most craved. She arched and twisted under him, opening herself to him body and mind. He stabbed his tongue into her depths, then pulled back to suck hard on the aching bead of flesh at the apex. Sensation rippled out from that center to all her extremities.
Posted by Lisabet Sarai at 2:30 AM

Ooooh, wonderful!Thanks for joining in the fun and bringing some more vamp fun to the occasion!