Before I get into my guest post, I want to thank Lisabet for having me on her blog today for my Crystal Illusions release tour. I’ve decided to talk about something other than writing today, something that happened recently and warrants a mini-rant…

Ever wonder if your husband or significant other has started taking "stupid pills"?

Well, I began to think my other half has started a regiment of them after the following conversation…

Him: “Don’t go grocery shopping until I get home.”

Me: “Okay. Any particular reason?”

I had no snappy comeback, just went completely blank at the gross stupidity of that statement.

I have been the one grocery shopping for our family for at least twenty years because he hates to shop.

He’s very lucky I wasn’t near any sharp, deadly projectiles because I’m fairly sure he would have received a lethal dose of something after those words tumbled from his lips.

Instead of reacting, I just said okay and watched him leave for work. You can bet I was on the phone with my sister within minutes, ranting about his sheer lack of intelligence. But I decided to try to see the humor in his statement and keep an open mind. What exactly could he teach me?

He wanted me to use coupons.

I used to but then the benefits started to diminish. When they started requiring you to buy three or more items to get a dollar off and when double and triple coupons went by the wayside, I stopped using them. So, he clipped coupons and wrote out the grocery list and off we went. He really had no concept of what groceries cost now-a-days, and his little adventure in couponing didn’t net as much as he thought. Yes, we saved enough to pay for a couple gallons of gas, but it wasn’t in the realm of extreme couponing like he thought it would be. I also had to keep him in check every time we passed sale items, because we didn’t need the “buy one get one free” items.

I never mentioned how irritated I was at this, but it’s not the only sideways thing he’s done lately and I’m beginning to wonder if this is some sort of weird mid-life crisis or if it’s just the reality of college sticker shock. Yes – our oldest is heading to college in the fall and I think this is the root of his intelligence lapses.

Either way, I still love him - despite the sudden onset of stupidity.

Hopefully his little antics will pass and he’ll get back to the even-keeled man I’m used to. If not, I might just have to hit him upside the head with an iron pan. 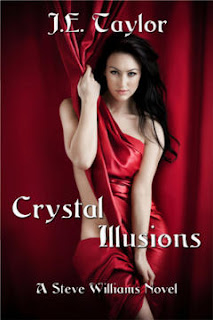 Thanks for swinging into this stop on my Blog Tour and I hope you’ll stop by Bitten By Books on the 20th for a chance to win a $50.00 Amazon gift certificate and if you’d like to check out Crystal Illusions, you can purchase it here on Amazon.

Greetings, J.E., and welcome to Beyond Romance!

I absolutely love your cover. I wish you'd talked a bit about the book - though I found your tales about your husband a hoot!

Yep, totally sounds like my husband. He couldn't understand how I spend $200 a week in groceries every week. He went with me and was shocked. He said "Milk is higher than gas". I laughed so hard. Thanks for sharing. At least I now know I'm not the only one who wants to smack her hubby upside his head!

Here's the blurb for Crystal Illusions:

Assistant D.A. Carolyn Hastings has an uncanny knack for putting away criminals. With one of the best prosecution records in recent history, her future as Manhattan’s next District Attorney looks certain. But her sixth sense for winning cases threatens to work against her when she starts seeing a string of murders through the eyes of the killer.

With suspects piling up as fast as bodies, and the motives of those closest to her questionable, Carolyn doesn’t know who to trust.
When the FBI assigns Special Agent Steve Williams to the case, Carolyn discloses her deepest fear - that the man she loves may be the one responsible for the city’s latest crime spree.

The only thing Steve knows for sure is Carolyn has an inexplicable psychic connection with the killer, and all the victims have one thing in common…a striking resemblance to Carolyn Hastings.

And he knows it’s only a matter of time before this psychopath knocks on her door.

I think it's the big publisher push and if you look at the Amazon ratings - there are more five star reviews than one star reviews. Although after looking at the sample - I fall into the one star grouping.

I believe in strong female characters - Jessica from the Games series lands in that group - same with Carolyn from Crystal Illusions. So reading the portrayal of (I can't even remember her name - which means she was forgettable) in Shades of Grey irked me.

Rhonda - it's funny how men think at times and I know my husband is a little stressed about college costs - the good news is he's starting to relax a little since I wrote the post. :)

Lisabet - Thank you for having me here today. :)

I think husbands have their own way of thinking that has nothing to do with the real world.

Good luck with your release.

Loved that post. I think you should use the iron pan just on GP (general principle). That's one reason I don't use as many coupons as well. But I do manage to take advantage of sale items or buy in bulk. I've got three growing boys to feed and that's not easy somedays. :-)

Congrats on the new release!

This was funny because I had pretty much the same experience. I only clip coupons of items I use constantly, but the savings usually only equal the tax I might pay. However, I usually end up leaving them at home because I'll decide to do shopping after another appt so I don't have to go back out after I get home.
Loved the cover and the excerpt. Have added this to my tbr wishlist.
Patricia
panther.ravens@yahoo dot com

Janice, W. Lynn and Patricia - thank you for stopping by. Patricia - I'm a lot like you - most of the time grocery shopping is combined wiht another task and I usually forget the coupons at home - or the coins that my grocery store gives out that act like coupons.

Thanks again folks - it's been a fun day and it's nice to know I'm not the only one saddled with a man who sometimes doesn't use his brain. ;)

Congrats on your new release JE! I just checked it out on Amazon and it looks really good! It's on the top of my TBB list! :)

And good golly Miss Molly...I thought my Hubs was the only one with the prescription for stupid pills!! LOL This post was so cute and so close to home. *shudder* ;)

Thank You JE for the post and Lisabet for having JE on your blog.

Kim - thanks for checking out my book and swinging in to comment.

Have a wonderful weekend!