How to Write Sexy Steampunk Stories

I guess like any genre, going in, read a few of those that are out there. Make sure you do enjoy them, with or without the sexy bits. Look at graphic novels even, as they are very inspiring. There are also a lot of scrumptious websites like steampunkery that will show some of the prettiness that steampunk can have.

Check out steampunk images. I'm very visual in my descriptions and 'seeing' it in my mind's eye helps. If you've got some eye candy -- steampunk version -- already stored in the noggin, it helps.

Here's the blurb and a little sexy snippet from Lust Plague: 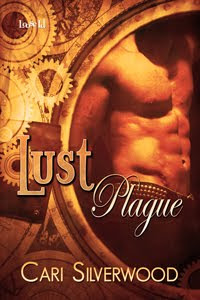 Saving the world should be easier.

When airship captain Kaysana meets Sten the last thing she wants to do is have mad rough sex with him while bound by ropes and clamps…but fate pencils in their appointment.The lust plague strikes. From her infected crew, zombies arise.

With her ship gone, she must rely on Sten, a human clone, a man who has fought all his life to master himself. She despises his kind and detests Sten’s growing hold on her. Though he never takes no for an answer, surely it’s the plague that makes yes slip from her tongue like melted butter? Or should she blame her own traitorous heart?

Hordes of slavering zombies await them. Sten and Kaysana unlimber weapons, don goggles, and set a course for the origin of the plague. Yet victory will be hollow if they cannot also solve the puzzle of their hearts.

“Stay still,” Sten said quietly, firmly, then put his hand to her bare back and felt her jerk at the press of skin to skin. The transformation made his dick quiver as always, and damn, he was already hard. The way Kaysana’s face changed fascinated him. It was like watching a flower unfurl. The hardness, the wariness, drained away. Instead she looked at him with adoration and acceptance in those toffee brown eyes.

Yet after a few seconds, he saw awareness return. This is new. She’s resisting this thing that affects us. He didn’t bother trying to resist anymore. He wanted her, knew he would’ve anyway. This just made it easier. The Zen let him see the truth. Having Kaysana kneel at his feet -- this was his fantasy, want, need…whatever. Having her want him back sent his libido soaring into the stratosphere. Done deal.

The intriguing thing was watching her wriggle to get out of it. To deny her needs.

“Come.” He tugged, then towed her to the front of the rooftop by the leash wrapped in his hand.

“Sit here. Stop trying to push me away. You’re right. Last time I touched you, those zombies zeroed in on us like flies to…” Blood.

Keep your shit focused. Zone them out. Zen, man, Zen. Took him a few hard seconds, but he managed. He had to. Their lives depended on this working. The difficult bit was keeping her in a mental space where she forgot.

At the touch of his hand on her shoulder, she sighed. Quivering with need already? Her smart, thinking side was clearly miles away. He spread his fingers on her warm skin and smiled.

If not for the effects of the plague, this would never have worked. The zombies waiting below to rip them apart weren’t exactly love potion ingredients.

Sten pressed his palm on her nape, made her kneel, turned the leash around his fist until his knuckles brushed the angle of her throat and jaw. He bent down, staring at her. Her gaze went all gooey, her pupils dilating, gorgeous -- if he could’ve bottled that, he would’ve.

The feel of her soft lips under his near unhinged him. Their hot breaths mingled as he explored her mouth. At first passive, then she struggled a little and tried to pull away. With his hands at her neck and throat, he held her to him. “No,” he whispered, licking the corner of her mouth. “You’re not going anywhere. I’ve got you.”

Then he crushed her resistance, shoving his tongue between her lips, taking over her mouth with his while he slid his fingers into her hair. He turned his hand to screw those fingers into the roots, wrapping hair about each finger -- harder, tighter. When she gasped and her mouth fell open, he knew he had her. He kept at her. Not until she moaned uncontrollably into his mouth did he let up and slowly lift away.

If you want to know why in hell they are trying to attract zombies you’ll have to read the darn book. And you might just get a chance to do that for free, if you comment on this post. I'm giving away a copy of Lust Plague to one lucky reader! (Be sure to include your email address in the post!)

In Lust Plague, I have introduced the idea of a low-burn ember chamber as a way of explaining how a gigantic automaton (think a mech war machine) would still have its steam engines ready to start despite being left in the snow for weeks... yes, don't think too hard about that one. lol Totally impossible.

I also just threw in 'boosted coal' because I felt my machines were too close to petrol engines in their behavior. So really, it's magic with a veneer of steamy science.

Imagination is king. Just try to tee everything in your story up and when something happens in the story that 'might' be affected by your steampunk science, take a while to think through how things would bounce off each other.

If you believe in it enough, your readers will.

Pick ideas that excite you. Don't just stick to Victorian clothes, or whatever, if something else grabs you. The steampunk cosplay costumes out there are astounding. And they verge on fetish sometimes. I mean little bitty leather tops with buckles are SO not Victorian. 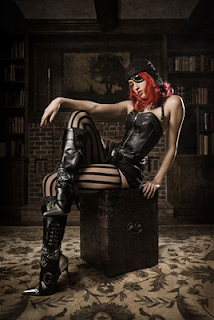 Last of all, try to find your own angle. One writer is doing it with a Chinese- Malaysian angle. It only takes a little to slant things in a new direction. No story is utterly new, but you can stamp your mark on it.

Welcome back to Beyond Romance. Lust Plague sounds totally outrageous! Steampunk zombies...Good luck with it.

Thanks Lisabet. Glad to be back.
Ahh, the zombies are only there so Sten and Kaysana have something to shoot and run away from...screaming.

Not usually a zombie book reader but this book sounds interesting and then again The Iron Duke was a great steam-punk book and my first one as well!

Thank you Lisabet for hosting Cari Silverwood as your Guest Blogger on your site today, Beyond Romance.

Thank you Cari for taking time out of your day to spend with Us & sharing such an interesting Post, "How to Write Sexy Steampunk Stories".

It was great to learn about you & your writing, since you are a new Author to me. Your writing really intrigues me, as did the Blurb. Your posted Excerpt grabbed my interest & your Cover Art just sealed it for me!!! "Lust Plague" sounds Awesome!! A book not to be missed.

I haven’t tried reading Steampunk yet, but I agree with you, it’s worth exploring...with your new release, "Lust Plague".

You are also correct...I do want to know why in hell they are trying to attract zombies! LOL I would very much appreciate the opportunity to enter your giveaway of a copy of "Lust Plague". Thank You.

Love the Idea For the Story. I always enjoy reading About how a Writer Developes a story and the thoughts and inspiration behind it.
Would Love a chance to win a Copy!
LAdystyx
LAdystyx @ Spatialfrustration . com

I'm off to bed here in Australia but just wanted to say thanks for your comments ladies.
PaParanormal fan I'm pleased to hear the post did the job so well. I never realized people would find all that so fascinating! Writing can be such fun though.

Thanks for including the blurb as well as the excerpt. I read an excerpt elsewhere this morning and was completely confused (still enjoyed the hot scene between Sten and Kaysana).

I'd actually consider this a steampunk/paranormal erotica hybrid.

I am new to steampunk but I like your description - sccifi with magic. That was an intriguing excerpt, makes me want to know what would happen next. Thanks for sharing and for the giveaway. I hope it is international.
Tamsyn
tamsyn5(at)yahoo(dot)com

This book sound great I mean you have plagues turning people into zoombies like the movie Resdent Evil. I just want to know if Sten is a clone where's the original and what happened to him?
rasco630@yahoo.com

HI CARI AND LISABETH! I'D LOVE TO READ THIS!

Tameka I invented a clone that is made from different parts. So the parts are cloned and there is no original person. My first book, Iron Dominance, revolves around Claire, a woman who is a Frankenstruct. The name comes from Frankenstein. But they aren't ugly and no stitches!

Are zombies part of the paranormal genre? OMG they would be. Lol I have written across genres then.

Sounds awesome! Ive read very few steampunk but the ones ive read, ive really enjoyed! :) Im looking forward to reading this one. Thanks for shairng! Wishing you all the best!
shadowluvs2read(at)gmail(dot)com

I have not read any Steam Punk genre books yet. I liked the excerpt of "Lust Plague".

Shadow and Jacki, I'll borrow from Lisabet above and say Lust Plague is outrageous fun :) Sexy fun too! As well as a teensy bit horror slanted.

Kaysana gets very up close and personal with some zombies and one reader of an excerpt I posted a while ago plans to read this story with all the lights on.

I have a great imagination, but have not the faintest idea how to put in a book. I really get great pleasure reading what others put together.

Like most things, writing improves the more you practice, the more you think about how, what and why, you are doing it. So much fun too, seeing your people come alive.