There are a few words I don’t like to use when writing sex scenes. One is the “F” bomb because I think some writers overuse it for shock value and it doesn’t really add anything to a realistic romantic encounter. I say that because not many women have used that word with me during sex unless it was followed by “off” or “you.” Another is a term used to describe part of the female anatomy (begins with “c,” rhymes with “hunt”) because I’ve heard from readers who said it offended them. I conducted a survey on a few chat boards to see how people felt about this, and the results indicated that a majority of women find it offensive. I’m in this game to win readers, not lose them.

Here’s where it gets tricky – how do I depict a hot sexual encounter without wallowing in the gutter or resorting to purple prose? It forces me to be ultra creative, coming up with euphemisms that make my point without being crude. This is an example from my latest release, the bestselling interracial romantic thriller Memories Die Last.

Nick stood and approached Felicia. He pulled her close and ravenously kissed her, his tongue challenging hers to a passionate duel. She rubbed his shoulders and back then moved down to slip her hands under the elastic waist of his shorts, kneading his butt. Nick moved his hands to caress her firm breasts then ran his palms along her torso. Her perfume and natural scent acted like an instant aphrodisiac, turning him into an animal. Felicia put her arms around his shoulders, hoisted herself up and wrapped her long legs around his waist, bringing her groin in contact with the bulge forming in his shorts. Nick kissed her more deeply, probing her mouth while she did the same to him. He moved his hands down to her firm ass and rocked against her, getting harder the longer they dry humped. 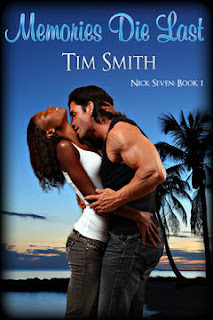 Nick carried Felicia into the bedroom and gently deposited her on the bed. He slipped off his shorts and lay next to her to resume his kissing and fondling. Felicia placed both hands on either side of his face, pulled his lips to hers and rammed her tongue into his mouth. Nick’s hand went to her breast to pinch and tweak her nipple until it was as firm as a gumdrop. Felicia moved one of her hands to his groin, grabbed his cock then squeezed and stroked him into complete hardness. Nick’s hand snaked along her belly to her crotch. He slid his fingers along her pussy, making her wetter then slipped two of them inside her. Felicia’s breathing rate picked up the longer he played with her and she stroked him faster.

Nick slithered along her body and planted his face between her legs. He hungrily devoured her moist pussy, savoring her taste. Felicia pressed her groin against his active tongue and lips, moaning her approval at what he was doing to her. Nick honed in on her clit, pulling it between his lips to suck on it while massaging her with his tongue. It swelled in his mouth the longer he sucked until Felicia gave out a loud moan and climaxed. He continued licking her after she came, enjoying her musky taste.

Nick got on his knees and assumed his position between her legs. She pulled her legs up toward her torso, grabbed his erection and forcefully guided him in. He made a long slow thrust until his entire length was imbedded inside her. Felicia closed her eyes and gasped while Nick thrust his hips.

“You fill me up,” she breathlessly murmured then began rocking against him.

Another book I wrote a few years ago, Anywhere the Heart Goes, presented a different scenario. I was looking for a unique angle so I made the heroine a well-schooled pupil of the Kama Sutra. This created a wealth of possibilities. Here’s one of the scenes between the leads, Rachel and Sam.

Rachel disappeared into the bedroom while Sam selected some CDs, settling on Tony Bennett, Errol Garner and Dean Martin. He returned to the dining room, took off his blazer and draped it over the back of a chair, wondering what Rachel was preparing. His stomach fluttered slightly in anticipation. He took another sip of wine as Rachel sauntered down the hallway toward him, having changed into a short red satin robe that came to the top of her thighs. She locked her eyes onto his, giving him a smoldering gaze and a look that broadcast the words “I want you.”

She held out her hand. “Come with me,” she softly commanded.

Sam took her hand and followed her to the bedroom, which was lit by three strategically-placed candles, all emitting the scent of mandarin. The bed had been turned down, revealing white satin sheets. Rachel took hold of Sam’s shirt, pulling it from his waist. He slid it over his head while she unbuckled his belt, followed by his pants. Sam kicked off his shoes, stepped out of his pants and briefs and dropped his shirt on the floor. Rachel untied the sash to her robe, letting it flow open and stepped closer. She pulled his face down toward hers to kiss him, moving in so close that her breasts made full contact with his chest. Sam felt himself involuntarily respond, his hardening erection rubbing against Rachel’s pubic area. Rachel pressed her mouth against his like his tongue was the vermouth to complement her gin.

He placed his hands under the robe, running them along her smooth back. Rachel put her hands on his upper arms and gently pushed them down so that his hands rested on her butt while she continued kissing him. Sam fondled her firmness, enjoying the feeling. She moved her hips against his, alternately making contact with his hard-on while grinding her ass into his hands. He let Rachel take charge, getting more into her slow seduction. After several minutes, she pulled away, took his hand and led him to the bed, where he stretched out waiting for Rachel to join him.

She stood next to the bed, the flickering candlelight highlighting her features as she maintained steady eye contact. Her hazel eyes were still glowing softly while a trace of a smile stayed on her lips. Rachel shrugged off her robe, letting it fall to the floor, and then she picked up a bottle of massage oil from the nightstand, pouring a small amount into her palm. She leaned over and began massaging Sam’s shoulders, rubbing the oil on him in a circular motion. He inhaled the fragrance but didn’t recognize it. “What is that?” he softly inquired. “Patchouli,” Rachel replied while kneading his upper arms. “It increases arousal.”

Sam closed his eyes as his breathing shifted into a relaxing steady cadence, enjoying her touch. Rachel applied a little more oil to her palm before moving to his pecs, steadily moving her hands down his torso, relaxation overtaking his body like the soothing waters of a Jacuzzi. Sam felt himself responding, even though Rachel didn’t touch his groin. She kneaded his thigh muscles, and his legs went limp. After a few minutes, she stopped her massage, knelt on the bed beside Sam and lowered her head over his chest. Rachel let her long hair barely touch his chest and stomach, then rhythmically moved her head from side to side, slowly, her hair tickling his skin as she moved downward along his body. Sam felt a sense of anticipation building within. The fragrances of the candle and oil combined with Rachel’s sensual touching techniques hit him like a freight train, derailing all control. He gasped as he felt Rachel’s mouth envelop his cock, not taking him completely in but concentrating her lips on the tip, working him as though she were sucking the juice from a piece of fruit. The longer she continued, the harder Sam’s pulse beat. His level of arousal increased with each move of her lips, long-dormant senses being awakened.

Rachel chuckled wickedly. “That’s the idea - make you crazy so it’s the best ever.”

You know, this post got me thinking. I'm not sure if I really put much thought into why I write sex scenes the way I do. I think authors can sometimes over-do four letter words. As a reader, there have been a couple of times where I am so utterly turned off by the language (especially if that kind of language begins at page one) that I won't finish the book. There is a time and a place for such language, though. Our very own Lisabet is a master of using the right naughty words when appropriate. :-)

I totally agree with you Tim, there are just certain things I would never say to a man in the middle of things and I think romance authors use the "F" word much too freely. I also don't like the "c" word and I don't really think anyone needs to use it since there are other words that can be used like the "p" word you used in your examples.

I agree with you that word choice is critical to setting the mood in a story. Some of my stories, though, call for harder or cruder language than others. It really depends on the tone and the characters.

I'm not averse to using either "fuck" or "cunt" if the tale calls for it. And though I would consider it an insult to be _called_ a cunt, I don't really find the word offensive as a label for the female genitalia. It carries some emotional baggage - but sometimes that's appropriate.

Just my opinion, of course!

Wow, what a tsunami I started! Thank you all for the comments and opinions. I agree there are times when crude language may be appropriate for a character and I've seen both of the words in question used effectively. Perhaps it's a personal preference in my case because as you read above, I'm not shy about using explicit language. For what it's worth my eighty-something mother has read all of my books - even the hot stuff - and hasn't washed my mouth out with soap.

Nice way to put things Tim. The anticipation of the climb is important when it comes to this subject. Getting to the top once you're out of breath is the rewarding part. You depict this wonderfuly without using the no no words. They suck the love right out of it.