Out on a Limb

I’ve really gone out on a bit of a limb with Bound for Glory. There are two reasons.

The first is that it’s often said that nothing dates a book more quickly than mentioning money, and the same applies to drama. You only need to read books or watch TV shows from the nineties to see what is meant. A house in London costing less than a million? Ridiculous! A gallon of petrol for less than three thousand quid? You must be pulling my plonker!

The other reason is that for ease of writing, if you’re going to write about the future, make it a long way into the future. That way you can imagine pretty well anything you like and no one can rubbish your imagined inventions. After all just look at the rate of change since the start of the twentieth century. Imagine what a first world war pilot would make of remotely piloted drones? He’d be bang alongside the idea and fighting to get a crack at the Red Baron with one if he believed it was even a possibility. But if you move twenty years into the future, you’re still within range of the possible and can only adapt what is extant in the here and now. If you go too far you risk your reader engaging their faculty of disbelief rather than suspending it.

Yet with Bound for Glory I’ve had to do both! I couldn’t skate over the auctions without some mention of price – all I can hope is that slave inflation (in a financial sense purely!) doesn’t take off too violently over the next twenty years.

To keep within people’s lifespans, twenty years was the farthest into the future I could project so I hope my nanodrones (only a bit smaller than the ones already being developed!) and the virtual credit cards (virtually already here!) don’t age too quickly. I do harbour a sneaky hope that airships will develop even faster than I’ve suggested here. I’d love to take a leisurely and quiet, low level trip across Europe whilst ambling peacefully between the bar and the observation room, to watch the Alps brush past one’s feet. Ideally it’d be nice to lean out and scoop up a bit of fresh Matterhorn snow to chill your G and T…

I had a lot of fun with transporting the arenas into the mainstream of a society coming to terms with slave-owning. The most disturbing thing was that as I wrote, I could see the seeds of some of my conceits coming perilously near to reality! 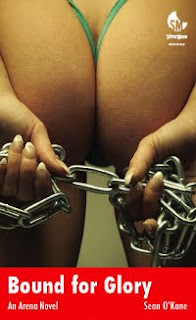 Anna Chatham’s life is suddenly ripped apart and her catastrophic fall from fame and fortune to criminal takes only a few days. And in the Britain that she knows, some twenty years in the future, when a pretty girl is condemned for anti-social behaviour, it can mean only one thing.

In his relentless drive towards power Clive Mostyn has steered through slavery legislation. Anna Chatham now faces fifteen years as the legal property of an arena. But there is a sinister purpose at work behind her downfall and as she learns to submit to her Masters, a devastatingly cruel plot is revealed.

Page-turning action as always as Sean takes us to the climactic Demolition Derby – the arenas’ latest and harshest test for its slaves.

Bound for Glory is also available from all outlets of WHSmith Travel in the UK.

He has another Arena novel planned but after that is not decided in which direction he might turn.

Sean lives a full life beyond his hours at the computer. He is keen on gardening and cooking as well as reading – he likes to see what everyone else is up to! He has many friends on the SM scene and is proud to class Francine Whittaker as being among them.

Sounds like a great read, hon, and that cover is absolutely stunning!

A warm welcome to Beyond Romance.

I recently wrote a novel set in the near future (2045), and I experienced exactly the sort of problems you describe. In my case, I was concerned that my future world hadn't really changed enough to be plausible. However, I was positing a kind of economic and social collapse, which might have held back technology.

Good luck with the book, and thanks for being my guest.