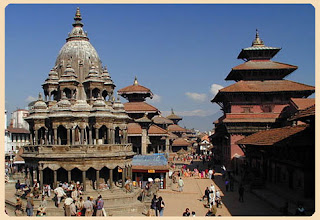 So, I'd planned to blog this week about my exciting upcoming vacation. After months of working way too hard, my husband and I decided to expand our roster of countries visited by spending eleven days in Nepal during the middle of April. This is the hottest season in the country where we live, and there are also several long holidays, so the timing seemed perfect.

We'd bought our tickets and booked a hotel in Kathmandu. We were in the process of deciding, with the help of Lonely Planet, what other parts of the country to visit. At our age and physical condition, we didn't expect to be doing weeklong treks or climbing Everest, but I'd hoped we would be able to do some short hikes that would let us appreciate the famous mountain scenery.

So my schedule for Beyond Romance this week called for me to search out some enticing photos of Nepal and share my excitement with my readers.

Unfortunately, we've had a change of plans.

Wednesday night, I tripped over a piece of construction debris. I fell. As my knee twisted painfully, I heard an ominous "snap". It turned out that I'd fractured my tibia near the knee joint.

Fortunately, I didn't have to have surgery (a bone graft was apparently an option). However, I'm now in a cast from my upper thigh to my foot, and will be for the next four weeks. 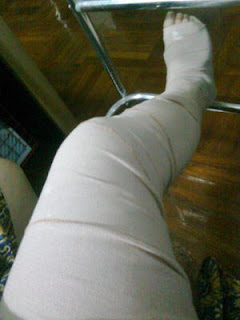 I hate this. I especially hate being unable to do some many of my normal activities - and having to ask my husband to help with the simplest things, especially carrying things around, which is hard for me when I have to be on a walker or crutches.

I'm trying to look on the bright side. I'd been stressing about how I was going to meet my commitments before leaving on the trip - two story deadlines, several articles and guest blog posts, plus my usual blogging here and at Oh Get a Grip. Presumably that won't be too much of problem since I'll be cooped up in our apartment most of the time. I'm hoping for a huge surge in productivity! At the moment, I still haven't figured out how to use the computer comfortably since my cast sticks out and forces me away from the desk...

Ah well. It could have been much, much worse. And my husband confided in me that he'd been reading about electricity shortages, poor sanitation, dangerous public transit, etc. in Nepal and getting kind of nervous! So I guess he's somewhat relieved, though we're both disappointed (and not looking forward to sweltering through April).

Anyway, there's nothing to do but make the best of it. We've been invited to a party on Saturday night, and I'd hoped to do some dancing. I'll have to shelve that notion - but darn it, I'm still planning to go, crutches and all!
Posted by Lisabet Sarai at 1:18 AM

Ouch! Wishing you a speedy recovery.

I am so sorry to hear about your fractured tibia near your knee joint & that you have to be in a cast for 4 weeks. But if you can see any light in this, at last you don't have to have surgery, that would be horrible & such a very longgggg recovery time.
I wish You a speedy recovery, try & keep your spirits up & Wishing You & Yours the Best of Health!
Take Care,
Renee'
PaParanormalFan (Renee’ S.)
paranormalromancefan@yahoo.com
http://paparanormalfan.wordpress.com

Thanks so much, Raelyn and Renee,