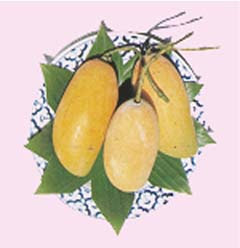 I live in Southeast Asia. I don't want to say exactly where, since the country is notoriously straight-laced and might well kick me out if they found out that they were harboring the lascivious and lusty Lisabet Sarai. In fact, I know several SE Asian countries fairly well. Culturally, they're quite different. However, they have something wonderful in common: mango season.

If you live in the U.S. you may have tasted mangoes from the supermarket. Most mangoes that I've seen there come from Mexico. They're plump and rounded with greenish-red skins, and yes, they're delicious if you can find a ripe one. However, they can't compare to Southeast Asian mangoes, at least not in my opinion.

In the old days, when I lived in Thailand, mangoes were only available in the hot season - from late February through April. That made them a special treat. Now the wonders of modern scientific agriculture have extended the "season" throughout the year. They still taste best, though, around now - when they ripen naturally.

Mexican mangoes tend to be sweet but a bit fibrous. You've got to chew them. A ripe Asian mango, on the other hand, literally melts in your mouth like custard. And the flavor! There's a complexity to the taste, a creamy richness overlaid with hints of a floral scent. As you bite into the golden flesh and the juice runs down your chin, you feel almost sinful, to be experiencing such sensual delight.

And mangoes aren't even particularly fattening - at least not compared to ice cream or donuts...

I tend to feel that it's not worth eating mangoes outside of their season. Mangoes are a consolation during the miserable, sweltering days of the Southeast Asian summer. They're a reminder to me that everything changes and that I should enjoy the delights of today while I can.

If you've never enjoyed an Asian mango ripened in season - well, I hope you get the opportunity some time in your life. Meanwhile, there's a scene in my first novel, Raw Silk, that involves a Thai mango, in a very naughty situation. Are you curious? Keep reading!

He captured her clit between forefinger and thumb, rolling and pulling on the sensitive flesh as if it were another nipple. Meanwhile, he inserted his middle finger into her soaked vagina, sliding it up and down against the inner walls.

“You certainly are very wet, Katherine.” He added a second finger, then a third, while he rubbed her clit and his cock a bit faster. She twisted her hips, pushing against his hand, wanting him deep inside.

“I know I do not have enough fingers to fill you the way you want, Katherine. Even my penis is not enough.”

“I have a better idea,” he said, with an angelic smile. He reached for the bowl of fruit, and selected a ripe mango. He rolled the egg-shaped fruit in one hand, the fingers of his other hand still busy in her cunt. The mango was about the size of his fist. As it lay in his palm, he could not close his fingers around it.

“As you probably know, Thailand is famous for its mangos. They are the sweetest and most succulent in the world.” He removed his hand from her sex. It was gleaming and wet with her juices. “Excuse me for just a moment.”

Kate held her breath, watching as he lubricated the smooth rind of the fruit with the moisture from her cunt. He licked the mango. “Delicious,” he said.

He parted her lower lips with one hand. With the other, he brought the slippery fruit close to her opening. “Relax now, Kate. Relax and enjoy.”

He pressed the mango against her, trying to work it into her vagina. “Think how good it will feel,” he murmured, “once it is inside.” Impossible, thought Kate, but the narrow end was already through the gateway.

If you want more, you'll have to read the book!