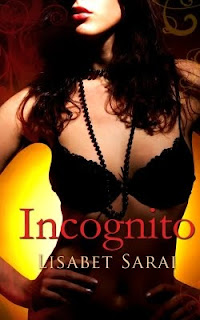 Victoria Blisse has started a movement! Every Sunday, she's posting an excerpt featuring a kiss on her blog, then inviting the rest of us to follow suit. So here, for your reading pleasure, is a three-way kiss taken from my novel Incognito. Enjoy!

Then all her awkwardness and uncertainty dropped away. With her right hand, she reached for Marla, her fingers seeking the hard little nubs pushing through the elastic material. With her left, she drew Marcus to her, reveling in the sensation of his tumescence pressed against her thigh. Marla’s breast cupped in one hand, Marcus’ scrotum in the other, Miranda kissed them in turn.

Marla was slender, but far from boyish. Miranda could not take her eyes from the dusky rose nipples that pertly tipped the girl’s palm-sized breasts. Her skin was golden all over with a light tan; there were no pale patches. Marla’s hips swelled invitingly from a narrow waist, then down to firm, straight thighs. At their meeting point, her neatly trimmed triangle of brunette curls left Miranda feeling weak and confused.

I’ve never been attracted to women before, thought Miranda. What’s happening to me? Then an image from her past flooded her inner vision. High school, Rebecca – the minister’s wild daughter, long blonde locks flying, laughing as she danced at a party, while a younger Miranda watched from a corner, overwhelmed by a craving she could not name. So, thought Miranda, beginning to understand how little she knew her real self.

Posted by Lisabet Sarai at 8:08 AM

Thanks for joining in the snogging fun!

Looking forward to being your guest later this month.