Cover for Wild About That Thing

Greetings! Just popping in to share my latest cover from Total-E-Bound. 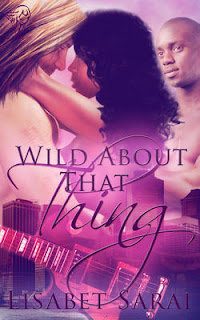 Wild About That Thing is a M/F/M ménage story set in a New York City blues club. Two things are important to Ruby Jones: her teenage son and her struggling club, the Crossroads Blues Bar. Her love life comes as a distant third, despite the efforts of Zeke Chambers to convince her otherwise. Zeke's the lead singer in her house band, a devoted friend, and an occasional lover. He can drive her wild with desire, but can't get her to make a commitment. Deserted by her cheating ex-husband, Ruby's determined she's going to make it on her own. She's hot-blooded like her bluesman daddy, happy to satisfy her physical cravings, but she's not about to let any man into her heart.

Wild About That Thing will be released as part of the Treble anthology in September, and as a stand-alone title soon after. Want an excerpt? Just click here!

Email ThisBlogThis!Share to TwitterShare to FacebookShare to Pinterest
Labels: cover, menage, Treble, Wild About That Thing