Even before I wrote erotica, I had always been inspired by music.

Music has passion. Music can express complex emotions in a way that words sometimes struggle to replicate. I have hardly ever cried while reading a book, but show me Adele’s live performance of “Someone Like You” and I’m a mess.

More often than not, I will name stories after songs, or possibly lyrics, if one particular song happened to fit the writing perfectly. In the case of “The Hand He Dealt”, I originally christened it “Shiver” while listening to a Natalie Imbruglia track, but soon realised it didn’t suit the plot that was developing, and never managed to find another song that fit.

But music shaped the story.

The three primary characters each had their own theme tune. Astra, the party girl who I describe early on as walking to an inaudible beat, always entered to Ke$ha’s “Tik Tok”. Self-centred Ash had two: when he first appeared it was to Calvin Harris’ “The Girls”, while later on it became David Guetta’s “Sexy Bitch”, the chorus of which seemed to suit Ash’s inarticulate jock persona nicely.

And Harry, bless him, had “With or Without You”.

Music also brings emotion to scenes when played in the background. In the case of erotica, it invokes desire and lets us show how we intend the scene to feel – is it fun? Exciting? Romantic? Dangerous?

I have two sex scenes scored with music. One involves Astra dancing with Ash at a party to “Chain Reaction” – I’ll leave the mechanics of that one to your imaginations. The second, my very first ménage scene, is set to Basement Jaxx’s “Get Me Off”. There’s a certain savagery to the bassline on that track that I think works well with that scene – I can see my two heroines stalking their prey and reducing him to jelly at a touch. Plus, of course, with a title like that it was just crying out to be used for a sex scene.

Does anyone else do this? Am I alone in giving my novels a personal soundtrack?

Here's a bit more about my new release, available now from Total-E-Bound.

Nobody can beat Astra Scott in playing the hand she’s dealt. 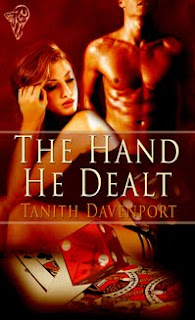 Astra Scott likes to live life to the full. A sorority girl and Gaming Management student, she spends her days studying and practising guitar, and her nights partying or working at the Fountain Casino, where she has an internship as part of her final semester. The only blot on her landscape is Ash Drake, her best friend Sasha’s boyfriend. Arrogant, physical and blond, Ash has never forgiven Astra for her rejection months earlier and enjoys annoying her at every turn.

But when Astra’s boyfriend Harry reveals a shocking secret, Astra responds in the only way she can think of: by finding a way to take on a more attractive, masculine role in the relationship. Her experimentation with sex toys finds a surprising outlet in Sasha, but when Ash discovers their secret and wants to get involved, Astra finds herself torn between dislike and desire…and as their undercover relationship grows, Astra finds herself falling in love, a path she feels can only end in heartbreak. For Ash may be the only man whose own fantasies are a match for hers, but can she knowingly steal his affections from her best friend?

Yes, I know quite a lot of authors who have soundtracks for their books. I've also heard of authors who have "scents" as well. They choose a mix of essential oils based on their characters. Me, well I used the very cliche Ravel's Bolero to help me write my first ever sex scene...LOL...but now I find that music distracts me just a little too much. I keep singing the lyrics or humming along!

Congrats again on your release :-)

And have fun on the rest of your blog tour!

Welcome to Beyond Romance, Tanith, and congratulations on the release!

I don't have "sound tracks" exactly, but I do often use songs in my tales. This is especially true because I seem to write quite a few dancing scenes. In RAW SILK, for instance, Kate's master requires her to impersonate a Thai go-go dancer, and she gyrates to the totally appropriate "Under My Thumb" (the Rolling Stones). In EXPOSURE my main character is an exotic dancer who does a routine to Chris Isaak's "Wicked Game" (one of my all time favorite songs). And I do have a story in the upcoming TEB "Treble" anthology, about a woman who runs a blues bar. That tale includes a number of my favorite blues tunes as well as some classics.

Wishing you lots of luck with the book - and the virtual tour!

I've never tried using scents - I'll have to look into that. Might give my current WIP a kick up the arse, especially since so far I've not been able to indulge myself with a dance scene!

Thanks for having me here, Lisabet!

What a great post! I love music and am always interested in reading about an author's soundtrack for a book :-)