Today I'm celebrating TEB's release of my science fiction ménage Bodies of Light as a standalone novella. Yes, I know the story only came out in anthology form a few weeks ago. I'm as surprised as you at the fast separate release. Guess Total-E-Bound knows a great tale when they read it... ;^)

Anyway, what better way to celebrate a release than to give away a copy of the book? I'm guest blogging at Amy Valenti's today (http://amyvalenti.wordpress.com/) as well as here. Leave a comment at either blog to be entered in the drawing. Leave a comment at both and you'll have two chances to win. I'll select a winner on Wednesday June 1st.

So what is Bodies of Light about? Well, physics. Frustration. Interstellar travel. And of course, lust and love.

My heroine, Dr. Christine Clarkson, has spent her whole career trying to work out the secret of faster-than-light travel. You know what I mean - trying to build a "warp drive" that will let humans travel to far distant planets.... Every science fiction author knows that it must be possible, and Christine believes that too, but she's had no success. Meanwhile, humans are crowded together on a depleted, polluted planet - travel to the distant stars may be their last chance to survive as a species.

As a sort of penance for her failure, Christine signs up as crew on the Archimedes, a sub-light speed mission to colonize a planet in one of the closest star systems. Without warp travel, the flight will take more than a dozen years. Christine and her crewmates must spend most of the trip in suspended animation. As the story opens, she awakens unexpectedly from stasis to discover that the rest of the crew are dead and the Archimedes is wildly off course.

There she is, alone in deep space - then all at once she has company, a pair of handsome and extremely virile men who somehow simply appear on the ship. At first she thinks they're a figment of her imagination, a product of stress or sexual frustration. Alyn and Zed work hard to convince her that she's wrong... 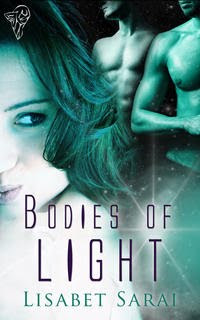 “Christine.” The voice rang like crystal and flowed like water, a far cry from the flat, synthetic tones of the Archimedes. “Do not despair, lovely one.”

Christine could not help smiling at the endearment. No one had called her lovely for a very long time. She kept her eyes closed, willing the dream to continue.

“We are with you, Christine.” Deeper, richer, edged with laughter, another voice chimed in. “You are not alone.” A cool, soothing palm cupped her brow. Strong hands settled on her shoulders, drawing her upright, then slipped down to cradle her breasts. Luscious heat suffused her, focused on her suddenly-taut nipples. They were smouldering embers ready to burst into flame. Soft lips brushed her neck just below the hairline, sending shivers spiralling through her. Someone unknotted her hair and let the weight of it cascade freely down her back. She sighed as careful fingers eased out the tangles. Each gentle tug at her scalp was pure pleasure.

The caresses ceased for an instant while her chair swung away from the control panel. Then the sensations began again, delicious and irresistible—unseen hands kneading her breasts, a warm mouth nuzzling her earlobe, a teasing tickle tracing its way down her belly, firm pressure parting her thighs and the barest graze of a fingertip across her pubis. A fierce stab of delight ripped away her languid mood. She moaned, arching up towards the retreating finger. Laughter poured over her like dark honey.

“You like that, sweet?” asked the baritone. The finger returned, pressing into her nylon-covered cleft and sliding back and forth along her length.

Christine gasped. “Oh, yes…” Swirls of fluorescent colour danced on her closed eyelids. Familiar scents teased her nostrils, earth after a rain and new-mown grass. The finger moved faster. The soaked fabric of her coveralls slithered across her sensitised flesh. A climax gathered in her depths, heavy and full as summer thunderheads. “More,” she whispered, just as someone dragged the zip of her garment down below her waist. “More!” she yelled, as sharp teeth fastened on her bared nipple and hard digits plunged into her naked cunt.

Dozens of hands fluttered over her skin, strummed in her pussy, plucked at her swollen breasts. The ripe clouds burst. A torrent of pleasure flooded her senses. Her body dissolved. There was nothing left but pure ecstasy, vibrating through her being like celestial music.

“Open your eyes.” The higher voice, the one that shimmered like liquid starlight, spoke close to her ear. The suggestion filtered through her post-orgasmic haze. This dream is certainly tenacious, she thought, her limbs still tingling. Usually I wake up after I come.

“We’re here with you now,” added the earthy voice, from the other side. “Look upon us.”

Why should she resist? It was just a dream. Her eyelids felt leaden but she forced them apart.

A stranger stood to her right. He had marble-pale skin and hair like spun silver. Smoke-coloured brows shaded his piercing violet eyes. A pert nose and full lips gave him an androgynous look, but his lithe body was undeniably male—especially the column of rigid flesh that jutted from his groin.

Arousal flickered through Christine’s body, faint echoes of her recent climax. “Who are you?” she queried, her mouth watering at the sight of his sturdy erection. “What are you doing here?”

“I’m Alyn,” the young man answered with a smile that stole Christine’s breath. His skin gleamed in the dim light of the bridge as though dusted with stars. Fat pink nipples winked at her from his smoothly muscled chest. She ached to touch them. As though he read her thoughts, he reached for her hand and drew it to his breast. “I’m here for you, Christine. To cherish and to comfort you.”

His skin was silk under her palm. She moulded the shape of his pectoral and flicked at the taut nub at its centre. His cock surged in response. A drop of clear moisture gathered at the tip. She wet her lips, suddenly hungry. “Alyn,” she repeated, rolling the name on her tongue.

“And I’m Zed,” came the deeper voice, from her left. She turned to gaze at the second man, taller and stockier than Alyn but equally beautiful. Zed had jet hair and ebony eyes. With his prominent cheekbones, broad mouth and bronzed complexion, he made Christine think of some ancient tribal warrior. A provocative grin lit his face. He seized her other hand and curled her fingers around his swollen cock. “This is for you, little one.”

Blood pulsed through his shaft. Her small hand could barely encompass his girth. She squeezed and felt him harden further. He thrust into her palm, satin-sheathed stone. Her pussy ached to feel him driving into her depths. Alyn knelt before her and removed her sandals, then pulled her to her feet. “We’ve been waiting for you to awaken.”

Ready for some lust in space? Get yourself a copy of Bodies of Light. Or start by leaving a comment - you might win one!

TEB knew what they were doing. Congrats!

Niiiice excerpt! Congrats on it being released as a standalone!

Wow that is an hot read. Be putting this one on my to read list!

I'm more than ready for lust in space with that excerpt. Bodies of Light sounds good.

I've been looking for a sci-fi read and this one's hot!

Love the cover and excerpt.
Wow, what a concept. I love that imagery especially.
I hope your having a great memorial Weekend, and thank you for the chance to win your book :)

This is going on my to buy list for sure. It sounds like this will be a very hot read.

Thanks for your comments! I do hope that some of you will buy the book ;^)

I'm going to leave wait another 24 hours before drawing a winner, so tell your friends!

Oh, what a great excerpt. I've added Bodies of Light to my must have list.

Congrats on another successful release.

What a great teaser this is! Seems to me that it's harder to write a good one for sci-fi than for any other kind of fiction, but you've done a great one here; it shouts at me, "Jump right in, "weather" you believe in us or not!"
mary lou

THIS CONTEST IS NOW CLOSED. Thanks to all of you for your comments!

The lucky winner was MIRANDA (who commented on Amy's blog but not here...)