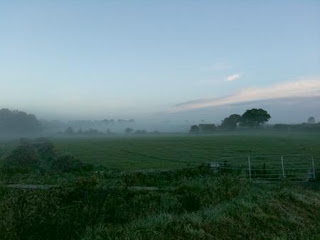 I’ve been in love with Ireland ever since I was a child. I watched Darby O’Gill and the Little People so many times I could say the lines before the characters would say them. Even though I would have nightmares after watching it (I was afraid of the banshee), I’d beg and beg my mother to let me watch the movie again. I wanted to see Darby trick King Brian but most of all I wanted to watch Katie fall in love with her Irishman again. Sean Connery *googly eyes*

So when my husband and I were presented the opportunity to move oversees to Ireland, we didn’t even have to think about it. Regardless of the fact that we had just replaced the roof on our house or that we didn’t know anyone on that side of the world, we packed up and were on the first plane.

I found the country just as magical as an adult as I did first watching Darby O’Gill. If it weren’t for the constant rain, I think I would’ve spent every available minute scouring the countryside for rainbows and leprechauns, much like Darby.

I was late for work the day I took the picture above—I got so lost in my imagined world. The land is just so enchanting; it’s easy to imagine wily Irishmen tricking leprechauns into giving up their pot of gold or fae princes seducing naïve farm girls.

You can read more about my upcoming release at my website (link: www.gillianarcher.com )

Sneaking down the hallway again, she tried to ignore the rough burlap scraping her bare skin. If this is what they thought humans dressed like…She shook her head. Thank God she was able to steal this “human” costume from the laundress. She’d stick out like a sore thumb with her own black slave robes. Nothing said escaped convict more than a prison uniform.

She paused outside an open doorway. She could do this. She had to do this. Taking a deep breath, she started to dart past when a cacophony of footsteps had her freezing in place. She frantically looked up and down the hall for someplace to hide, but could find none. Not wanting to be caught out in the open, she took a deep breath and ducked into a room.

And stopped in her tracks at the sight that greeted her.

A room easily the size of a football pitch overflowed with “humans” in various states of undress. And all were engaged in some sort of passionate activity. She couldn’t help but gawp at the many gorgeous people having a very good time. A few metres away, a woman lay prone, ardently kissing one man while two others knelt next to her and each suckled at her breasts. Ashley quivered at the scene. To have three men attend to your every sexual urge while everyone in the room watched and grew aroused by the sight… Her nipples tightened.

To her right a man knelt behind a woman as he thrust his large cock inside her. The woman’s cries of satisfaction filled the room. With one mighty surge, the man swept the woman from her crouched position, forcing her back against his sweat-slicked chest. As he held her against his body, he cupped her breasts in his hands and tweaked her nipples with his fingers.

Ashley’s panties grew damp. Oh, God. What she wouldn’t give for a little of that action. Especially with a guy as hot as he. Typical of most fae, he was outrageously handsome. The only noticeable differences between him and any famous New York underwear model were the pointed ears and luminescent skin all fae seemed to possess. His body practically glowed as he fucked his very willing partner.

Oh…my...God. So this was what the festivity was all about? A huge swinger’s party? She never would’ve guessed. No wonder they dressed in itchy burlap sacks with drawstring pants. She was tempted to rip off the prickly clothing and join in the lusty pile of twining bodies. If her hormones had a say, she would be stripping down and getting busy. But she couldn’t. This was probably her only chance to escape. She couldn’t let her libido rule her and let this opportunity slip through her fingers.

With one last, longing look at the writhing bodies, she turned to go.

And smacked right into a very firm chest.

“Your first Beltane festival?” A deep rumbly voice above the hard, firm chest asked her.

Ashley looked up and gasped.

Gillian Archer has always loved books. And has had a serious soft spot for romances ever since the tender age of twelve when she would steal her mother's Harlequin books and read them under her covers with a flashlight. But the writing bug didn't hit her until over ten years later after a dare from the husband. (It might have also involved a wall-bangingly bad book.) Now she can't imagine doing anything else.

Outside of writing, Gillian loves to spend her time snuggling with her husband, playing with her dogs, and travelling to exotic places. After living abroad for four years, she is very eager to return home to the US and the wonders of Walmart.

Welcome to Beyond Romance, and warmest congratulations on the release!

I loved watching Darby O’Gill and the Little People! Was so disappointed when they stopped playing it on TV. Your book sounds like one I would enjoy reading!

Lisabet--Thanks so much for having me!

Lauren--I can't believe you haven't seen the movie. For shame, for shame! LOL I consider it a classic :) And anything with Sean Connery is an instant must-see.

Colleen--Glad to find another Darby lover. And thanks for the lovely compliment!

Ironically, when I was a kid, Sean Connery's character was the one I didn't like in that movie.
But then he became 007 and it was all good.

Hi Gillian! I blush when I think of what you have those faeries doing. When I visit Ireland, I'll be thinking naughty whenever I see that green landscape.

Have fun shining the maypole!

Cari--I have a feeling you don't need much inspiration to think naughty ;)

Amber--Errr, thanks. I think LOL