When is it smart to fear?

My writing partner, Randolph Tower and I are working on a new mystery book, Meltdown. It’s going well. We’d both researched the Russian Mafia for inclusion in the plot. Sounded great, you don’t mess around with these bad boys, and they are popping up in the big cities.

Then I received a phone call from a writing friend that changed everything. It seems her roommate’s son came to live with them. This man has spent much of his life in and out of prisons, mostly white-collar crimes, but along the way he had did some time with members of the Russian Mafia. My friend mentioned us using the Russian Mafia in our plot line, and the man became insistent that she call me and suggest we re-think that part of our plot, that we could be putting ourselves into danger.

At first I thought, that’s silly, it’s fiction and it’s a book. I gave it some more thought. Yes, it’s fiction, but plausible fiction. What if the storyline turned out to be true and we’d stumbled onto it? Would we putting ourselves and our families into danger?

I’ve written or co-written seven published novels. Something like this has never come up. Meltdown and Ice are the first time I’ve ventured into the mystery/suspense genre. The others were science fiction, fantasy, or paranormal genres. Not much threat coming from any of those plots.

I called Randolph and we discussed it. Bottom line we are keeping the basic plot, but removing all mention of the Russian Mafia. Sure, publicity sells books, but money doesn’t do much good if you or someone you love is harmed, or worse, killed.

So what do you think? Are we being too cautious, being silly to think using a plot-line involving some very nasty guys would be a threat to us? Has this happened to you?

There’s a plot for another book; mystery authors’ fictional take on a crime turns out to be true and puts them in danger. But then hasn’t that already been done?

Yes, we are moving ahead with Meltdown, minus the Russian Mafia angle, and it’s a good story, but are we copping out? What are you willing to risk to maybe have a big seller on your hands? Me? Well, I’ve discovered that my safety, and the safety of those I care about, as well as my peace of mind, is priceless. 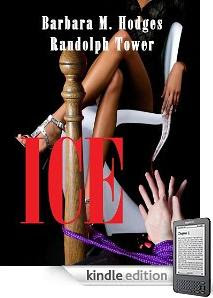 Bio: Barbara M Hodges lives on the central coast of California. She shares her life with her husband Jeff, two basset hounds, Ophelia and Hamlet, as well as with a sassy feline, Wallace.

Barbara is the author or co-author of seven published books. Her latest, Ice, co-authored with Randolph Tower, was released from Books We Love Publishing Partners, in January of 2011.

You can find out more about Barbara and her books at any of the weblinks below.

Ice can be purchased in both print and ebook format.

Below is the link to Ice on Amazon.com:

Good morning Barbara (well, it's morning in GMT-land which means that the sun must be over the yard-arm SOMEWHERE or other!) *pours drink*

I am greatly relieved to discover that I am NOT the only writer to encounter a problem regarding the 'blurred edges' between imagination and reality.

It has been several weeks now, I have quite simply NOT DARED to add any new chapters to one of my current WiPs.

It's a (fictional) cautionary tale about Global Warming, its effects, and a (possible) solution. I started writing it just over a year ago, and one of the first 'Incidents' I "invented" was ... a tidal wave striking Haiti - about a FORTNIGHT before the event occurred.

I then wrote about a volcano erupting in Iceland, Floods & fires in Australia, earthquakes (minor) in the UK and (major ) in New Zealand, and a tsunami taking out a power station in Japan.

I wrote about ALL these things - and in the above SEQUENCE!! - a good TWO MONTHS (average) BEFORE any of them actually happened! My next (planned) disaster zone was going to be fires in California and flooding in the Southern States (while in Europe Spain is rocked by earthquakes)

Can you understand WHY I'm very nervous about continuing to write this novel?
PS If it's any consolation, I HAVE written a "Happy Ever After" ending, NOT a total Apocalypse!!

Welcome to Beyond Romance. I'm basically with you. If I thought that there was a risk, I'd modify my story line to avoid it. You might feel a bit sheepish, but that's a good deal better than being dead.

Ah, yes, that 'What if?' question. Life can indeed be stranger than fiction. And sometimes deadly. Life imitating art. Or the other way around. Especially in the hands of a wonderful writer like Barbara Hodges. Ice was a fantastic read.

I think you are wise to modify! Makes me nervous for you just thinking about it and there are always those moments ...

Thanks for the comments. Meltdown will still be a great book without the Russian Mafia.

Paul, that is really scary. Sounds like your story about writing your story would make for a great paranormal plot, what if you could make things happen by writing about them ahead of time.

Barbara, I've already thought about that as a future project .... :)

I would definitely change the plot. Don't mess with the bad guys.