First, let me say a big thank you to Lisabet for allowing me to play with her blog today! Thanks!

OK, so a little about me, I can’t sleep. Frequently, I find myself up watching TV, reading, cooking, or just sitting outside and staring at the sky in the middle of the night. It’s not that I don’t love my sleep—I do—it’s more that I can’t turn my brain off to go to sleep. Sometimes when I have, ahem, company, sleeping is easier, but I am forever not in the same city as my preferred “company” so I’m left in a quandary. Last night, I decided to take matters into my own hands. ;)

I got in bed and took up my remote control to find something on demand to help put me to bed. I selected movies. Then I selected genres. After paging through the genres, I noticed that the very last one was “Adult.” Now, my friend, I know you know what’s behind door number three on this one, but before I clicked through to view the titles, I pondered the naming convention. Unlikely I was going to find a movie about how Tom got laid off and might lose the house, or how Mary’s burned out from taking care of her elderly mother while her siblings shirk their responsibilities. Nope, I was gonna see Debbie with her double Ds and fishnets getting pounded by four well-endowed yet unattractive fellows on a couch imported from the set of Miami Vice. Fine by me, that couch has its place in the world.

Being an erotica writer, everything I publish fits into the “adult themes” category from a sexual sense, but I make it a point to ensure my characters are three dimensional and that the conflict introduced satisfies the rest of the world of adult themes as well. In my latest release Fan Mail from Cobblestone Press, Tommy and Alicia struggle to find each other again after an all too realistic fight where things were said that could never be taken back. In If You Asked Me To released by Aspen Mountain Press, Shelley must conquer living with a degenerative disease and a childhood fraught with disappointment to accept the love of her flawed but devoted lover Ray.

Excerpt from If You Asked Me To: 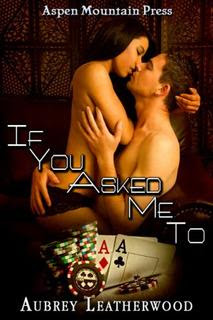 Maybe this was grief not fear…

Shelley put her arms around her knees and rocked. The cell phone in her hand grew hot and moist from how tightly she clutched it. Absentmindedly, she pressed buttons. It lit up then she counted the seconds until the screen grew dim.

Over and over again.

In her mind, she kept seeing her mother’s face. The image varied between narrow-eyed, pursed-lip disapproval and distance built on both natural and chemically-enhanced apathy. She’d never liked Shelley. Not once had her face held a warm smile or even begrudging approval for her daughter. Shelley didn’t kid herself. It was possible it had never held love either.

Then this morning at ten a.m. precisely, Donna Francis died in her favorite blue morning dress sitting in a dingy aluminum lawn chair wedged into broken pavement behind the house. Her silver streaked hair had been perfect as always despite the grimy housecoat covering a wasting body. An unfinished glass of gin tilted in her hand. Even in death, she hadn’t spilled a drop.

Now, Shelley had no one.

Though she had accepted that one day this would come to pass, though she had spent every year since she was fifteen years old working toward this day, Shelley had not been prepared when it came. Insurance was an illusion.

Maybe this was grief and not fear.

Shelley had always known she would be alone one day. Maybe this was grief… not fear.

Maybe this was fear… and not… longing.

Not sure what time it was, not sure of anything more than the darkness hanging like a blanket from the sky and the mosquitoes alighting on her bare arms while fireflies created a distraction, she pressed a button on her phone again. Then another. Then another. She dialed the entire number and at the end her thumb hovered over the send key.

Slowly she shook her head from side to side, her mind answering “no” to the question burning through her gut and her heart.

Her legs shook as they ached, and Shelley released them, letting them slide to the floor. She wondered if she would cry this time, but a familiar dry burn pricked her eyes. No tears.

She should hang up.

He answered the phone like this: “What, Shell?” The words were gruff and crackled across the phone lines like a fire just getting started.

“Hey Raymond.” Normality permeated her voice. Shelley infused it with balance and clean modulation. He would never know that anything was wrong. Of course he wouldn’t.

For so long, when Ray said he loved her, Shelley knew he didn’t. He couldn’t if after all their time together, he still couldn’t read her. He had never been able to tell when her voice or expression lied, which meant he didn’t know her. And if he didn’t know her, then what he loved was nothing more than a daydream.

The thought reminded her of the enormity of this emotion, whatever it was, that had driven her to call him, to put herself through this. Why had she done it? Didn’t she realize he wouldn’t know anything was wrong, that she would have to tell him? And that was something she couldn’t do, had never been able to do.

His fire ignited her own temper. If only he knew, he wouldn’t be so cruel to me. If only he knew… Brash as ever, heated as ever, she attacked. “That’s all you have to say? You haven’t talked to me in all this time and all you can say is, ‘What, Shelley’?”

“Don’t.” Desperation crackled in her voice then softened it. She wasn’t sure if he heard.

Maybe he didn’t. Maybe that’s why he hung up the phone.

Bio: Aubrey is an author that loves language and the way it can be used to communicate the beauty of physical sensation as well as emotional connection. Her characters are always both intensely physical and intensely cerebral beings. Frequently, they possess a certain nuance and realness that endears them to the reader.

Aubrey lives in Florida where she spends time with family and friends and, of course, writes.

Find her on the web at www.aubreyleatherwood.com.

Posted by Lisabet Sarai at 2:27 AM

Email ThisBlogThis!Share to TwitterShare to FacebookShare to Pinterest
Labels: adult stories, Aubrey Leatherwood, Fan Mail, If You Asked Me

Welcome to Beyond Romance! I resonate with your definition of "adult". So many characters in romance seem to live in perfect fantasy worlds. Their relationships are so unrealistic that I can't identify. It sounds like your characters are different.

I appreciate erotica writers who create characters that are 'whole'. I want more than just the sex, I want it all.

Excellent! I could feel the intensity and the emotion. When you create "real" characters who connect with each other and the reader, it makes the sex that much better.

Thank you all! I'm glad that we connect on what we want out of our saucy stories. I want it all, too! Too feel something for the characters enhances the experience of their sexual connection.

Flawed characters keep me in a story. Their flaws are part of their personal journey, and when the story is well written, I want to make that journey with them.
Great post!

Thanks, DA! I like the phrase "personal journey". All stories need that.

I enjoy stories where the characters have pasts and need to work together to make their relationships work. I've outgrown my need for perfect characters and perfect relationships. that was good for my 20's but I've gotten older and learned that life gives you lessons that make you a deeper person and make you realize the superficiality plain that some live on isn't interesting or desired.