When speaking or writing about a supporting cast of characters, movies usually come to mind. Starting in the 1920’s first British and later American film makers recognized the importance of them. Interestingly writers used the tool practically from the first novel written. Robinson Crusoe had his man “Friday”. Don Quixote had his squire Sancho.

This type of supporting character complements one or more main story figures, either by contrast or through some form of supplementation. The relationship is designed to enhance both personalities and make them come alive.

A good example is the character of Linda in “My Life as a Dog”. She is private investigator and shape shifter Drake Martin’s secretary. I used her insouciant competence to showcase his frequent inattention to detail. She is the classic “I am woman; I am strong” female who balances work and family keeping both on course, while complaining of being under appreciated by all.

On the other hand nothing beats a good villain. Where would Superman be without Lex Luthor, or Batman without The Joker? The character of Cynthia in “Subspecies” provides a sometimes humorous, sometimes guileless, high energy teenage foil to Sam’s cool adult behavior, with insights only the young can come up with. The contrast between her persona and that of the main characters, Sam and Jim, more clearly defines all three of them. She’s the kind of character you can both laugh and marvel at. Without her the personalities of hero and heroine would be watered down.

You build a supporting character using the same methods as any other. Plan them out. They should have unique and believable attributes. In “My Life as a Dog” I contrasted Linda’s teased hair, East Texas speech, and general confident sassiness against Drake’s more laid back deeper thinking persona. That she doesn’t know about his shape shifting ability keeps tension in the interactions between them.

The character of Jethro from “Subspecies”, on the other hand, is what Mark Twain called “flourishing villainy”, that most despised of all creatures by humankind. Holding sway until the very end he keeps the hero and heroine on their toes, without respite.

So, build the supporting cast with the same care you take with the lead roles and the work, whatever the genre, will benefit.

My employer, Cynthia Meadows, recently emerged lycan who exploded into the world of high fashion modeling with the force of an Atom bomb, wishes to announce the birth of “Subspecies”. The healthy novel of 73,000 words came into the world on May 6, 2011 at 12:01 AM. Ms. Meadows, whose professional name is “The Fashion Model Known as Cynthia”, will sponsor a series of promotions to be held throughout the web in honor of Samantha “Sam” Johnson, lycan mate of Doctor Jim White, himself a vampire and professor of mathematics. In addition to this imaginative site, the promotions continue at http://museithot.blogspot.com/2011/02/subspecies-samantha-johnson.html continuing on http://linsownfirebrand.blogspot.com/2011/03/lj-holmes-presents-subspecies.html and http://www.tony-paul.com/ .

The purpose is to celebrate the book’s release as well as the imminent arrival of The Subspecies' First Children, a litter of three, two females and a male. Due to Ms. Meadow's recent fortunate change in circumstances, the event has been relocated from Doctor White's apartment to the Grand Ballroom of the Charles Weston, the crown jewel of hotels in this university town. The event is monumental for all subspecies. As the first lycan/vampire couple, Sam and Jim have discovered the key to reproducing our kind.

All subspecies as well as their human familiars are invited. 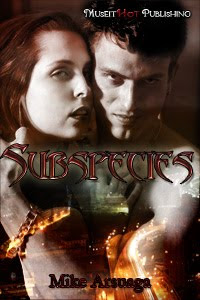 With Samantha “Sam” Johnson, Dr. Jim White, a 130-year-old Vampire, has the best sex of his life and it’s a shame she had to be his next victim. But she had a surprise for him. As a Lycan, she hunted him as he hunted her. After discovering each other’s secret, they cannot resist the physical attraction. Together they hunt and reach out to others of their kind using technology to form a support group. Sam and Jim become the first Lycan/Vampire pair bond.

As a mathematics professor and man of science, Dr. Jim rejects the ways and lore of old in favor of modern solutions that, if not acceptable to humans, allow Lycans and Vampires, The Subspecies, to live invisibly, because discovery is their worst fear.

The Subspecies are a mutation within the human genome. No more than 700 have been alive at one time. They cannot breed with humans or within their own group, but an unexpected event rocks the world of subspecies, opening a universe of possibilities with the promise of their lives being more than hunting, living in shadows, and fruitless mating.

A rain soaked, bedraggled, and hysterical Cynthia appears at Sam and Jim’s front door. Sam, a lycan like her, recognizes the early stages of emergence. The female lycans begin the ritual, excluding Jim. When he returns to the scene, Cynthia is a seven foot tall lycan, gradually resuming human form.

“What is this?” I asked in awe. Lying on the floor, a sexually mature Cynthia, totally unmindful of her nakedness, gazed at me tiredly.

“What’s up Doctor Jim?” she murmured.

The sickly, pale skin changed dramatically. A rich and vibrant white, like marble or porcelain, replaced the dullness, the difference between pasty-skinned zombies from a low budget horror movie and Snow White. Her eyes and hair showed a new depth and shine. The once skeletal face filled out, still lean but not malnourished. The flesh still tautly covered handsome bone structure but with a new vitality and substance. Breasts rose from her formerly featureless ribcage, adhering to the saying more than a handful is a waste. Each presented a firm delta topped by a hard dark nipple, like a black cherry on a scoop of vanilla ice cream. A curve of hip projected from the waist. Her long legs filled out and acquired shape. A vivid black pubic triangle filled the space where her thighs joined. From it emanated the rich scent of her new sexuality. How did I not notice the difference between a female lycan’s scent and a human’s? I wondered.

A touch of color brightened Cynthia’s cheeks. “Doctor Jim, I had no idea!” she said dreamily with a flirt in her tone as she assessed me with lycan senses. “I think you’re hot, too.”

Greetings, Mike! Welcome to Beyond Romance.

I love your "birth announcement". I wish you lots of luck with the book.