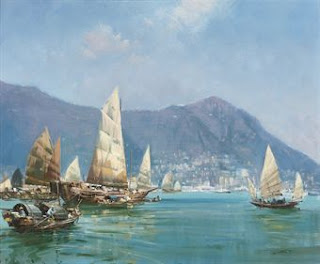 When I heard that D.L. King was putting together a steam punk anthology, I knew that I'd have to submit something. Never mind that I had a bunch of other deadlines. Forget about the fact that I'd never written steam punk before. Every anthology she's edited has been exceptional. I just had to be part of this one.

When I started turning over story ideas, though, I found myself floundering. I understood the signature elements of steam punk: complex, elegant gadgets fashioned of brass, leather, or crystal; eccentric scientists, secret societies, extravagant intrigues and evil schemes; layer upon layer of constraining garments; lasciviousness hiding behind the facade of propriety. I just couldn't get a handle on a premise that felt exciting and original enough to pursue.

As often happens in my writing, I turned to the question of setting to unlock the doors of my imagination. Steam punk borrows heavily from Victorian or Edwardian history, technology and aesthetics. Thus it is often set in England. As an alternative, I considered using Victorian San Francisco as my background - the Great Fire might have figured in the climax - but America seemed too much of a frontier, insufficiently subtle for the type of story I wanted to write.

Then I remembered that Victoria's empire stretched far beyond the British Isles. What about a steam punk tale set in Hong Kong? Even now you can see remnants of the imperial period in the city's architecture. All I had to do was shut my eyes and I could imagine what Hong Kong might have been like a hundred and fifty years ago: hot, damp, crowded and smelly; a colonial society full of power struggles and hidden scandals.

That notion opened the creative floodgates. My characters practically stepped out and introduced themselves (though even I was surprised by who they really turned out to be). The plot unrolled as I wrote. My whole story came to me, inspired by Asia.

I hope you enjoy reading it as much as I enjoyed discovering it.

Her Own Devices by Lisabet Sarai 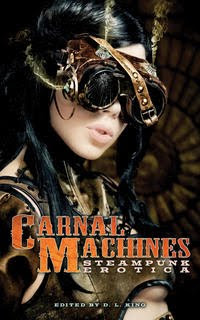 Lin Xiao Chung, lovely slave of Hong Kong whoremaster Fang Wu, pays a midnight visit to the infamous Christopher Burton, legendary entrepreneur, explorer, inventor and rake. Since fleeing England in disgrace, Burton has set himself up in the brothel business, using his engineering genius to create sex machines that threaten Fang Fu's financial empire. Lin's mission is to thwart Burton - any way she can. But Christopher Burton has more than one trick up his sleeve and Lin soon finds that the foreign devil has salacious secrets she never expected.

Lin sat silent, twisting her hands in her lap. Burton wondered what Wu would do to her, if she failed in her mission. "Show me," she said, finally. "Show me your machines."

"Would you like a demonstration? That can be arranged."

"Not - not now," she answered coolly. Her poise was remarkable. "I merely want to be able to explain to my master why your house is so popular. Surely you must have models on the premises."

"I can do better than exhibit models, my dear. I can show you the devices in action."

Burton rose and drew open the curtains that draped the south wall. Lin's gasp was more than sufficient reward for revealing a few secrets.

"What - how?" The comely visitor stepped closer to the wall, staring at the round panels of glass embedded in the surface, rather like the port-holes on a steamship. Each port displayed some lascivious scene.

In one window, a cloud of feathers pulsed around several naked forms writhing on a divan. With each thrust, the downy plumes caressed and tickled the bare skin of the two - or was it three? - participants. The feathers seemed alive, their motions triggered by cunning sensors in the divan itself.

Another port displayed a lean mandarin, wearing only the hat that signified his office. A nude woman knelt at his feet. Each time she bent her head to swallow the man's erection, a machine behind him lashed him with leather thongs, raining fierce blows down on his shoulders and back. His mouth twisted in a grimace that could have signified pain or pleasure.

"She controls the beating by squeezing her thighs together," Burton murmured in Lin's ear. "Pneumatics. Works nicely during copulation as well." The girl's breath came faster. Clearly Burton's creations had an arousing effect even at a distance.

In a window in the center rank, a delicate Chinese woman was bound naked on a wrought iron frame. Beside her, a corpulent, bewhiskered Englishman ran his hands over a keyboard. As he played, phallus-shaped rods plunged into or emerged from the prisoner's mouth, quim, and bum, apparently in time to some unheard music. Pincers on jointed arms plucked at the girl's nipples and little animated needles pricked the swell of her breasts.

"There's a plug up the Major's arse, too," Burton commented. "And a sleeve on his cock. He's always fancied himself a musician..."

"How is this possible?" Lin tore her gaze away from the silent tableaux of lust to confront their creator. "The House of the White Tiger is two miles from here."

Burton shrugged. "Lenses. Mirrors. Conduits lined with glass." Her musky scent wafted up from under her skirts and petticoats. She must be extremely aroused. "I've installed some ports in the house itself, of course. As you might expect, many of my clients enjoy watching the games being played in other chambers."

Lin's eyes blazed with green fire. "This is outrageous! Obscene!"

"I take that as a compliment, Miss Lin." Burton grinned. What a savory morsel she was!

"I must have these things. My master must have them." Her earnestness only made her more desirable. "If money does not sway you, then I offer you my person. You are known to be a lustful man, highly susceptible to the charms of female flesh. You may perpetrate any sort of carnal act that pleases you upon my body. I will not resist."

You can win a copy of Carnal Machines. Just comment on this post and I'll enter you in a drawing, to take place on May 15th!

Email ThisBlogThis!Share to TwitterShare to FacebookShare to Pinterest
Labels: Carnal Machines, Her Own Devices, steam punk

I really haven't read much steampunk, but it seems to be coming a really popular genre. I've read a couple really good reviews of this anthology online, so I'd be interested in giving it a read.

I'm just getting acquainted with this genre, though I have to say I've always found this kind of thing fascinating, without knowing it had a specific name.

I thoroughly enjoyed reading "Her Own Devices" - I found the story atmospheric, witty and deeply sensual. Well done!

Your reasons for holding back are very much like mine. I've yet to tackle steampunk, but I adore the concept. This book sounds fascinating! Congratulations and well done!

I really haven't read much steampunk, but it seems to be coming a really popular genre.

I have two steampunk books waiting for me to read them... have not gotten into this genre yet... sounds very interesting!

Thanks for the drawing:)

Ooooh I loved the excerpt and am so intrigued. I've only recently began reading the steampunk genre but I'm loving it. It's so refreshing to have something new brought to historical romances and I think the inventions that could have been created during what would have been the steampunk era are captivating.

As to the American frontier, the Will Smith version of Wild West and the TV series The Adventures of Brisco County featured steampunk excellently, even though I didn't realize it was steampunk at the time. I had no idea until it was featured on the TV show Castle this past season. Yes. I blame Nathaniel Filion. *grin*

This sounds like an incredible anthology. Loe the cover.
debby236 at gmail dot com

I would never have thought of Asia for steampunk. What a unique location for what is normally set in England and Europe. I can't wait to read Her Own Devices.

It's a great book - and not just because of my story. My husband stole my author's copy!

Hi, I do remember posting a comment but alas... I am new to steampunk and really enjoy it. I can't wait for this one to be out. debby236 at gmail dot com

this looks fabulous! I would love to win

Oh! This looks like an awesome book. Please enter me in the giveaway.
marlenebreakfield(at)yahoo(dot)com

Hello! This sounds wonderful, especially the blend of D/s with the steampunk. Please enter me in! Laura K lkubitz60609@yahoo.com.

Sounds like a great read. Steampunk in Asia! Cool! Thanks for the chance to win.
Tamsyn
tamsyn5@yahoo.com

Blogger has made a mess of my blog content too. I'm getting some really weird hieroglyphs in the tag line thing. Ugh!

Anyhoo, I did comment on this before, but wanted to say hi again and repeat myself. Hell, I don't need blogger to help me with that. LOL Steampunk fascinates me, but I've shied away from attempting it, so far. This one sounds amazing and I love the excerpt you added here. There's got to be a way to move this genre to the 'New World' *G*

I have two steampunk books waiting for me to read... have not read this genre yet, but it sounds really interesting!

Have not read this genre yet, I like the sound of this book. Thanks for the exciting look.

What a great excerpt....some thought went into the different "sexchines" I wonder if hubby stole the book to recreate some of the scenes...*grin* Oh my, a girl can dream cant she...hahahaha

Sounds like a great read with some very original ideas...Please include me in your contest...

Thanks for the tease and the chance at a great prize!

I'm quite interested in the steampunk genre. I loved the excerpt and look forward in reading Carnal Machines.

Great excerpt. I'm sure I'd enjoy reading the rest!

Thanks to everyone for taking the time to comment.

My lucky winner is MINDY! Congratulations!

If you didn't win, stay tuned. You never know when I'm going to announce another impromptu giveaway!