(Before I begin, I'd like to thank Lisabet for this spot on her blog. I've always wanted to be in an anthology with her, and I say that most sincerely as an unabashed fan-girl of her work!)

It never fails. Tell me that f/f romance doesn't sell...and I go write one. Show me a bodyguard story...and I write about a female bodyguard and a male body to guard. Ask me for a science fiction romance (SFR) story for an anthology entitled "Seeing Stars"...and I set the story metres below ice.

I've been talking to a friend recently and he complained to me how he was told "not to rock the boat" at work. And I disagreed completely with the naysayers and told him how I thought he had done the right thing by pointing out a flaw in something his manager was putting together.

It's a bit of an oh-oh moment though, isn't it? I can feel you cringing already. Should my friend have even mentioned anything to his boss? What will the reaction be? Was it a wise or career-limiting move?

And you're right. Sometimes, you'll find yourself thrown on the heap as a result. But other times.... Other times, you'll find that you've stumbled across something precious and valuable, whether it's gratitude from your boss or a story that someone tells you gave them a new perspective on a situation. The contrary stories I wrote may not be bestsellers, but I can gain a small degree of pride in thinking that, at the very least, my contrariness provided me with a new perspective on an established trope. And feelings like that never get old.

The Company appreciates its genetically modified humans...as long as they don't get any smart ideas. 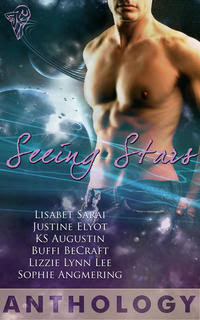 Salvia is a genetically modified human, at home in the oceans of Jupiter's moon, Europa. Intelligent, young, lonely, she demands that the mysterious "company" that employs her send a companion or she'll never work for them again. With no choice, the company creates Rhus, a young brash male. But a relationship that begins with mistrust ends up forging deep links between the pair and they look forward to a happy life together.

Unfortunately, Salvia's tactic of holding the company to ransom was not well received. While they may have introduced Rhus to Europa, the company are mulling over other options. Options that include the very real possibility of death for Salvia. Or Rhus. Or both.

Reader Advisory: This story is best read in a hot-tub! Preferably, with some company.

BIO: Kaz Augustin writes mostly SFR, although she does dabble in fantasy and contemporary romances from time to time. Her latest release will be part of the "Seeing Stars" anthology, out on 9 May from Total-E-Bound. She keeps full first chapters of all her books at her website (www.ksaugustin.com) and blogs at blog.ksaugustin.com A slave to the social media whipmaster, you can also find her on Facebook and Twitter as "ksaugustin". Don't expect much coherence though!

Posted by Lisabet Sarai at 4:05 AM

Welcome to Beyond Romance! I'm in awe of people who write Sci Fi actually. It's much more difficult than contemporary fiction, as I explained in the blog post I wrote for you.

I look forward to reading your story!

And here I thought you were being contentious from a lack of caffeine. :) But I agree, going against the established body of thought is what makes for more interesting stories.

Looking forward to this book!

Ha ha, M! I can take or leave caffeine, tbh. I drink it more often when I have a bad headache as it temporarily alleviates some of the symptoms.

Lisabet, would you believe I find contemps more difficult to write? "Does Street A run north-south or east-west?" "Do they say things like 'Bbbb'?" "What do fashionable/unfashionable people wear in C?" and so on. I have no such problems with my SF settings! LOL