In the process of some promotion, I noted on one website that readers apparently like to know about the writers behind the stories they like. This point remained on my mind as I tried to figure out what information I should include in biographies, which are often required when submitting a manuscript. It all made me wonder how much readers really want to know and why.

I received one answer after getting a complimentary review (that we writers love so much) from a friend after he read my latest Lust Bite with Total-E-Bound, Remote Control. “The only thing is...” he added, making me steel myself for criticism. “...the woman was submissive.” What an anticlimax!

This friend and I have known each other for several years, and he is no prude by any stretch of the imagination, so the question of where his disbelief stemmed from was bound to arise. I could already tell what he was thinking, but I still answered, “so?” just to see how he’d react.

Of course, he expected me to reveal that the story was inspired by a period in my life before he knew me, by a man that he doesn’t know. I could see his cogs whirring. We are close enough to be able to discuss sex, but on a general basis rather than any personal details, so I could see how he could consider an unexpected wild revelation a possibility. However, his puzzled look earned him only a knowing—if not cheeky—smile.

I suppose his reaction is to be expected because he knows me, considers me dominant and, therefore, incapable of writing about a submissive woman. But what of those that don’t know the writer? It must be easier for readers to get an understanding for those writers who stick to one genre than for those that write many.

Maybe it has something to do with the intimate nature of writing about sex and what it takes for a writer to be able to put it into words. I think it sets us apart, somewhat, not least when the Booker Prize judges have complained about not seeing enough sex in the books recently nominated for the prize. Apparently, this is due to their concern about receiving the Bad Sex Award for the sex scenes that they pen. Maybe, they’re also worried about the assumption that one can only write about what they actually experience.

So, did I reveal all to my good friend? Of course not. Just for kicks, I’ll get him to read one of my stories where the heroine is dominant...just to keep him guessing.

Joseph is more than capable of getting into Paula’s head over the phone – she knew he could take complete control if they ever met. 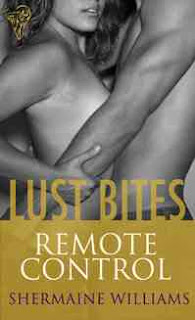 Paula is a whole different woman over the phone – confident, in control, even dominant. Except when it came to Joseph. He was in a class by himself and he knew it. Not only could Joseph control her actions by voice alone, every pleasurable sensation that flowed through her was his to demand.

But Paula would have to find the courage to agree to meet him before he could really own her body—a step that’s against all the rules. If caught, she could lose her only contact with him and what they’ve built...forever.

Welcome to Beyond Romance. Remote Control sounds like an hot read!

Thanks for having me, Lisabet, loved every minute!

I like this post. It's got me thinking how much of 'me' can truly be discerned in my work. In my case, it's there...but can you find it ;)

Great job, Shermaine. And that story sounds real sexy. I'll have to check it out!

Uhm, I wondering if people wonder the same about me when they read my work?

Glad to get your mind working, Bianca. A single act of inspiration can be embellished, then the truth is anyone's guess!


You know they do, Willa! I like to put myslef in the shoes of others and imagine what they see. Really interesting!

It's all nonsense of course. I mean, there ARE many things in my books that are based on my own love affairs and explorations, but usually they're just the jumping off point for a far more entertaining "what if".

Oh...I so wish I could say I was a Londoner...it sounds so intriguing! We're inventors, though, aren't we as writers? I would imagine someone that chooses the genre of erotica is highly sensual and sexual but who knows, really. I find it all intriguing and just attribute it to the skill of the inventive writer...

That's what I'm counting on Word Actress (I feel like preceding your moniker with Lady!) but like anywhere, London has its good and bad points. I agree with you, I suspect many people make instant judgements about erotica writers that they wouldn't about a 'mainstream' writer even though we are all inventing.