What inspired you to write this book?

Well, ever since I was a child I always wanted to be a writer. It was a dream of mine to be published and to write stories that everyone could enjoy. Speculative Sky was created because I’ve always had a fascination with stories about Extra-Terrestrial Life and S.E.T.I. and I wanted to integrate such a story with a female character as a strong and intelligent lead.

Do you have a specific writing style?

Yes I do but I am not sure what to call it. When people read my work I want them to feel as if they are right there in the midst of it all. I want them to be able to hear, taste, smell and see the action as if it is happening all around them. I also tend to write tight stories with quick pacing. It's what I like to read and consequently how I write.

How did you come up with your title? 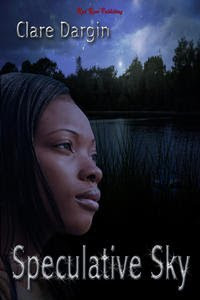 To be honest I’ve always been attracted and fascinated by the abstract and the symbolic. I wanted the title to be symbolic of what April Mullen, the main character, has to deal with as an Astronomer and all that came with her assignment.

What is Speculative Sky about?

It is about a woman who takes a chance and leaves for an assignment on a science colony far away from Earth. As an astronomer it is her job to monitor the stars at night and to record her findings. Nothing more than that. But when she arrives, she notices that her new home is a bit odd, and that though there is evidence of life out there… they don’t want her to either acknowledge it or do anything about it. She of course finds this troubling.

What books have most influenced your life most?

To be honest, in fiction category, it would have to be the old star wars books that came out in the eighties after Return of the Jedi. The expanded universe books taught me more about atmospheric and expanded universe development then any book I know! I read them over and over again and learned about non-human creature development, planetary science fiction and description of space travel and not to mention how to write a cool leading man. I still read them!

If you had to choose, which writer would you consider a mentor?

Douglas Preston and/or Lincoln Child. They write incredibly compelling books which I generally can't put down.

What book are you reading now?

To be honest -- I am almost finished with Book of the Dead with Douglas Preston and Lincoln Child! I'll be going through their back list very soon in order to get caught up.

Are there any new authors that have grasped your interest?

Last night I was thinking about the Friday House, about D. K. Gaston and how it's a compelling story about assassins who have no memory of their being programmed and stuff. I think it's cool. And several books on the military scifi romance front that I have recently heard about. I write in a tiny subgenre so it's nice to see what other authors are doing in it. That way I don't get lonely!

What are your current projects?

Presently I am finishing up the final editing for Ice and Peace, the sequel to Cold Warriors. As well as having another expanded universe book in the works. Not to mention, two futuristic romances that are completely different from my military fiction.

Name one entity that you feel supported you outside of family members.

The Motown Creative Writers Group-- they helped get on the road to being published. And not to mention the many groups in the Romance community. They really pointed me in the right direction. I'm grateful for that.

Do you see writing as a career?

Yes! One day I hope to do it full time.

If you had to do it all over again, would you change anything in your latest book?

Yeah that's why I have to hurry up and get it out of my hands cause I keep changing it!

Do you recall how your interest in writing originated?

When I was a child my father used to encourage it. I would write stories for my family and they would say “Maybe one day you could get this published!” I was like five.... and then when I was in middle school I found out that S. E. Hinton had been published at sixteen-- I became truly determined then.

Is there anything you find particularly challenging in your writing?

Yea, getting through the first draft!

Did you learn anything from writing your book and what was it?

Just get the first draft down on paper and don't be afraid to make stupid mistakes and have dumb lines on paper because it's the first draft and you are allowing the characters to come alive. Later on you can fix and micro manage but don't try to do it the first time through because it will stifle your creativity.

Do you have any advice for other writers?

Don't give up on being published! Try every avenue! There is a way for you!

Where can people find you online?

Lisabet! Thank you for hosting me!

Interesting interview. Do you find that since you spend so much time world building in a sci-fi book that you want to write a sequel to your book so you can use that world again so you don't have to set up new rules for a world? Thanks for sharing.

Sorry to be so late in welcoming you.

I think "She"'s question is really interesting. I can imagine that this might be a reason for doing a series!

Great interveiw! I didn't know you had a blogspot too. I'll check it out. It is so good to see SK getting such good press. Congrats! And good luck with the new stories. Yeah, from one Sci-Fi girl to another, I can truly relate to what you say here.
Kaye

How great for you that your dad encouraged your writing. My parents are my inspiration. They are in their eighties but they read my manuscripts before I send them out. Great editors. Good luck!