We are lucky enough to have an enormous apartment. It's not fancy - the building is nearly fifty years old - but we have as much space as we did in our entire house in the U.S. My best friend says that our living room is big enough to have its own zip code!

Anyway, I usually love the place. But yesterday I discovered at least one disadvantage to having so much room to spread out.

We had an appointment to take our two cats to the vet for feline leukemia vaccinations. On days like this, we try to act normal, following our usual routine until it's time to catch the kitties, put them in the carriers and head for the animal hospital. Unfortunately, cats are pretty bright, and really fast. We managed to get hold of Blackness quite easily, especially for her. (She was originally a feral cat and hates being cornered or even picked up unless she initiates the contact.) We were patting ourselves on the back,figuring it would be easy to get hold of the much larger and more laid back Mr. Toes.

We pulled out our flashlights and looked under every piece of furniture, behind all the air conditioners, in every closet (even though they were all closed - Mr. Toes' extra digits make him an expert at prying doors open). No luck!

If we had a smaller apartment, it would have (I surmise) been easier to find him. As it was, it took us more than half an hour, and we ended up being late for our appointment. We finally discovered him huddled into a dark corner in our office. He managed to shrink himself down to about half his normal size (or at least that was what it looked like) and he was perfectly still.

Anyway, we learned our lesson. Next time, we'll close as many doors as possible before we let on that something's up. Meanwhile, the vet trip is over and both felines are breathing sighs of relief.

I thought I'd share some photos of Mr. Toes. I think they will give you a much better idea of his personality than any description I might provide. 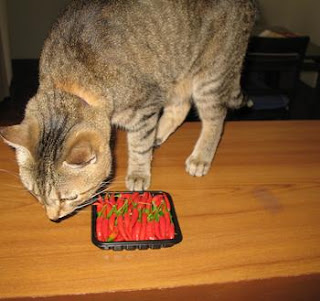 Is this a new kind of cat food? 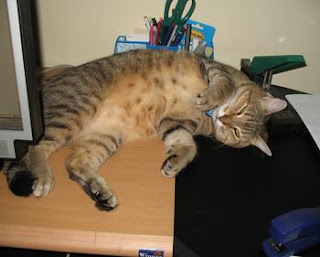 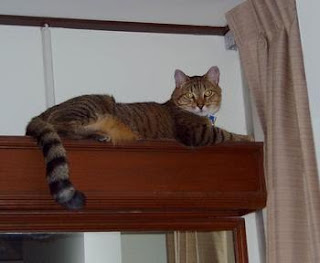 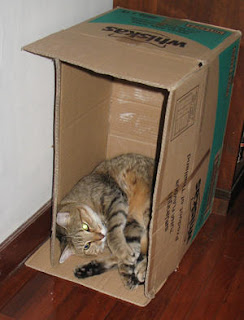 Email ThisBlogThis!Share to TwitterShare to FacebookShare to Pinterest
Labels: cats

Oh, he's beautiful. My cat loved to climb up into the linen closet and sleep behind the towels. A few times I opened the door to a pair of glowing yellow eyes right at eye level. Yes, he kept me on my toes.

Animals know. I cannot understand why they are called "dumb animals". They are smarter than some people I know.

Aw, he's gorgeous. What is a double-pawed cat? We have an albino cat, and he is HUGE, that is a polydactyl cat...he has 6 toes on his front paws....but I have never heard of a double-pawed cat....hmmmm...something new...*grin*

I asked my Vet once how our dog, Sydney, always knew when we were gonna take her to the Vet...and he said that animals can read your body language and the "vibes" you put out and that no matter how you try to act cool they know whats up! hahahahaha Great! now whadda we do..hahahahahaha
Thanks for the fun blog and the great pictures.
jo

I had to laugh as that seemed oh so familiar. My friend has cats and I have helped get them to the vets and unless we are lucky we go through that as well. And even if you have a small flat it doesn't make it any easier. If cats don't want to be found they will find a way to hide. And it's the murphys law of cats that if you have two cats and get one in a basket easily, the other cat will work out what's going on and will refuse to be found easily. :D

OH!!!! I'm absolutely in love with Mr. Toes!!! He's just beautiful Lisabet. Please give him lots of snuggles for me. :)

I have two cats and I adore them. My cat helps me write too...by sitting on the keyboard.:-)

Thanks for dropping by! I know that I can't resist a cat blog (Bron's are particularly good) and I see that some of you can't either!

Joey - by "double-pawed" I mean polydactyl. Extra toes. Mr. Toes has seven toes on one front paw and eight on the other, plus a few extra on his back paws as well. (It's a bit hard to count.) He comes from Massachusetts. Apparently the polydactyl mutation is mostly found in Massachusetts and Halifax - the theory is that some cat on a ship brought the mutation to America.

Hi Lisabet. When I post pix of my three Tonkinese cats on Facebook, I get more comments than I do for my books, my trips, or my recipe blog. People love animals, and your kitty is gorgeous. A good pal too, yes?