Hello and welcome. I am Aithne Jarretta and Lisabet has invited me to share with you some of the paranormal concepts used in writing stories. The elements of magic within the pages of my book come so naturally to me that I must stop and give them extra consideration when asked to write and explain them.

Several years ago I encountered the notion of Twin Flames while reading one of my many esoteric spiritual books. The idea latched onto my spirit and wouldn’t let go. Eventually it came out in a book. ;o)

In the realm of paranormal I used the knowledge and turned it into a legend. Creating legends within a story is so much fun. Here’s the legend as it occurs within my realm of mystical possibilities.

In the beginning there were only beings of magnificent light. Each being had been born from the sacred source which manifested itself in violet flames. When the spirits of these beings were first created they resided within a golden sphere of magical protection. (much like our human womb)

Within their sphere each began to take on the attributes they would carry over when they entered the material world.

Some of the spirit flames remained alone within their tiny sphere. Others…

With a magnificent energetic burst of power others were split during the birthing process. Two spirits emerged from a single flame.

When they descend to our earthly realm they may be so devastated over separation that they lack understanding of their deep longing to connect with another.

This may prove problematic for some resulting in misunderstanding and misdiagnosing their individual problems. (psychological, physical and spiritual distress)

Let’s not forget though that each spirit is here for an earthly purpose. Frequently it will not be rejoined with its twin due to separate life paths.

What happens when they find each other?

There is a joining of such magnitude that it is felt across all energy magickal line into each realm. Their power bonds into a single force which grows when they join together.

Joining on the physical level reconnects them, their hearts and their magic.

When they are a force of good all the world rejoices.

When they are not… Unpenetrable darkness falls.

But as CONCENTRIC CIRCLES goes, the Twin Flames serve the good of all… (Magical Moment™)

“During your fight with Zubird, I saw your magic.” She faced him and moved closer. Hands moving in the air around him, she motioned with flexing fingers. “It’s purple—so beautiful. Like little stars on fire in purple flames. I saw it consume Zubird’s black magic. What was that? I mean—I saw Seamus’ aura of fear when I went to Syther’s lair, but this was different. It’s like everything suddenly became clear to me about us, but even that opens more questions.”

“There is a legend,” Meekal said huskily. “When God created souls, each came from a single sphere of fire…”

Thank you for reading. 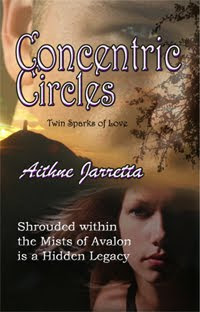 BIO: Aithne Jarretta, born in Akron, Ohio now lives in Florida under sunny skies surrounded by tropical beauty and gentle gulf breezes. She is a mother of two grown sons and a graduate of Walsh University, North Canton, Ohio.

Her first whisperings of a story and being a romance writer came during a college History of England class when studying about Hadrian’s Wall. Much too busy with raising two children and academic studies, she brushed the voices away and completed her college degree.

Eventually she migrated to Florida where she has lived, worked and studied writing since arriving on the sunny shores of the Gulf of Mexico.

Aithne finally listened to the bard’s whispers, sat down to begin writing a story and words tumbled forth. That moment in time changed the direction of her life. Now, a writer for only four years, she has spent time honing her craft.

Romance built around seeds of world history give a unique flare to her paranormal stories. Love and romance binds everything together with endearing energy, weaving them into inspiring folktales. Excerpt where this is taken from ch 8 Death Knell “Kal?” “Humm?” “During your fight with Zubird, I saw your magic.” She faced him and moved closer. Hands moving in the air around him, she motioned with flexing fingers. “It’s purple—so beautiful. Like little stars on fire in purple flames. I saw it consume Zubird’s black magic. What was that? I mean—I saw Seamus’ aura of fear when I went to Syther’s lair, but this was different. It’s like everything suddenly became clear to me about us, but even that opens more questions.” “There is a legend,” Meekal said huskily. “When God created souls, each came from a single sphere of fire. I’m amazed and awed that you saw it in action.” “I’ve never heard that legend. Even with all my reading.” “Aye, well it’s because you’ve been sheltered from magic. That isn’t the main point.” Shayla tickled his pulse point with moist lips. “Humm.” He swallowed and leaned away. “Within each sphere of fire resided two souls in polarity—male and female. They are unique in divine design. No one else matches them.” He hesitated, allowing her loving gaze to study him. “Some stories refer to such souls as twin flames. Unlike soul mates, they truly have a single origin.” “Twin flames?” “Aye. To see my purple flames—well,” he said, looking at her with an expression of tenderness. “It confirms what you said about us being bonded. I knew with certainty in that exact moment when I saw them. That’s why I said I knew everything, but still have questions. I’m not saying it’s going to be easy. But now I understand a bit better and realize this isn’t just some sexual fling on my vacation.” “That’s true. It’s so much more than that,” he said. “Violet energy in the form of flames transmutes dark magic. That’s the only way I could’ve conquered Zubird. Snapping his neck was an action that occurred in the heat of battle. I would have preferred him imprisoned.” Meekal brushed fingertips over a curl escaping down her shoulder, wrapped it around his finger and repositioned it down her breast. “You know, Black Bry and Morna are twin flames. In their case, they bridged the chasm between the human and Fae worlds. “And us?” “I haven’t figured that out yet. Are you ready to go down now? Mum will be wondering how you are. Gail may be here soon, too.”