How I Got My Book Published

This is the story of how I got my book published. A friend sent me an email about a reality show called “Book Millionaire.” You didn’t even have to have a manuscript written—BIG clue—which I totally ignored. All you had to do to qualify was fill out an endless questionnaire and send in a video of yourself explaining why you wanted to be on the program. I wrote a great script (you can judge for yourself on myspace.com/robinglasser—“Robin in 7 Minutes”) and won the first week contestant contest. Competitors were chosen by viewers—having an enormous network of family and friends would definitely be advantageous. There were nine more weeks of judging and then all the winners would begin filming for the show. The prize was to be a million dollar book publishing contract. Another HUGE clue—again ignored. Let’s be realistic here—how many first-time writers would receive such a windfall?

Months barreled by. Emails flew back and forth between contestants and the ‘producer.’ The results: nada, rien, zero, zilch from BM (exactly what the show was turning into). Tired of the waiting game, I decided to take matters into my own capable hands. In the local branch of my library, I plodded through references including the Literary Digest and the Writer’s Handbook, looking for publishers who accepted electronic submissions. I composed a tantalizing query letter declaring that I was the Book Millionaire Reality Show’s first week winner and the publishers should checkout my video on their website. Within ten minutes, I received a reply from a small online publishing house that stated they’d never received such a unique query before and please email them the manuscript. I did and got a contract. HEA, right? Wait. There’s more.

A few weeks before MY LIFE AS A CONCUBINE was to be released, I went down to Miami. A writer friend had rented a table for their huge book fair and invited me to share her space. I had a self-published book of suggestive poetry, MEN AT WORK, plus a zillion postcards printed with the cover of my romantic comedy on the front and blurb, publishing info on the back. Pressing my promo into countless hands, I felt like a politician. My campaign seemed successful—many potential customers professed profound interest.

I returned home and, while wading through a tsunami of emails, saw one from my publisher informing me that they were no longer in business. Talk about devastation! Several margaritas, numerous consolations, and %$#!! outbursts, I took deep yoga breaths and emailed my editor from the defunct publisher, asking if she knew anyone who’d be interested in my book. She put me in touch with one of her publishers and they gave me a new contract. Of course, I was a tad trepidacious about this release. I wasn’t about to have a repeat performance. Basically, I kept my lips sealed—okay, I did tell several, actually more than several, friends but who’s counting?

Yes, MY LIFE AS A CONCUBINE was published as an e-book. It wasn’t until it came out in print and I could hug it to my perky breasts that I finally believed it was real.

The moral of this tale: Believe in yourself. Do NOT give up. When you get in that funky mood, after receiving yet another rejection, reread this story—some do end HEA. 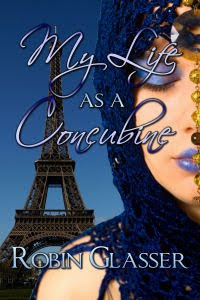 Recovering copywriter, Robin Glasser has written for a variety of magazines ranging from Readers' Digest to Penthouse Letters where she wrote a column called "The Red Hot Woman." Her poetry has been published in Upstairs at Duroc and The Riverside Poetry Review. Ms. Glasser's latest novel, My Life as a Concubine, which is based on her experiences in Paris or as she likes to call it, The City of Merde, is available from www.phaze.com and Amazon Books & Kindle. Robin guarantees that Men at Work, her fully-illustrated book of poetry, will put twinkles in your eyes and sparkles in your pants. Don't forget to watch her fast-paced peepshows based on these poems at http://www.youtube.com/msrobinglasser, Robin now reads at various venues in New York

Email ThisBlogThis!Share to TwitterShare to FacebookShare to Pinterest
Labels: Book Millionaire, Happily Ever After, Robin Glasser

Welcome to Beyond Romance and thanks for sharing your tale. We all see how naive we were, when we look back... but persistence pays!

Good story with a happy ending. I'm glad you got published.