When I first read The Lord of the Rings, in grade school, one of the things that stuck with me was the bit about Frodo's wound. One of the Ringwraiths stabs Frodo in the shoulder early in the story, and because of the cursed nature of the wound, it is said to never truly heal. At the time I only thought of it in literal terms, and was struck by Tolkien's confident use of magic and curses as something his characters had to deal with permanently.

It wasn't until later, after re-reading the series as an adult, as well as some books about Tolkien's life, that I began to see the metaphors in it. Tolkien wrote without a particular political agenda, but the themes of the horrors of war, the loss of farmland to industry, and other issues that parallel his life's experiences are clear enough. And so it struck me that Frodo's wound is something of a unique literary prestidigitation only possible in fantasy. Normally one takes something from real life and makes a metaphor in a story for it. In this case, Tolkien took a metaphorical concept, that of the "wound that could not be healed"--spoken of as the way soldiers who came back from World War I were "scarred for life" psychologically and never able to be happy again--and made it a literal thing in his fantasy book. Frodo bears an actual wound in silence for the rest of his life, and to this day that is still the powerful image that stays with me from the book(s).

So of course I want to emulate the techniques of the masters in my own books. I'm currently in the middle of writing a paranormal fantasy romance series called Magic University. The concept is a bit like Harry Potter for grown-ups. Our main character follows the same literary tradition as Harry, Cinderella, and many others, who discover their magical heritage after being oppressed. This time, it's a college freshman who stumbles on the magical university hidden inside Harvard known as Veritas.

I've got a rather ripe metaphor for the plucking right there. After all, here I have a young person embarking on a grand journey of learning, and also entering adult life for the first time, and so about to learn life's lessons about love, friendship, women, dating, et cetera. But I've made some of it quite literal as the new world that opens up before Kyle's eyes is an actual magical world he hadn't known about before.

Ultimately, being a fantasy series, Magic University tells the tale of a quest. But although the series has its share of magic rings and swords, here we move back from the land of the literal to the land of the metaphor. Because Kyle is not on a literal quest--at least not as far as he knows. Here is where we shift from fantasy to the world of romance. Kyle isn't trying to reach a distant mountain or capture a magic flag. But he definitely is on a search for something that is often described in the real world as "magical," namely, true love. 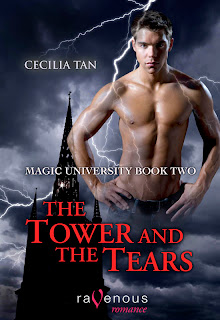 Welcome to Beyond Romance! Sorry I couldn't drop by yesterday.

I've always believed that I had a magical heritage. Seriously. At this point, in the midpoint of my life, I wonder when it's going to reveal itself...