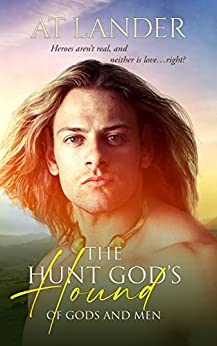 The Hunt God’s Hound by A T Lander

Irish goatherd Conall mac Cormac harbors no illusions about himself or his destiny. He knows what he’s good at – drinking, gambling and blow jobs – and doesn’t waste his time on dreams of a more adventurous or illustrious life. Pretensions to heroism were responsible for his father’s early demise and Conall has no interest in following in his parents’ footsteps. He doesn’t trust love, either, and tells himself he doesn’t need it, as long as he can get plenty of sex. That at least, has never been a problem.

Fate takes no notice of our plans, though. When a demon sorcerer slaughters Conall’s goats, he spares Conall’s life in an instant of cruel humor. Instead, the Fomori monster curses the cynical goatherd into the form of a female wolfhound who, in a caricature of Conall’s lusty nature, is in desperate heat.

It seems Conall is doomed to a miserable life as a dumb beast. Then he encounters Arlen, the Hunter of the Thousand Spears, a lord of the mystical Tuatha de Danann race who inhabited Eire before the coming of men. Arlen is hunting the same demon who’s responsible for Conall’s predicament, seeking vengeance for the murder of his hounds and the theft of a priceless, powerful brooch. He saves Conall’s life, bends the curse so that the goatherd can wear human form at night, and teaches him to use his canine senses to track the demon.

As the hunter and his hound close in on their enemy, they also grow closer to one another. Conall is devoted to his beautiful, brave demi-god master; Arlen cherishes his clever, sensual human companion. In the final, terrible battle against the vicious and wily sorcerer, though, they risk losing everything, including their unlikely love.

After two books based on classical Greek and Roman legends, AT Lander has set the third volume of her Gods and Men series in a totally different mythic realm. I know far less about Irish lore than I do about the beings of Olympus, which made The Hunt God’s Hound feel fresh, original and challenging.

Giving Conall the form of a female hound was a brilliant, gender-bending twist, emphasizing the receptive aspects of his nature. I also found the descriptions of his sensory experience when he’s in his animal form fascinating and vivid.

There’s a good deal less sex in this third volume than in the first or second, but the scene in which Arlen finally claims Conall is exquisitely intense and arousing. An author has to listen to her characters. Arlen is a more somber creature, driven more by duty than the gods in her earlier books, and it felt right that he’d hold back, reining in his desire for the ever-horny Conall. There’s also a dark streak running through the magical hero, a conviction that he’s fated for death. He doesn’t want to inflict that pain on his beloved hound.

That darkness fits with my notions of the Irish temperament and made the book feel all the more authentic.

Conall is the central character in The Hunt God’s Hound. Though the book is quite short (only 120 pages), I had a strong sense of who he was, what he wanted and what he feared. Arlen is not nearly as well-developed; he’s beautiful, compassionate and heroic, but we don’t see enough of his quirks and contradictions for him to feel completely real.

On the other hand, perhaps that was intentional. Perhaps the author was deliberately creating a distance between us and the Tuatha de Danann, who live in a mysterious world only partially intersecting with our own. It might not be possible to understand their nature without crossing over into their twilight realm.

Conall crosses that line, exits the world of men to cleave to a mythical being – and becomes a myth himself.

I loved this book. If you’re looking for a fresh take on MM romance, you’ll probably enjoy it too.

[This book is currently available for pre-order. I received a pre-release ARC from the author.]