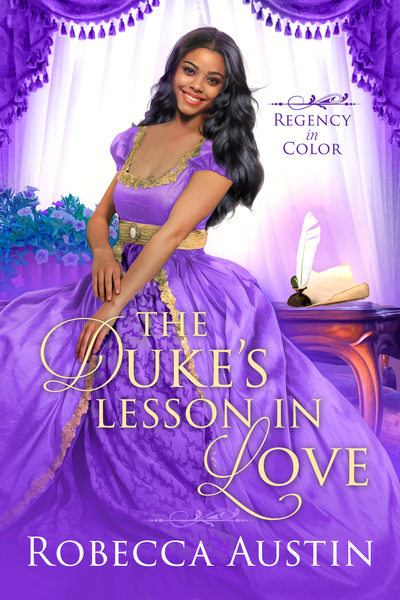 After a disastrous love affair, Lord Gilleasbuig was content living a life outside of London’s spotlight until a series of accidents threatened to leave his estate without an heir. Lucky for him, he had a son he could claim and protect.

After all, how difficult could it be to fetch his estranged son from an orphanage with too many children to care for?

Except, the breathtaking Miss Sadie Fields, who had cared for the child since birth, was a force to be reckoned with. She was furious at Gill for shirking his duties but he was irresistibly drawn to her fire.

Determined to prove himself a good father and win Sadie’s trust, Gill offered her a chance to continue watching over her charge. When she agreed, Gill was eager to return to his boring secluded life, but danger continued to shadow him.

While dodging danger in an unconventional arrangement, a more permanent union risked disappointing his son and losing his last chance at love.

Miss Sadie Meredith Fields gaped at the three women in the room. She hid the pain of her heart shattering. Nothing prepared her for this moment. Not all the times she reminded herself this day would come or the incredulousness of knowing that she, a nanny, born from parents who were once enslaved prior to life in London might freely love a blue-eyed babe she had helped raise from the time he arrived at the orphanage four and a half years ago.

He should have been adopted years ago. He was sweet-natured, but for reasons she couldn’t explain until now, Edwin was not. So she had fallen in love with the little boy who brought joy to her life after the death of her parents. How could she not? Edwin was happy and kind. He was a curious boy who thirst to know more.

Mrs. Headly exchanged a wary glance with her niece Miley before turning back to her. “I know this is shocking, Sadie. But the boy’s father is on his way as we speak.”

Mackenna, the third orphan mother in the room, stood. “We wanted ye to know before the mon arrived.” Her Scottish dialect was heavy even after living in London for the past five years.

Except for Mrs. Headly and Miley, the other orphan mothers had experienced some prejudice due to the circumstances of their race and now did everything in their power to help children of the same faith living adjacent to the Rookery.

Her chest ached as she imagined Edwin’s reaction when he realized he wouldn’t see any of his friends or her again. While this man was Edwin’s father, he was a stranger to the child. “He won’t understand.”

Mrs. Headly cleared her throat. “He will be more accepting if you explain it to him.”

She stiffened. They wanted her to help this stranger—who never bothered to visit Edwin—take him away? Like hell. But even as her fury spiked, she recognized how powerless she was in the matter. “I will not lie to the child.”

“Of course not,” Miley said. “But he will be more receptive if he hears about his father from you.”

She couldn’t simply send Edwin off with this man. Sadie gripped her hips, her nails dug into her flesh through the gray wool day dress even as she admitted how ridiculous barring a Duke from his child was.

The thought of living in a grand house with places to uncover would excite Edwin. If she closed her eyes, she could picture the wonder in his bright eyes. Wonder and excitement she would never see again. Love she would never again experience.

“What do we know about this… this Duke?” She faced the women. “For all we know, he is cruel—”

“And his wife—how do we know she will love Edwin? How many from the nobility do we know that cannot abide their husband’s bastard—”

She had to make them reconsider, at least until they knew more about the man. “I suppose he wants us to identify Edwin. If left to his own devices, can this Duke pick out his child? I think we ought to let him try.” That was a grand idea. Let him chase his tail for an hour. The man was bound to realize caring for a child was not as easy as he thought.

“You think I cannot identify my blood?”

Sadie flinched at the deep, powerful voice that rippled through her ear. Every fiber of her being surged with awareness. Her senses caught fire, and she hadn’t seen the man yet. Sadie cursed her treacherous response to the man’s voice, wanting to hold on to her ire.

This was the man going to take her child, and likely for no other reason than to appease his wife who could not give him heirs. Tilting her chin, she faced him and said, “Can you, Your Grace? Of course not. Not when you have never laid eyes on the—” The rest of her words hung in her throat.

The Duke cocked a challenging brow.

Sadie bit the inside of her cheek as a pair of sky-blue eyes glared at her. Eyes very much like Edwin’s. 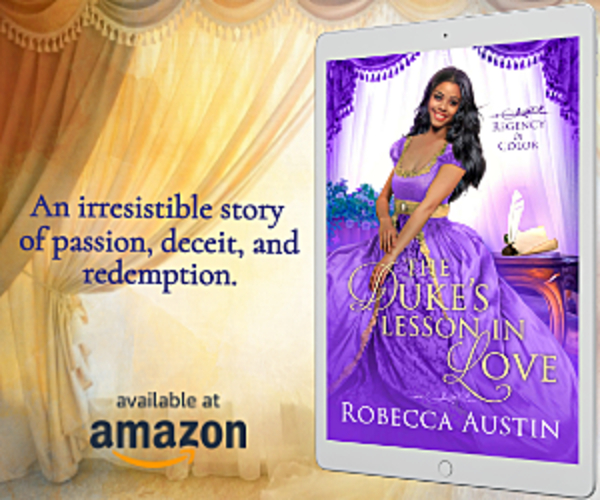 Robecca Austin is the author of happy ever after romance stories. She enjoys crafting tales of sassy heroines and passionate heroes that have a soft center.

You can find her outside enjoying nature and lots of sunshine when there are no bugs. When she's not writing her next novel, she's busy battling Cystic Fibrosis and hugging family. She lives and works in Canada.

Thank you so much for hosting me, Lisabet.