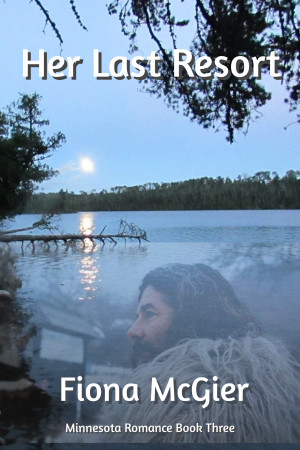 Her Last Resort, the third book in Fiona McGier’s Minnesota Romance series, grabs you from the first paragraph. The author drops you into the middle of a scene in which the heroine, Stella Taylor, is defending herself against a knife-throwing would-be assassin who has sneaked into her suite. The young man attacking her has considerable skill, but he can’t match Stella’s thirty years experience at staying alive. After a career as an agent that cost her more than she’d ever expected – including her marriage and her relationships with her daughter and son – she has officially retired from the CIA. However, instead of the peace and stability she craves, she has become the target of a series of attacks on her life. Someone keeps sending promising young men to kill her – someone who seems to know how to find her even though she changes her location every two weeks.

Stella is wondering about the motive for these attacks and trying to figure out how to stop them, when she gets a call from her daughter, popular movie actress Kelly Ann Sheridan. Kelly invites Stella to come up to northern Minnesota so they can spend a week together at her friend Ivan’s lakeside resort. The remote location seems like a good place to hide. Meanwhile, Stella is eager for the opportunity to spend some time with her older child and perhaps heal the emotional rift between them.

She arrives looking for nothing more than some R&R – canoe trips and hiking, good food, good wine and some unpressured time in her daughter’s company. When she meets the charming, burly Russian proprietor of the resort, however, she realizes her vacation may turn out to include some unexpected pleasures.

Her Last Resort is Stella’s and Ivan’s love story. But romance is a lot different when you’re not a young hottie. Ms. McGier does a fantastic job building the erotic tension, a classic slow burn that makes you ache right along with the two protagonists. When they do finally make love, the scene has all of the author’s signature heat, but acknowledges the fact that men in their mid-fifties aren’t likely to get more than one erection per night, and that women in that age range tend to be dry and tight, no matter how turned on they might be. The sex is no less incendiary for being realistic; both Ivan and Stella have lived lonely and dangerous lives, and they find true comfort in one another. Though they were on opposite sides of the Cold War, their experiences were similar. Both of them have deep scars, both physical and emotional.

The main conflict in this novel lies not within the characters, but in the external environment. With the help of Ivan and his friends, Stella tries to get to the bottom of the attacks. When she discovers the truth, she recognizes how deeply she has been betrayed – and how morally compromised she will always be. Only someone who has done what she’s done – killed more than a few of her fellow humans and sent others to certain death – can understand her. Ivan may be the only person who can help her heal – and vice versa.

I’ve written favorable reviews of both the first and the second Minnesota Romance books, but I think I enjoyed this one even more. The pacing is excellent and the suspense is extremely well done. Furthermore, Ms. McGier does not sugar-coat her characters’ experience. Ivan and Stella both have committed crimes that they have to live with. Love and companionship will help – but the author never suggests love will absolve them of responsibility or totally erase the guilt and the pain.

If you’d rather read about realistic relationships than total romantic fluff, I recommend this book.

Thanks so much, Lisabet. Your reviews are always comprehensive--I know you've read the entire book and can speak to the reading experience. Yes, I was trying to show that love can hit at any age--and be no less incendiary. I was also drawn to the idea that a woman can seek out her child, hoping for at least a friendship, if not the love they both crave from each other. There is one more book in this series that is already published. But I have ideas for one more. Maybe then I'll be done playing around up in Grand Marais. But I've truly enjoyed revisiting one of my favorite places, by writing books set up there.