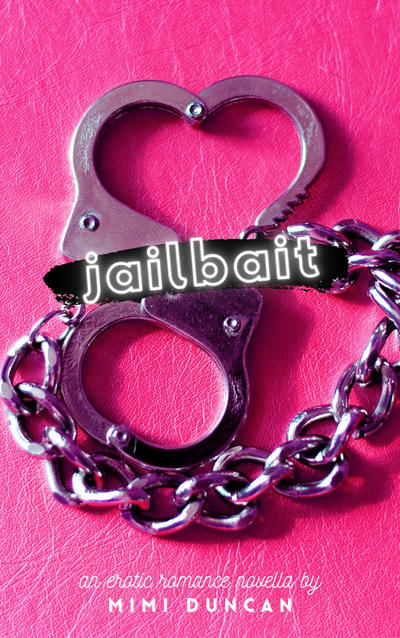 Jailbait started on a bit of a whim. I needed to take a breather from my longer, slow burn contemporary romance, mostly to lay off the mondo pressure I was putting on myself. But because I apparently have no concept of what a “break” actually is, I still wanted to work on something in the meantime.

I’d had the vague concept for Jailbait stuck in my head for awhile, so I thought I’d just sit down and see what happened. A couple hours and 3,000 words later, I thought, “Well. Guess I’m doing this, then.”

The first draft was an absolute trip. Whether it’s fanfiction or original work, I never write the story in chronological order, and I hadn’t written this much this quickly in something like ten years. But — as simplistic as it sounds — the vibes were just right. I was spurred on by feeling; I found all the logistical details along the way.

At first it was just like, “I don’t even know who I am anymore” in this really fantastic way. But by the end of that first day, the drive behind my productivity, and the complete disregard for my usually low self-esteem, totally clicked. Because, truly, I’d been waiting to write this story for so long — I just didn’t quite know how to do it until now.

Much of the book explores Em’s struggle with moving on from an abusive past relationship, and living with PTSD. Though the timeline and some of the events differ, that struggle is largely my own. For years I’d tried to write about it, to take my experience and turn it into something helpful — for myself, for other people — but it was always, ultimately, too much for me to handle.

It took me a long time to realize and accept that I’d been abused. Longer still to accept that it wasn’t my fault, and that the aftermath doesn’t have to dictate my future or what I want out of it. I still struggle with all the repercussions; I’m not sure those will ever go away.

But writing about it — especially writing a romance, something happy and hopeful in spite of all the baggage — helped me to take control of my experiences in this way I hadn’t before. I was able to take all that pain and turn it into something that made me feel good. Even though I can’t change what happened, I’m still in charge of what happens from here.

My past is absolutely reflected in what Em goes through, but there’s also a lot of me in Ryder. Writing his love for Em was a way for me to examine the way I need to love myself: unquestionably, wholeheartedly, with patience, kindness, respect, and as much fun as I can.

Writing and self-publishing Jailbait was cathartic in the purest sense of the word. All the bad stuff was so personal and I didn’t want anyone else touching that, and, this way, I didn’t have to let them. This project is completely, 100% mine. There’s a lot of liberation in that.

We all process our pain, our traumas, differently. We all heal at our own pace. This book was a way for me to unpack what happened to me, and how to move forward. I want to share that with whoever wants to read it, of course. But more than that, I want it to be there for the people who need to rediscover the things that have been taken away; I want you to know that you can always get the good things back.

Whether you’re looking for a smutty good time, or for something to give your own self-love a little kick — personally I’m always looking for both — that’s the niche I want for Jailbait (as well as its TBA sequel, and probably all of my work from here on out).

As always, much love and thanks to everyone who gives it a shot. I hope the story gives you a little something good in return.

It was something she hadn’t felt in a long time, something she told herself she didn’t need, but, man, she’d forgotten how good it can feel.

The only time Em Beaufort wants to revisit her ex-boyfriend is Tuesdays at three, from the relative discomfort of her therapist’s armchair. After four years, that safe space and a successful Zoloft regimen is really all she needs.

What she doesn’t need is a letter from that ex-boyfriend, but it’s hard to resist the allure of paying him a visit in prison. Em expects some sense of catharsis out of it, at least. Instead, she gets a tidal wave of old dramas, but — silver linings, however surprising — a whole new lease on her love life, too.

Can’t say he’s ever been much for love at first sight, but he’s willing to reconsider.

Turns out that getting on the wrong side of old money’s a fast track to a stint in prison. Go figure. But that’s fine by Ryder; his little sister’s shitty boyfriend needed his ass kicked, and he’s happy to do the jail time for it.

And he’s more than happy to pick up another inmate’s ex-girl while he’s at it. An unexpected perk, but one look at her’s got Ryder thinking, hey, ought to be somebody who’s treating her right.

She wants a lot, and he wants to give that to her. All they gotta do is wait for it.

As they find their footing in this unorthodox relationship, both Em and Ryder learn that shouldering your past isn’t such an unshakeable burden. You just have to find someone who’s willing to help you carry it. 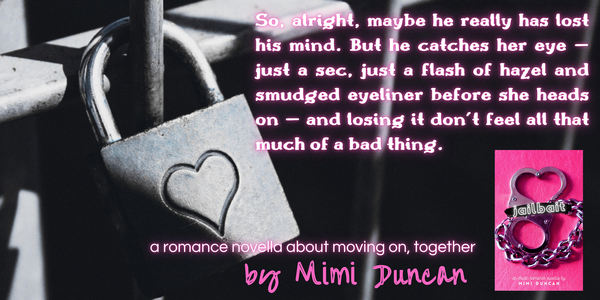 “Please. If that’s an indication of how this game’s gonna go, just take the loss now.”

Ryder gnaws at his toothpick. Can’t exactly light up around here, even if they are outside. Sure the hell could go for one, since Em showed up in those jeans again, and a loose T-shirt with a drooping neckline. There’s a polka-dot barrette clipped to her collar that makes it droop a little more.

If he angled just right, he could see straight down her shirt, past the dangle of those rosary beads, and she might not even notice.

He doesn’t, ‘cause he’s not a fuckin’ animal. But, yeah, he’s thought about it a time or two or ten.

A flash of bright yellow flickers in front of his eyes, when she snaps her painted fingers in his face. “Hey, eyes up, Ainsley.”

Alright, so maybe he is a little bit of a fuckin’ animal, and she definitely notices.

He grins around his toothpick, sucks at the soggy end of it. “Sorry.”

“Sure.” She leans an elbow on the wood table between them, cradles a hand to prop up her chin. There’s a smattering of acne across it, and a beauty mark right at the edge. Ryder’s gotta wonder if she has those anyplace else.

She blinks those pretty hazel eyes at him. Her eyeliner’s smudged at the corners, same as last time, like she slept in it. “Take another guess.”

“Please,” she says again, more emphatically. More sarcastically. “That’s like the same as your first one.”

“Whatever, they’re both wrong, anyway.”

“Alright, shit.” Ryder fingers the outer end of his toothpick, sharp where the other’s gone soft. “Kick my ass, why don’t you? Emmeline.”

“No way.” Her foot swings in the overgrown grass under the table. Nudges his ankle. “You’re never gonna get it.”

She makes a noise with her mouth like a game show buzzer. Might be annoying, except her lips are all shimmery pink with the watermelon LipSmackers she just slathered on. Ryder can’t be all that annoyed when he’s staring at her mouth.

“No, sir.” When he nudges her ankle back, she kicks him.

“God damn.” Ryder spits his toothpick into the grass behind him. Pops a cube of nicotine gum instead. “You gonna tell me what Em’s short for or do I gotta keep guessin’?”

Em leans back, stretches out her legs so her sneakers brush the insides of his calves. Christ. Who’d’ve thought the drag of khaki-colored polyester across his skin would turn him on?

She groans. That shit ain’t helping, neither. “It’s embarrassing.”

Available on Amazon in Kindle and paperback formats:

Mimi Duncan is just another nickname for someone who answers to half a dozen other things (or nothing at all, as she’s probably not paying attention). She enjoys writing about how people wind up kissing, several mugs of tea in a row, and minding her own business. She’s probably forgotten to switch her laundry.

Book cover and graphics by Meg (@redbelles on Twitter)

Thank you for being my guest, and for sharing your personal writing journey. The book sounds fantastic; the dialogue feels very real.

Hope it does well!