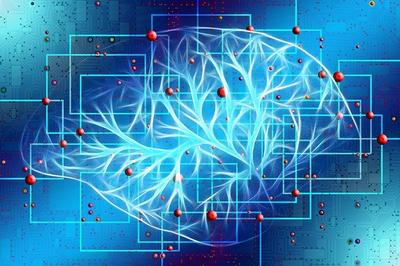 It happens to all of us. You’re tooling along with your new novel, banging out a chapters as a regular pace, when all of a sudden your creativity hits a brick wall. You generate a sentence; you edit the sentence; you put it back the way it was; you delete it and start over. Hours, days, weeks, go by, and your word count remains stuck. Before long, you’re avoiding your WIP altogether, because it’s so aversive to sit there staring at the screen or the page and not be able to write.

There are many causes for writer’s block, including stress. Indeed, since the experience of being blocked is in itself stressful, the situation can degenerate into a downward spiral. Of course, sometimes inspiration simply expires, for no particular reason. Sometimes a period away from the work can rekindle your ideas or your enthusiasm. Ultimately, authors learn that writer’s block is a somewhat mysterious experience we simply have to live through and deal with, however we can.

Now, however, computer scientists at Pennsylvania State University claim to have built an artificial-intelligence-based system to help conquer writer’s block. You can read about this research here: https://news.psu.edu/story/666920/2021/08/24/research/new-tool-could-help-authors-bust-writers-block-novel-length-works

The essence of their approach is to break up the work into units of (for instance) 100 sentences, analyze the concepts in those sentences, then map the concepts to common narrative units called semantic frames, basically categorizing their content. Given a set of semantic frames from what has already been written, their system then predicts the semantic frames likely to follow. The researchers claim that translating these forecast frames back into word clouds and showing them to authors could kick-start the writer’s creativity by suggesting how the next part of the book might develop.

The system has been trained with existing novels. It has learned what semantic frames tend to follow what other semantic frames. Basically, the system has abstracted common plot arcs and tropes, as well as the sequential patterns in which they tend to occur. Given what you’ve written so far, it will suggest likely following frames based on these patterns.

Alas, I think these computer scientists live in a totally different universe from us authors. Or at least from me! In my writing, I’m constantly striving for originality. I want to surprise and delight my readers with character and plot developments they do not expect. Indeed, when I get stuck, it’s often because I don’t seem to be able to rise to the challenge of creating something new and exciting. I feel like I’m rehashing my own previous books – or someone else’s.

The last thing I need is a set of suggestions that will make my book more predictable, or more like other books on the market.

If these scientists come around offering their system to me, I’ll say no thanks. However, the longer term implications of this research are even more chilling. How long will it be before AI-based systems can generate an entire novel, with no author involved? No more than a couple of years, by my estimate. What will happen when Amazon is flooded with hundreds of alpha billionaire daddy shifter hotwife reverse harem books, composed by the computer?

I’m willing to bet that readers will buy those books, too, because the stories will predictably arouse them, pushing the buttons promised by the tropes.

Will this be the final demise of indie authors? After all, computers don’t get writer’s block.

I’m not optimistic. On the other hand, I know there are some readers who, like me, reject all the sameness, working hard to find creative and original books, books that could not have been composed by a computer because they break the rules.

All I have to do is find those readers.

Can someone create me an AI system to do that?

The real problem will be how will you tell which books are artificially created? Will it say "anonymous" as the author? Or "Alexa" or "Cortana?"

It's hard enough to make any money on writing romance, what with all of the competition making it so hard to be noticed. And as you point out at the end, combining a bunch of favorite tropes will almost guarantee those books will be devoured. How on earth will anyone ever get to try something new? Or how will we market books that are "out of trope," the kinds you and I both like to write? Truly depressing.