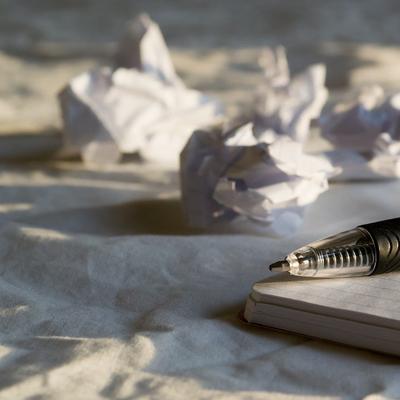 Image by Steve Johnson from Pixabay

There’s a popular belief that we writers are tortured souls. A bit of Googling will produce long lists of authors who committed suicide. Meanwhile, the process of writing is often portrayed as a painful, never-ending struggle to capture elusive ideas in the imperfect medium of language. Who is unfamiliar with the portrait of the author hunched over his scribbles in the chill hours between midnight and dawn, flanked by a smoldering cigarette on one side, the dregs of a whiskey on the other, the floor strewn the crumpled remains of discarded pages?

Aldous Huxley wrote: “Perhaps it's good for one to suffer. Can an artist do anything if he's happy? Would he ever want to do anything? What is art, after all, but a protest against the horrible inclemency of life?”

I really wonder about this stereotype, though. Most of the writers I know seem to be moderately stable and well-adjusted individuals. Of course they’re sometimes stressed by deadlines or frustrated by the difficulty of getting their ideas out of their heads and onto the page. Like me, though, they seem to write mostly for the joy of it, the thrill that comes from creating characters and their stories and sharing them with the world.

Do I sound defensive? It’s true that the world offers us erotica authors very little in the way of respect. But honestly, I don’t care most of the time. I love writing. I need to write, almost as much as I need to breathe. When I’m away from my WIP for too long, my spirit sags. I miss the magic of spinning fiction.

I’m proud of my writing, too. I’ve had a fair bit of success in my nearly seven decades. I have a lengthy professional resume. Still, my books (not listed on the official CV of course!) may well be my most prized personal accomplishments – even though most people in my life aren’t even aware they exist.

During the past month I haven’t been able to write, due to an injury. In some ways, that has been the most difficult part of the experience. When I couldn’t write – not just my WIP but also emails, blog posts, book reviews and critiques – I felt terribly cut off from my community of authors as well as from my creative self. I had to struggle to remember, and hold on to, the joy of being a writer.

Now I am finally starting to regain the ability for two-handed typing. I’m eager to get back to my poor, temporarily abandoned novel. Indeed, I wrote a page or so last weekend. Alas, this wasn’t easy. My right arm is healing, but typing tends to increase the pain quite a lot.

So at present, I am in fact temporarily suffering for my art. And I’m willing to do that, for now, in return for the excitement of feeling the story take shape and the satisfaction of seeing the words unfurl on the page.

Posted by Lisabet Sarai at 7:06 AM