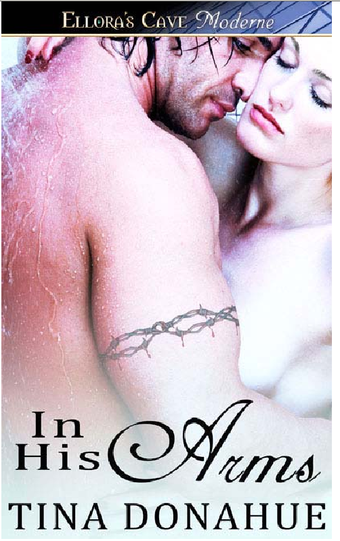 In His Arms by Tina Donahue
Ellora’s Cave, 2010

Summer Parrish submits to survive. Abducted as a teenager and sold into sexual slavery, she has no choice but to diligently satisfy the perverse desires of the men who pay her owner Anthony to use her body. If she resists, she’ll be savagely beaten and raped. If she tries to escape, she might well be murdered. She has no money, no family, no privacy, no freedom. Her life has no value except for the cash she brings in for her master.

Her future, as she ages and loses her beauty, looks bleak. Then Anthony gives her to RJ, a rough but kind ex-con, as thanks for saving his life. RJ is every bit as dominant as Anthony, but he’s also a gentleman, as well as a skilled and considerate lover. He seems to appreciate her as a person, as well as a sex partner. They share an immediate affinity, on an emotional as well as a physical level. In RJ’s arms, Summer can pretend that love will save her. However, she knows this is just an illusion. Though RJ might be nominally her owner, Anthony holds the ultimate power. If she strays, he can easily destroy the only thing in her life that has any meaning.

In His Arms by Tina Donahue is pure romance dynamite. Summer’s desperation and courage are evident from the first page. The lightning bolt connection between her and RJ is compelling and believable despite being a romance trope. Ms. Donahue immediately pulls the reader into the circle of Summer’s and RJ’s developing relationship. The first third of the book is devoted to their luscious, arousing and moving love scenes. This gives the novel an intimacy that is rare, at least in the romance I read. I felt I was right there with Summer and RJ, sharing their pleasure, their joy, their suspicions and doubts.

Gradually, the book opens up, with more action outside the bedroom, but the emotional intensity remains at top gain. RJ is determined to set Summer free. Much as she longs to be with him, Summer knows this is impossible. Anthony’s hold over her is absolute. This is a genuine and believable conflict, truly difficult to resolve. Ms. Donahue keeps the reader in suspense, almost until the last page. In RJ’s plan to free Summer from her chains, a million things could go wrong.

In addition to being a satisfying romance, In His Arms also paints what seems to be a realistic picture of the sex trafficking industry. Summer’s kidnapping and conditioning, with a combination of deprivation and pleasure, struck me as highly believable. Anthony grooms her for her role as a sex slave, sometimes indulging her, sometimes punishing her. The effect is close to brainwashing. Indeed, even after she escapes, it takes her years to recover from her decade in captivity.

This is not a sunny, feel-good novel where everything is fine once the hero and heroine are together. Summer and RJ both have scars. Tina Donahue makes you believe, though, that with enough time they can help one another heal.

Thanks for the wonderful review, Lisabet. In His Arms was a book of my heart. I loved the characters.

I loved them, too. I really hope you'll republish it!