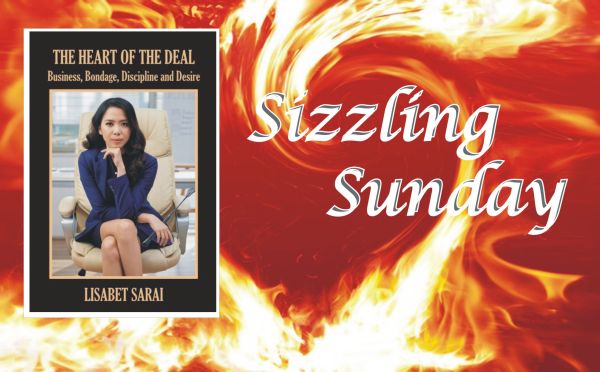 Today I’m giving you a long, torrid excerpt from my recent novel The Heart of the Deal: Business, Bondage, Discipline and Desire. I hope you enjoy it!

I’ve only been in Los Angeles once before, on a trip with Liu two years ago. My primary recollection of the city was how spread out everything was. That and the scene Liu and I had played the night before we returned to England.

We'd been staying in Bel Air. The exclusive hotel featured stucco bungalows scattered through a garden of palms and succulents. Plush and extremely private. “This is perfect,” murmured Liu as he nuzzled my ear. “No one will hear your screams.”

I laughed at that, a bit nervously, and glanced back at him. He was totally serious.

“Go into the living room. Take off your clothes. Stand in the middle of the room facing the windows and wait for me.”

My heart pounding, I obeyed him, as I always did. I trusted him completely, knew that any path he set me on would ultimately lead to pleasure. I could feel the rich pile of the carpet between my toes as I waited. It seemed a long time. Through the open window, I could smell the vegetation and hear the twitter of night birds. Something, a moth perhaps, slammed against the window screen and startled me. Then there was another sound, behind me. Liu had joined me at last.

I turned around to see a stranger instead of my beloved Liu. The man wore tight leather pants, a black spandex singlet, leather gloves, and a leather mask that hid his entire face. The eye holes and mouth were ringed with blood-red. He carried a black gym bag that I had never seen before. He set it on the rug in front of me, and then he circled my body, appraising me. He moved with an arrogant swagger that was totally different from Liu’s normal manner.

I didn’t dare move; I held my breath. My nipples tightened into hot, painful nubs under the man’s silent scrutiny. He reached out and strummed at one with a gloved finger. I winced, and he gave a low, ominous chuckle.

“Los Angeles always brings out the sadist in me,” he said softly. I recognized the voice; it was Liu, and yet it was not. There was an unfamiliar edge there. He rummaged in the bag and retrieved a coiled thong of leather, perhaps half an inch wide.

“Give me your hands. Wrists together.” A shiver ran through me. He had never bound me with anything rougher than a silk scarf. Nevertheless, I followed his instructions.

He looped the strip of leather several times around my joined hands, then wound it between them, tightening the grip on my flesh. The other end of the thong curled on the floor for a moment, while he fetched a chair from the dining area. Standing on the chair, he threaded the free end of the thong through a shiny loop embedded in the ceiling and then back down toward me. “Raise your arms above your head,” he ordered, and as I did so, he took up the slack, so that I could not lower them even if I wished to.

He tied the free end loosely to the chair and went back to his bag. When he returned, he carried a studded belt adorned with steel rings. As he buckled it around my waist, his gloves brushed against my skin. Lust surged in me. I was weak with desire for him, craving more of his touch. As if reading my mind, he slapped my buttocks, hard, with those leather-clad hands.

“How’s that?” he asked, softly mocking. “Do you want more?” I stood there silent, blushing, dripping.

With the belt in place, my tormentor untied the thong from the chair. He ran the end down from the ceiling, between my breasts, and through a ring centered just above my navel. “Spread your legs,” he commanded. When I did so, he slipped the leather between them, pulling it tightly into the cleft of my sex, and then up between my butt cheeks.

I thought I would faint. The rough edges bit into my delicate tissues, irritating and inflaming them.

The slightest movement brought torture. I felt his hands near the small of my back, slipping the leather through another loop in the belt. He gave a jerk, pulling the cord still tighter, then somehow fastened it so that it stayed taut.

I was split open by my bonds. In front, the thong grazed my clit and rasped against my inner lips. In back, I could feel its pressure against my anus, more subtle but equally arousing. I moaned, wondering if I could stand the overwhelming sensation.

The bonds were just the beginning, though. “Are you comfortable, pet?” Liu asked, stroking my hair back from my face. Of course not, I wanted to scream, my shoulders ache, my hands are going numb, my clit is so sore that I won’t be able to close my legs tomorrow. But all these discomforts were overshadowed by the shimmering of my orgasm, off in the distance. And even that paled to insignificance compared to the knowledge that I pleased him.

From the bag, Liu extracted a vicious-looking strap. He snapped it once or twice through the air. I looked on in fascination and terror. I was afraid of the pain, but even more afraid of disappointing him. Still, I gasped as the first stinging blow landed on my rear, and writhed against my bonds in a futile attempt at escape.

That one convulsion was all it took to send me over, the first time. The thong wedged against my clit had done its work. Liu did not stop beating me, though. The strap sliced across my flesh, again and again. Strands of fire raced along all my limbs, met and flared in the depths of my sex. The swollen tissues between my thighs were as hot and raw as my buttocks, both tortured and teased by the kiss of leather.

I don’t know how long he worked on me. I had never known him to be so fierce, but I didn’t want him to stop. I was floating in a crimson haze, breathing in time with his savage strokes. I forgot myself, thinking only of him, basking in the intensity of his desire. I forgot to notice when, or whether, I climaxed. There was only Liu, his energy and will, his pleasure. That was the only thing that mattered.