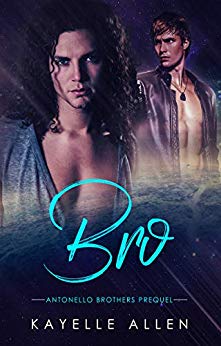 Half-human/half-Kin master thief Senthys Antonello has grown up with a chip on his shoulder. He’s tired of being under-estimated due to his small stature. He winces every time his peers ridicule him for his part-feline heritage. And as much as he admires his adoptive father, the all-powerful Luc St. Cyr, he fears he can never win the approval of the stern and distant head of the Thieves’ Guild.

Khyffen Antonello has more serious problems. Bound into slavery as a child, abused by his owner, he’s forced to provide sexual service to both men and women as an alternative to prison. He’s saving every penny in an effort to buy his freedom, but that goal is many years in the future. Meanwhile, he survives by suppressing his emotions and not trusting anyone.

Senth and Khyff are half-brothers, Khyff the elder by two years, but neither knows of the other’s existence. In Bro, the prequel to Ms. Allen’s novels At the Mercy of Her Pleasure and For Women Only, they meet for the first time. Needless to say, given their emotional baggage as well as their real-world issues, the encounter is fraught with suspicion and pain. That’s one reason why St. Cyr has avoided telling Senth about his brother for so long. However, the immortal St. Cyr judges that the time is right to bring the two young men together. Each had thought he was alone in the world; the revelation of that they are family helps overcomes the many factors that divide them.

Bro is a dramatic, complex introduction to the two characters – perhaps too complex for such a short tale. I felt a bit as though I was drowning in detail, not only about Senth’s and Khyff’s backgrounds, but also about the history and society in which the characters live. Of course the author knows a great deal about her fictional world, since she has penned (at least) two novels set in the Tarthian empire, but Bro would have been an easier read if she’d held back some of this knowledge.

Nevertheless, if you focus on the characters and let the intricacies of the world building wash over you, Bro is an engaging and enjoyable read. It sets up some major conflicts, which I expect are explored and resolved in the novels that follow. (Long ago I read at least one of them, but I believe Ms. Allen has substantially revised them since.) And yes, I’m curious enough, especially about who Luc St. Cyr really is, to consider reading further – which is, I guess, the test of a prequel’s effectiveness.

I just read this and I am looking forward to reading the novels. I agree that a lot of info is included, but it made me curious about the universe these brothers are living in. Thanks for your thoughtful review!