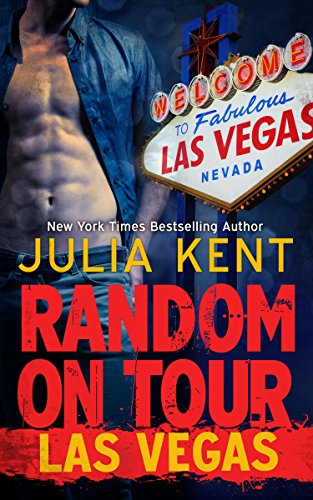 What’s the most difficult genre to write well? I’d nominate romantic comedy. It’s really tough to create a story that is simultaneously funny and sexy, without pushing the balance so far toward the ludicrous that you lose the heat, or getting so serious about the bedroom interactions that you forget to make people laugh.

I’ve hosted Ms. Kent many times on my blog, so I’m familiar with her style, but this is the first time I’ve read one of her books. (Looking at her Amazon page, I come to the conclusion that I may be the only person in the universe of which this is true!)

Random on Tour: Las Vegas is part of a series featuring the indie rock band Random Acts of Crazy. In this installment, the band gets a gig in Vegas. All four musicians are excited—after all, this may be the break they’ve been waiting for—but for Darla, the band’s manager, the job has special significance. Having grown up in poverty with her disabled mother, just getting by and making do, she sees Las Vegas as the pinnacle of achievement, something like being admitted to the gates of Heaven. She’s dazzled by the glitter and the glamor, left breathless at the thought of all that money changing hands, based solely on Luck.

Darla’s no dummy. Dealing with all the details for the band, she can be hard-headed, no-nonsense, cold-blooded and organized. Las Vegas blows that side of her totally out the window. Starry-eyed to find herself on the famous Strip, spurred on by a new determination to expect the best from the universe, she finds herself at the roulette table. At first fortune, and her own powers of observation, lead to big wins, but before she knows it, she has gambled away not only her own savings but all the band’s money as well.

Shocked, desperate and wallowing in guilt, Darla hides from her lovers and friends in the first place she can find – at an animal-themed fetish fair. Faced with couples dressed in chicken suits, wandering among booths selling cat-tongue vibrators and fur-tipped butt plugs, Darla has to find a way to recoup the band’s funds – and to live with her own mistake.

My summary doesn’t do justice to the delicious absurdity of this story, or to the intricate emotional interactions among dominant Joe, laid back Trevor and the woman they both adore. This is a highly enjoyable book, a classic romantic comedy with plenty of both titters and titillation.

I have two caveats. First, I felt that Random on Tour: Las Vegas might have relied too much on the reader’s familiarity with previous installments in the series. The numerous references to events in earlier books (including multiple references to the same incidents) sometimes seemed to get in the way of my fully understanding the current story. I can understand that dedicated readers will already know who Mavis is, but I personally feel every book, series or not, should be complete in itself.

Second, I have to say I didn’t quite believe Darla. The gulf between her practical intelligence and her ditziness seemed too wide. She’s clever, snarky, devious, outrageous and hilarious. Somehow I didn’t find it plausible she could also be so dumb.

Of course, I suppose that discrepancy is at the root of the book’s humor. If Darla were less of a Jekyll/Hyde character, the book might not work. It’s hard to know.

In any case, I was able to suspend disbelief enough to have fun reading it.