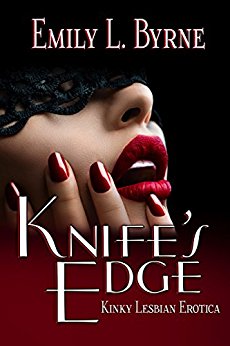 If you do buy Knife’s Edge, though, you’ll get more than just this gem. This diverse collection includes tales of kinky female pirates, outlaws, cowgirls and field hockey players. Within its pages you’ll find vampires, aliens and Greek goddesses. The variety of settings amazed me, though almost all the stories feature similar dynamics—a submissive main character brought under the spell of a powerful, dominant, often older woman.

Aside from “Incident”, one of my favorite tales was “Planet 10”. The protagonists in this story belong to different, non-human species; they demonstrate that desire can bridge almost any gap. “Cowgirls and Science” is a cheeky rodeo fantasy. Ms Byrne brings the two rough riders who seduce the archaeologist narrator to vivid life. “Arachne”, a lesbian retelling of the ancient myth, is another stand-out, with particularly gorgeous writing:

I sit at my loom like a spider in her web and my cloths fly through the cities on gossamer wings. Great citizens and their wives come to watch me as I weave and to marvel at the results. Tapestries and chitons, hangings and coverings for wall and floor and door, all these and more climb new-born from my loom. They leave the city, my children do, to go to foreign lands and across strange seas. I long for them, each one beloved, brought to life with infinite care by my fingers.

But Arachne, though a great artist, is too proud of her gifts. “I do not believe in gods or their followers. My faith hands on the power of my shuttle alone.” The goddess Athene challenges her, breaks her—and ultimately rewards her by accepting Arachne’s devotion.

The brief but intense “Polar Vortex” also grabbed me. The unnamed women in this story are a D/s couple, but some unexplained events have driven them apart emotionally. Now the dominant tries to recapture the magic of their connection by requiring her sub to immerse herself in a bathtub full of snow. This creative scene melts the icy walls that have been separating them.

I didn’t like every story in Knife’s Edge. The lead-off tale, “Reunion at St. Mary’s”, struck me as contrived and a bit silly. “Wage Slave”, with its sexy boss lady taking sexual advantage of her nerdy system administrator, was too predictable to be interesting. Overall, however, Emily L. Byrne has put together a fine collection of beautifully crafted lesbian fiction. Highly recommended.

[I freely chose to review this book, having read other work by this author.]