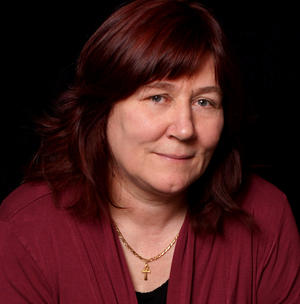 I’m delighted to have my friend and blog-mate Ashe Barker visiting today, to tell us a bit about herself and her latest release, Theirs:Found and Claimed. Oh, she has a giveaway at the end, too! ~ Lisabet

Lisabet: How many books have you written? Are they all spanking fiction?

Why do you enjoy writing sci-fi?

Because I love the idea of playing God. I can create just the world(s) I want, set up whatever social system suits my story, and craft the most amazing characters. The usual laws of physics, time, and cultural behavior don’t count so the story-telling can be much more creative and inventive in an alternative universe. Stories which might be really controversial if written as a contemporary romance can be ‘cloaked’ in a sci-fi.

Do you see writing as a career?

Yes. I try to be fairly ordered about it. I like to be at my desk (well, more accurately the kitchen table) laptop fired up and coffee to hand, by nine in the morning and I tend to write for most of the day then. There are also a lot of related tasks to keep on top of, mainly to do with promo or research, or keeping in touch with readers and other authors. It’s definitely a full-time job for me.

If you could have been told one thing that you weren't told when you were a teenager, what would you like to have heard?

I was given lots of advice as a teenager, much of it unsolicited and not especially good. I think we all have to make our own mistakes, but hopefully I haven’t made the same mistake to many times. That would be sad.

Looking back, I think the most important thing I picked up along the way was that we all have choices, all the time. We’re entitled to choose our own way in life, but we should also be ready to own and accept the consequences of our decisions.

Someone once invited me to cast my mind forward to a time perhaps sixty years from now when I’ll be long-gone and my daughter (currently eighteen) is herself entering old age. Imagine she’s talking to her grandchildren, telling them about me. What would I like her to be saying? My actions now, today, will dictate what those obituaries might be so don’t leave it until later to be the sort of person you want to be remembered as.

If you had to describe yourself using three words, it would be…

What would you do if you were the last person on this earth?

Turn out the lights.

And now, onto the information about the book! 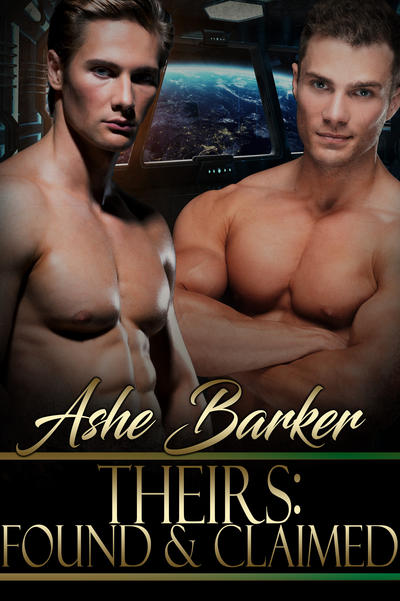 Who is she? What is she? And what will they do with her?

When they board a derelict spacecraft in search of valuable scrap metal, the last thing Luca and Sylvan expect is to stumble upon a beautiful, naked woman in need of medical assistance. Despite her protests, they bring her back to their ship, treat her illness, and take it upon themselves to look after her.

After she contracted the virus that wiped out her people and killed everyone else on her ship, Llianna didn’t expect to survive, and she is shocked when she awakens from a comatose state with two men standing over her. Once she regains her health, however, she is horrified to realize that she is about to enter her fertile period, a uniquely vulnerable time for females of her species.

Knowing that she will end up begging Luca and Sylvan to take her in any way they please if she doesn’t act quickly, she flees in her partially-repaired ship, only to be caught, stripped bare, and spanked soundly. The stern punishment leaves her desire burning even more fiercely, and soon she is writhing in ecstasy as her handsome rescuers claim her hard and thoroughly.

Though Luca and Sylvan make it clear that she is free to go once her ship is finally fully operational again, Llianna finds herself yearning to belong to them completely, and as she learns to submit to their firm, loving dominance, her passion for them grows more intense with each passing day. But when she discovers that she is not the last of her kind after all, will she leave the men she loves to live amongst her own people?

Publisher’s Note: Theirs: Found and Claimed includes spankings and sexual scenes. If such material offends you, please don’t buy this book.

“Am I hurting you?” Sylvan is sliding his fingers in and out of my wet pussy, the motion slow, deliberate, utterly seductive. All the while Luca continues to torment my clit, teasing me to a near frenzy then allowing his fingers to slide away until he barely touches me.

I shake my head as I gnaw on my lower lip. This is wonderful, the sensations they are creating are sheer unadulterated bliss, but it’s torture too. I yearn for… something, something more. But at the same time I never want this to end.

“That’s two fingers. This is three…” Sylvan pulls his fingers out of me again, then carefully parts my pussy lips with his free hand before slipping back inside. The stretch is delicious, the slight burn at my entrance intoxicating. I am aware of every callused centimetre of his long digits as they ease back inside me and my body reshapes to accept them.

“Does this hurt?” The question is murmured, Sylvan’s voice low and compelling, “or this?” He somehow twists his hand within me to change the angle of his penetration. He scissors his fingers, rubbing a spot somewhere on the front wall of my pussy. Everything I was already feeling is intensified, as though white lights explode in my head, behind my eyes. My entire body convulses now and I let out a high-pitched moan.

Luca takes a firm hold on my clit and squeezes hard, pulling as he does so. The pleasure is beyond belief, and seems to rush into that one single place, the very core of my being. Helpless to resist, unable to control my response even if I wanted to, I splinter.

There’s warmth, wetness, even more than before. Sylvan’s fingers move easily inside me, skilled and accurate, drawing my response out, bringing me back to that shimmering peak again and again. I am floating, my bones liquid, my senses shattered. There is nothing in this universe beyond the amazing sensations exploding at my core then rippling out to fill every extremity of my body.

I lose any sense of time, of space, but that does not matter because they have me. I drift, suspended between reality and some magical, mystical realm beyond, unable to comprehend what has just happened. I settle back down, breathless, and the heady sensations dissipate. I become aware of my surroundings again, and of my still-overwhelming need. The phase is relentless, assuaged only momentarily by the rush of my release. If anything, my need to have Sylvan inside me, fully sheathed within my needy pussy, is greater now, even more compelling.

“She just gushed. We’re swimming in it down here.” Again I do not comprehend Sylvan’s meaning, but his tone is warm and he seems satisfied with the situation.

“Excellent, that’ll help. Now would be a good time then…” Luca relinquishes his hold on my clit and reaches for my spread legs. He grips me behind each knee and pulls my thighs wider apart, at the same time tilting me up a little as though to offer me to Sylvan. “Relax, sweetheart. You’ll love this bit, I promise.”

I go limp in Luca’s arms as the other male rises up to kneel on the bed. I crane my neck to peer down and watch, detached almost as Sylvan positions his awesome cock at my entrance then begins to press forward. He uses his fingers to part my pussy lips to gain better access, then suddenly the entire head of his cock is inside me. The lips of my pussy are spread wide, stretching around him and I am intensely aware of every intimate detail.

I stiffen, and whimper softly. Luca’s breath is on my neck. “Are we hurting you?”

Sylvan leans forward, his right hand on the bed to support his weight and his left finds my breast. He caresses the lower curve then flicks my nipple with his fingertip. The unexpected stimulation unleashes another rush of sensation and I thrust against him, impaling myself yet more on his solid cock. He sinks in, and the stretch feels near impossible as my body parts to admit him. Then he stops. He has reached the limit, the point beyond which it is not possible to proceed. I chance a quick glance down to see perhaps half his length still visible and I know this is not quite correct. I was right, he is just too large, too—

“Aagh!” I scream as a searing pain stabs me, momentarily taking my breath away. In that instant Sylvan moves, shifts, and the remainder of his massive cock drives forward to fill me.

To celebrate the release of Theirs: Found and Claimed, and of course in honour of Valentine’s Day next week, I’m offering one reader the chance to win their selection from my backlist.

Three runners up will each get a coaster featuring Theirs :Found and Claimed. To enter, use the widget below.

The competition closes on 13 February, so be quick.