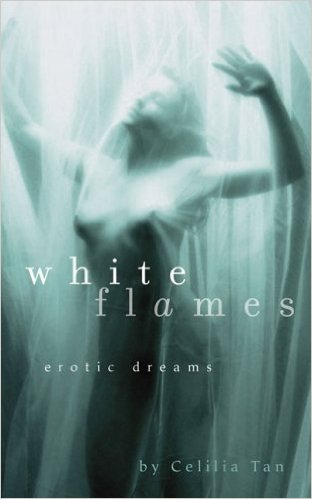 Hallelujah! That was my cry after reading the first two stories in Cecilia Tan's single-author collection WHITE FLAMES. Needless to say, my husband, reading in bed next to me, was a bit startled. When I explained, though, he understood completely.

What does it take for me to be excited by a story? Each case varies, but I look for an original premise, a unique voice, unconventional characters, and most of all, a treatment of sex more as an emotional or spiritual adventure than as a conjunction of body parts.

I'm delighted to report that, by my definition, many of the tales in Cecilia Tan's collection are exceptional.

A raw spring day in Somerville, me in galoshes and a pair of my father's old painting pant with a snow shovel, cursing and trying to life a cinderblock-sized (and -weighted) chunk of wet packed snow off the walkway of our three-decker.


Vivid and concrete one moment, Ms. Tan can wax tender and raunchy the next:

Morgan's hands travel up my thighs like they come out of a dream. It never occurs to me to stop her. Sex with Morgan is as easy and natural as saying yes to a bite of chocolate from the proffered bar of a friend. Before her fingers even reach the elastic edge of my panties I am already shifting my hips, already breathing deeper, already thinking about the way her fingers will touch and tease me, how one slim finger will slide deep into me when I am wet, how good it feels to play with her hair on my belly, how much I want her. With Morgan, I always come.


Then there's "Baseball Fever", Ms. Tan's hilarious and highly explicit fantasy about a Yankee rookie for whom she has the hots: "This guy's got destiny. He fits right in with multi-ethic New York, too - half-black, half-white, cannily polite with the media but cocky as hell when he gets on the field." I'm not much of a sports fan, but when Tan brought Tiger Woods into the final scene of the fantasy, "just to make sure it's not 100% percent heterosexual", I laughed until my stomach hurt.

At first glance, one might dismiss "Halloween" as an instance of the overworked "girl meets dominant man of her dreams in a bar" genre. Tan brings new life to the old scenario, partly due to the kick-ass attitude of the world-weary Goth narrator. "The Hard Sell" is a tale of a modern woman longing to escape from the labels and slogans that society applies to everything and everyone around her - including the man who drives her into a frenzy.

Although WHITE FLAMES includes some excellent realistic pieces, I must admit that myth and magic lie at its heart. The middle hundred pages of the book are devoted to fantasy, starting with a stunningly erotic retelling of "The Little Mermaid" then flowering into more original tales. In "Bodies of Water", a team of archeologists discover an ancient ship on the floor of the Mediterranean. The discovery transforms them, both literally and figuratively. "Dragon's Daughter" is a fascinating tale of a Chinese-American girl who learns that she's an immortal who can travel through time and space to anywhere Chinese culture dominates.

This is the ignominy of the American educational system: that to speak the tongue of my ancestors I had to fight to be enrolled in a special college class and trudge to it every morning at 8:00. I didn't think I knew the words to explain what I was doing there, anyway... I had no words yet for worry or conflict or secret or dream.


Three amazing stories featuring the same characters - Stormclaw and The Lady in Black - conclude this section. Like so many characters in the today's wildly popular "paranormal" genre, Stormclaw and the Lady are "elementals" - creatures of wind and fire and earth. They are not just people with special powers, however. They are truly inhuman, incomprehensible to and uncomprehending of the mortals among whom they move. They are drawn to human passion, yet do not understand it.

These stories are lyrical and intense, strange and haunting.

He flies. He flies over clouds as dark as his hair, his eyes, his mood, as he thinks about her. Stormclaw is the dragon of the wind, coiling his power like a cyclone, soaring over night sky, moving eastward like a front of incipient weather. He sees without eyes, senses without skin, when he is the wind, considers without thought, and loves without a heart.


Stormclaw haunts seedy bars, taunting the men who drink there, trying to remember what it is that he seeks.

Stormclaw feels the first strike of the leather cat-o-nine cross his back like the first bite into a sour summer fruit, a rich and intense pleasure. He draws breath waiting for the next blow to fall, and as he exhales he feels Ravenhair's breath on his shoulder--they are like one animal, tensing and then letting go, and then gathering themselves again. Breathe in, tense for the strike, then let go as the pain rains down around you.


One of the delightful aspects of this collection is its inclusiveness. These stories embrace all orientations, without self-consciousness or politicizing. WHITE FLAMES offers FF, MM, FMF, and FFF tales, not to mention sexually-aware mermaids and robots. In Ms. Tan's worlds, desire is a universal force, not confined to any particular gender or even species.

The book ends with three science fiction tales, of which the best is "The Spark". What if the magical energy that seems to animate the gods and goddesses of rock and roll was a real, measurable force, that could be stoked, and shared -- and lost?

WHITE FLAMES includes a few stories that are hohum, but Ms. Tan hits the target far more often than she falls short. If you enjoy literary erotica that will make you wonder as often as it makes you sweat, I highly recommend this volume.