"Be wise as serpents and harmless as doves" (#civilrights #sixties #literaryfiction) My latest book is a literary novel called Serpents and Doves. It is a book that took forty years to write. It is about my college experience in the mid-1960's. It is fiction but, as with all decent fiction, it has a lot of the author in it. The title comes from the new testament Book of Matthew. When Jesus was first sending out the disciples out to preach he said, "I send you out as sheep among wolves, therefore be wise as serpents and harmless as doves." The novel is about learning what that really means and about finding wolves in places where there should be sheep.

I was in the middle of much of the protesting, not so much the war as the civil rights protests. I had many black friends. I had never experienced that in my pre-college days, but when I got to college I met many great young men who were all caught up in Dr. King's Civil Rights movement and those friendships pulled me right along into the movement as well. I was not a major player, more around the edges, which put me in a position to observe.

That of course is what writers do. We observe then shape and record what we see. My recording/shaping took a long time. I wrote more than a thousand pages before I really began on Serpents and Doves. I just couldn't get hold of a starting thread.

I think that is among the hardest thing any writer can do. The old chestnut about fearing the blank page is absolutely true, but from a different angle than most people think. Most writers when they sit down to write have some idea of what they are going to write, but finding that first thread to begin weaving the whole cloth of the story, that is hard.

I have found that thread for other books and written five including a volume of short stories, but Serpents and Doves was particularly difficult, perhaps because it is so close to my own life. I had to get my mind around how to present the happenings of my life without libeling any of the people therein. That's why, if anyone who knew me in those years should read the book, they are likely to recognize some of the characters with different names and slightly filed off serial numbers.

My life since college has been interesting. I have traveled around the world with my wife and children having lived in Spain, Germany and Italy as well as Virginia, Indiana, and California. A novel set in Indiana is probably coming down the pike. I am making notes and considering things right now but it will get written if I live long enough. Right at the moment I am concentrating on short stories and criticism as well as selling books around Southern California.

The mid-sixties were turbulent: the Vietnam War, Protests, the Civil Rights movement, and the Sexual Revolution. Stephen Mitchell, a naive California church boy, goes off to school at a small church college in Tennessee, where he learns about sex, betrayal, friendship, and what it really means to be black in the segregated south.

The cop bent down a bit more and looked at Stephen. “Whose yer uncle boy,” the cop asked.

“West Side, eh? He one of them integration preachers?”

Stephen was stunned and he didn’t know how to answer. If he lied and said no the cop was gonna wonder why this single white boy as riding with these coloreds, and if he said yes the cop might decide to make life tough for all of them.

The cop didn’t like the answer. He blinked at them, rain running off the patent leather bill of his cap and said, “I think maybe ya’ll better step on out of the car here,” he said.

“But officer,” Stephen began and Robert knocked his knee against Stephen’s, clearly saying shut up.

“Yes Sir,” Charlie Horse said as he opened his door. The other doors opened and the young men stepped out. Stephen was boiling, but he kept his mouth shut.

“Ya’ll just go ‘head and lean up on the side of the car,” the cop said. All the black men did as they were told, assuming the position, but Stephen once more protested. “We didn’t do anything. We were just driving down the road.”

The cop did a step through and dropped Stephen to the hard concrete of the sidewalk on his face. “Don’t you sass me boy, I am the PO-lice and when I say do something you do it.”

Stephen was stunned and his nose was bleeding from being bounced on the concrete. The cop had a knee in the middle of his back and was patting him down looking for weapons, and as the hands went roughly over Stephen’s sides one thought kept rolling through his mind, but, I’m white. I’m white, I’m white.

“Now you just stay right here boy,” the cop said “while I check your friends for guns.”

Buford stepped up to Reg and Bobby and ran is hands perfunctorily down their sides then made a point of jamming his hand hard between their legs. Both men winced, but didn’t take their hands off the roof of the car.

The first cop, half crawled in the still open doors or the car, turned off the engine and pulled out the keys to go and open the trunk, meantime Buford had searched Charlie, Silent Al, and Stan, giving them the same final squeeze of their testicles. They all stood tight.

Frank came back to Stephen who had done as he had been told and not moved. There was a growing puddle of watery blood forming where his nose had dripped to the concrete. Frank poked his toe into Stephen’s ribs, hard enough to hurt, but not break anything. “Ya oughtenta hang around with niggers boy. It could get ya killed.”

“All Right ya’ll,” Frank said. He bent down and hauled Stephen up by the collar. “Get on outa here. But don’t you let the sun set on you in this neighborhood.” He tossed the keys at Charlie.

“Yes sir,” Charlie Horse said. Everyone got into the car. Charlie hit the starter and the engine turned and turned, but didn’t catch. He let the button go then cranked it again. This time the engine coughed, stubborn because of the wet. He hit it again, the engine coughed again and caught. After he let it run for a moment he slowly pulled away from the curb watching the two cops in the rear view mirror. After a moment he glanced at Stephen in the mirror. “You alright Steve?”

“Yeah,” Stephen said, pulling a handkerchief from his pocket and holding it against his nose.

“Is it broke?” Robert asked

“Yeah, yeah,” Stephen said. The front of his rain coat was stained with blood. “But we didn’t do anything!”

“Just like we told ya. Driving while Black, and especially with a honky in the car.” Reg said. “We damn lucky he didn’t decide we were agitators or something. Would have jailed us sure or maybe shot us, but he just decided he’d settle for just hoorahing some niggers.”

Robert said, “Yes you did know, because we told you, but now you don’t just know. Now you understand.” 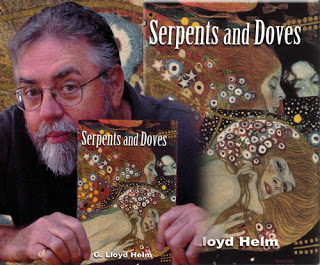 G. Lloyd Helm writes fantasy but fantasy of a different type. In his work people have to power to stop war by simply saying “stop” and to change the universe by belief in a system called “the design.”
Helm has been writing for more than forty years, short stories and three novels. He is currently working on a sequel to his first novel OTHER DOORS. His work harks back to the classic fantasy of the golden age but is as modern as the war in Afghanistan.

G. Lloyd has traveled the world spending ten years in Europe, living in Spain, Germany, and Italy with his wife of forty years. His epitaph will no doubt read, "Ne're do well scribbler, and part time genius. He married Well."

Goodreads
https://www.goodreads.com/author/show/2809594.G_Lloyd_Helm
Posted by Lisabet Sarai at 3:00 AM