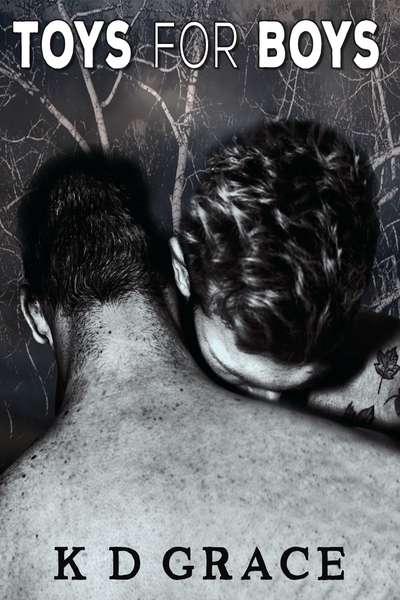 One of the best holidays I ever had was a fourteen-day192 mile walk across England on the Wainwright Coast to Coast Path. The path begins at St. Bee’s Head, on the Irish Sea. It crosses the entire Lake District, then the Yorkshire Dales and finally the North York Moors, finishing at Robin Hood’s Bay on the North Sea. It was one of the hardest, most inspiring, most spectacular things I’d ever done. I don’t mind saying there were times I wasn’t sure I could finish it and there were times when I was a little bit scared, but I would do it again in a heartbeat.

Doing it again is exactly what I did when I wrote Toys for Boys. While Doc and Will’s adventure unfolded in my imagination, I got to live the whole experience of that wonderful walk over again while at the same time adding a few challenges and unexpected surprises for my boys.

Alpha nerd Will Charles teams up with Caridoc ‘Doc’ Jones in a coast to coast walk across England reviewing outdoor gift suggestions for the Christmas edition of Toys for Boys—an online magazine dedicated to the latest gadgets to tickle a man’s fancy. Will is recording their adventures with the latest smart phone technology. Doc is reviewing the latest outdoor gear. The two quickly discover the great outdoors provides even better toys for boys, toys best shared al fresco, toys that, in spite of Will’s great camera work, will never be reviewed in Toys for Boys.

Note: Toys for Boys has been previously published as part of the Brit Boys: With Toys boxed set. 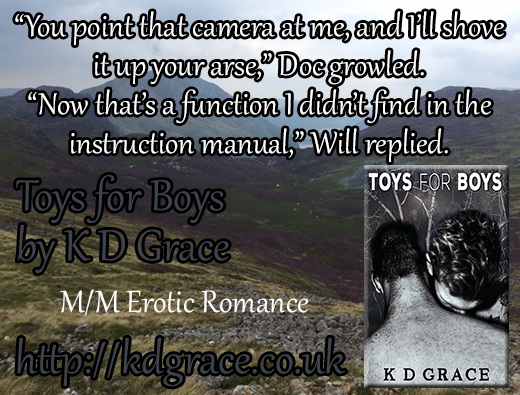 “We’re not going to make Ennerdale tonight,” Doc yelled into the wind.

Will’s answer was incoherent, an incoherence that wasn’t entirely because the wind was interfering with Doc’s hearing. They’d already got lost once and had fought their way back to the trail. Doc was fucking freezing, but he had spent enough time outdoors in bad weather to push his body way further than most people could. No matter how fit Will was, Doc recognised the signs of hypothermia when he saw them. They had to get out of the weather and get warm.

They lost the trail twice more before Doc made the executive decision to set up a tent in the first spot halfway flat. To his surprise it had been the damn urBrain that had saved the day. Will had downloaded detailed, interactive OS maps, but in his condition, Doc doubted if he could read his own name in bold letters, let alone the contours of a map. He’d pried the device, safe from the weather in its own little waterproof sheath, from Will’s icy hands and, with the light from the screen, he was able to find a wooded area relatively flat and as shielded from the weather as they were likely to get. The rain turned to hail and the Arctic wind made it feel like bird shot against all bits of exposed skin as Doc struggled to set up the tent. He’d shoved another energy bar at Will, and when he’d only stood there looking at it, Doc had opened it and half crammed it down his throat before he went back to work on shelter, desperate to get Will out of the weather.

Once the tent was secure, he chucked the bags inside, then grabbed Will by the collar and dragged him into the tight little space.

The energy bar must have helped. Will seemed coherent enough. “I can’t feel my hands,” he said, battling to get his sleeping bag out of its waterproof sack.

“Give me that,” Doc said through chattering teeth. “Let me do it. My hands aren’t all delicate and dainty like yours.”

“Would you look at that?” Will said as Doc grabbed the bag. “Amazingly, my middle finger works just fine.” He flipped him off.

“So does your smart mouth.” Without thinking, Doc zipped the two bags together.
“What are you doing?” Will was suddenly serious.

“You’re hypothermic. Get your wet clothes off and get into the bag.”

“Oh. Right.” But Will could no more manage the buttons and zippers on his clothing than he could his sleeping bag.

This time when Doc shoved his hands away and pushed the waterproof jacket off his shoulders, Will only watched, eyes focused on the process as though it were something totally new to him. Doc cursed the fiddly buttons on the man’s shirt, his own hands none too agile from the cold and wet and the fact that he was undressing Will fucking Charles, about whom he’d been having less than pristine thoughts since his first view of the man’s arse. Will fucking Charles with whom he was about to cuddle down into a sleeping bag butt naked, never mind that it was with good reason.

Will sucked in a harsh breath. “Your damned hands are like ice cubes, Woodsy.”

“Oh shut it, William, or I’ll kick your arse outside and make you sleep in the rain.”

“Fucking like to see you try.” Will’s teeth were chattering hard, and his whole body trembling from the cold as Doc worried the shorts down over his commando bum and found himself face to cock, which made the blighter burst into hysterical laughter. “Have we ulterior motives, Mr Jones? Where the hell’s urBrain? I have to get this on camera.”

“Want a selfie of your cock, do you, you shivering bastard?” Doc turned his attention to the walking boots, which had stopped all progress of getting the man naked. Focussing on something other than the naked, very vulnerable body of Will fucking Charles helped clear his mind. He was too cold, too tired to get hard over what was essentially a matter of life and death, he told himself. Surely!

Once the boots were dispensed with, he shoved the man into the sleeping bag and went about the awkward business of stripping himself.

“Where the hell is the urBrain when I need it?” Will chuckled between chattering teeth.

“You point that thing at me, and I’ll shove it up your arse.” Doc’s own teeth sounded like a couple of spastic tap dancers had been turned loose in his mouth.

“Now that’s a function I didn’t find in the instruction manual,” Will replied.

What started out as ribald comments on the shrivelling effect of the cold on male tender bits dwindled to nothing more than the sound of convulsive shivering. By the time Doc had shed the last of his clothes and shoved his way down next to Will, he was seriously worried. It took all his strength, which wasn’t a helluva lot at that moment, to pull the bloke into his arms and hold him close enough to share body heat, what little there was of it. The worry subsided a bit when Will threw his arms around his neck and gave a harsh chuckle against his throat. “This was seriously worth getting hypothermic for. Pity I’m too fucking tired to appreciate it.”

Though Doc agreed wholeheartedly with the sentiment, his focus was on getting Will warm. Then he’d get out the backpacking stove and fix them something hot. That was the last thing he remembered, that and the feel of Will’s body shivering against him, in the tent redolent with the male scent of core heat and wet gear, all overlaid by the icy metal smell of the fells in a storm. 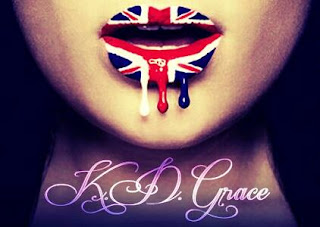 When she’s not writing, K D is veg gardening. When she’s not gardening, she’s walking. She walks her stories, and she’s serious about it. She and her husband have walked Coast to Coast across England, along with several other long-distance routes. For her, inspiration is directly proportionate to how quickly she wears out a pair of walking boots. She loves mythology. She enjoys spending time in the gym – right now she’s having a mad affair with a pair of kettle bells. She loves to read, watch birds and do anything that gets her outdoors.

Welcome back to Beyond Romance. You are obviously a far more robust person than I am. Reading your excerpts left me with no question about whether *I* would be up to that trek.