Happy Saturday! I hope you’re in the mood for some serious kink today. I’ve got a Saturday Spanking excerpt that’s bound to make you sweat!

Here’s a bit from Raw Silk. I hope it whets your appetite for more! 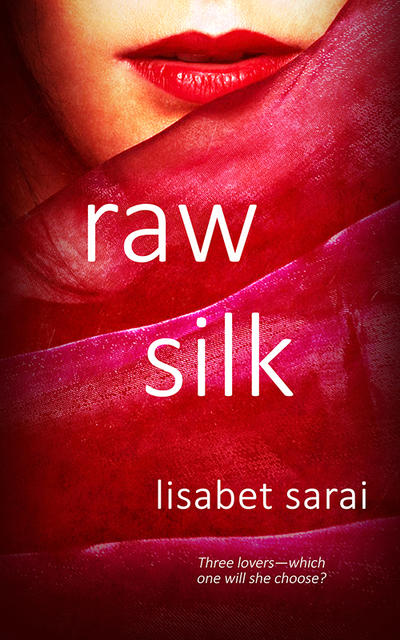 “Thank you, Gregory. I really appreciate your help.”

He arched an eyebrow and grinned. “Well, I am wondering what I should ask of you in return.”

Kate blushed again. By now, she should be used to his manner, but he still managed to simultaneously thrill and embarrass her.

“We could go upstairs to room twelve-sixty-three,” he continued, as if talking to himself. “I rather thought that was what you had in mind, when you suggested that we meet here at the Montien.”

She started to protest then stopped short. Was there any truth at all in his statement? Why, in fact, had she chosen this place for their rendezvous?

“Unfortunately,” he said, his voice sincere but his eyes laughing, “I have an appointment later this evening. So I couldn’t give you the time and attention that you deserve.”

She squirmed in her seat. Disappointment washed over her. An image briefly flashed through her mind, her own naked body bent double over a chair, while Gregory stood behind her wielding a heavy leather strap. The picture was so vivid and unexpected that she sucked in her breath. Her cunt muscles contracted. She searched Gregory’s face. Was he responsible for her wayward mind?

The black-haired giant kept his expression bland and pleasant, offering no clues and no admissions. “I do feel that you owe me something for my help, though—beyond the normal obedience that you owe me as your master.” A flame kindled suddenly in his dark eyes. “Under the table. Now.”

“What—” Kate began to object, but his probing gaze silenced her. She glanced around nervously, to see if anyone was watching. The bar had filled up, but the patrons all seemed to be engrossed with their own companions. Besides, the table Gregory had chosen was in a dim, out-of-the-way corner. Without further hesitation, she slipped under the table and rested there on her knees, awaiting his next instructions.

“Slip off your undergarments,” she heard him say, a little muffled by the table between them. “If you are wearing any, that is,” he added, in a tone she knew was calculated to embarrass her. With some difficulty due to the cramped space, she complied.

“Now, lay yourself across my lap, with your skirt up around your waist.”

No! Not here, in this public place! Yet even as her mind protested, her body obeyed. He leaned back on the upholstered bench, away from the table. She pulled up her skirt then wriggled up into the space he’d made, trying to cause as little disturbance as possible. In a moment, her abdomen and hips rested against the textured silk of his suit. With some satisfaction, she noted the hard lump distorting the finely tailored trousers. Meanwhile, her bare bottom was available and exposed, just below the level of the tabletop.Her head and shoulders rested, fairly comfortably, on the plush upholstery of the bench. She buried her face in the crook of her elbow, as if, by shutting out the visual world, she could insure that no one would see her.

They remained still in this position for what seemed like eons. Kate was intensely aware of her naked flesh. She imagined it gleaming in the ill-lit bar like some secondary moon. Ghostly fingers seemed to be caressing her buttocks, but she knew this was only the suspense acting on her mind. Then came Gregory’s voice, soft and commanding.

“You ran off last night, Kate, before the last act. I had planned a final performance for you, with just me as the audience. Too bad. I understand why you ran, without my permission, but I still need to punish you. You understand that, don’t you?”

She replied with a muffled assent.

“So I am going to spank you, to teach you a lesson about obedience. It won’t hurt as much as the cat-o’-nine-tails. However, you don’t really know who will be watching, do you? There could be a crowd gathered round, admiring the reddening fullness of your lovely ass.”

Kate shook her head, still shutting out the light. Her pussy moistened and her clit tingled. Merely by describing her humiliation, he could make her hot.

She had been expecting further commentary from her beloved torturer. Instead she felt the sting of his palm on her skin. It hurt for a moment, before the warmth spread across her flesh, creeping between her legs. A second slap followed on the other cheek, then a dozen more, until her whole ass burned, tender and alive.

He stopped. She heard the accented English of the waiter.

With his left hand, Gregory spread her thighs and sank three fingers into her drenched vagina. With his right, it seemed, he drained the last of his beer mug and handed it to the waiter.

“And your lady companion?”

Kate wanted to sink into the ground. She had no idea whether she was visible to the Thai across the table from Gregory.

“Will she be returning?”

Gregory worked her cunt with his fingers. Meanwhile, he pressed his thumb against the tight muscles of her anus, seeking access. Her heart beating wildly, she relaxed and let the thick digit enter her.

“She went off to the powder room. Please bring her another gin and tonic.”