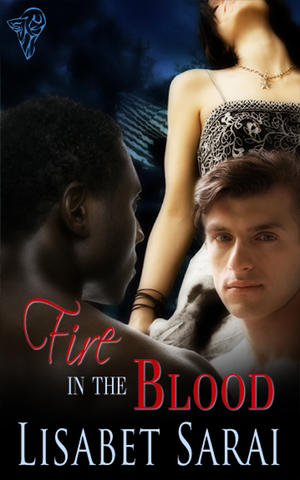 My snog for this Sunday comes from my MMF vampire ménage, Fire in the Blood. It’s a rather dark book, with a vampire hero who’s quite different from the norm.

In the heart of darkness, eternal passion burns.

Maddy and Troy hope that a care-free vacation in tropical Jamaica will re-ignite the passion in their five-year relationship. On a scenic mountain trail, Maddy’s horse bolts and carries her deep into the jungle. Injured and lost, she is saved by a seductive giant of a man whose mere presence kindles unbearable lust. By the time she understands his dark nature, it is far to late for her to escape.

Bitter and alone, Etienne de Rémorcy haunts the forest around the ruined plantation of Fin d’Espoir. He has sworn to never again taste human blood, but when slender, raven-haired Madeleine begs him to take her, he cannot resist.

Troy is hugely relieved when Maddy makes her way back to their hotel after her ordeal in the mountains, but he finds her greatly changed—fiercely passionate in bed, restless and disturbed at other times. The tall, elegant stranger he meets on the beach hold the key to her transformation, and soon has seduced Troy as well. Even Etienne’s most potent magic can’t extinguish the fire in Troy’s and Madeleine’s blood.

When you’re done with my snog, don’t forget to head back to Victoria’sSunday Snog page for more sexy kisses!

She expected ferocity, his power unleashed. She imagined him forcing that awe-inspiring cock deep into her body. Instead, he bent his head and flicked his tongue along the sensitive skin on the inside of her knee.

“Ah…” Pleasure rippled through her, converging on her pussy. He licked again, moving upward, painting her with his cool saliva. She squirmed under his mouth, wanting to feel those thick lips on her aching clit. Gradually, he came closer to her centre, yet still he lingered on her thighs, kissing, nibbling, lapping up the juices that spilled from her hungry, empty sex. She arched up, pushing her pelvis towards him. Without effort, without removing his mouth, he forced her back onto the bed.

He rasped his tongue over the gash she’d received during her wild ride through the forest. Pain sliced into her cocoon of pleasure. The rum had probably disinfected the cut, but her bath had prevented it from clotting. His touch made it throb. When he licked again, the pain intensified.

“Ow! What are you doing?” Etienne ignored her. It felt as though he was probing the wound with his tongue, opening it further. “Wait! Don’t…”

Without warning, there was a hand dabbling in the moist folds at the entrance to her sex. A bolt of pleasure seared her. A finger rocked her clit back and forth, making her shudder and moan. Her lust flooded back, washing away the pain. She felt an odd pulling sensation at the wound site, and her nipples responded, as though he were sucking on those sensitive nubs instead of her thigh. He pushed several fingers deep into her pussy. She clenched around him. Delight rippled out to her extremities as the pull of his mouth intensified. Now she felt the suction in her clit as well as her breasts. Her whole body trembled, balanced on the edge of release.

Etienne plunged what felt like his whole hand into her depths. Something sharp tore into the flesh of her thigh. Her climax hit her, as sudden as a breaking storm, thundering through her, scattering every thought in its wake.

Before she could recover, he was on top of her, his cock nudging against her still-quaking opening, his face inches from hers. His eyes glowed with a fierce, wild light. His lips stretched wide in a grimace of triumph, exposing the pointed teeth of an animal. Blood smeared those lips—her blood. Its rusty scent mingled with his aura of roses. She shuddered, even as her pussy wept tears of new desire.

“Do you still want me, cherie?” he growled. “Now that you know what I am?” He ground his rock-hard erection against the softness at her centre, striking sparks that burned away her fear.

“Yes,” she had time to whisper, before he fastened his gore-stained lips on hers.

She tasted iron, mingled with the crystal freshness of new fallen snow. His tongue snaked into her mouth, savouring her as though she were some exotic delicacy to be consumed. His teeth raked across her lip. The metallic flavour grew stronger. One hand cupped the back of her head, holdingbringing her face to his. The other traced a ghostly path down the side of her neck, from her earlobe to her collarbone. The feathery touch made her nipples throb and her pussy clench.

His fingertips came to rest against just below her jaw. Her heartbeat quickened as she realised he was seeking her pulse.

He broke the kiss, rearing back and locking his eyes on hers. Raw power burned in those eyes, naked and inhuman. Madeleine had no choice but to surrender. She did so gladly.
Posted by Lisabet Sarai at 8:07 AM