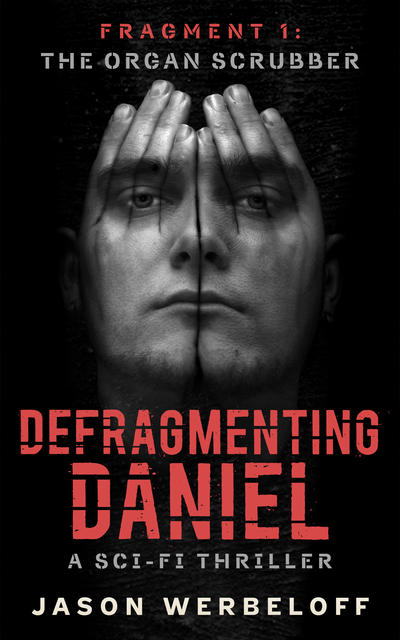 Organ scrubbing was a bloody job, but somebody had to do it. Daniel, an orphan from the Gutter, was put to work scrubbing kidneys at aged twelve. The job had its perks: a warm bed, Law and Order reruns, and an all-you-can-eat Mopane worm buffet.

Until the Orphanage stole Daniel’s parts, and sold them on the organ market.

Now Daniel has grown up, and yearns to become whole again. The cybernetic organ replacements just aren’t the same – he needs his parts back. But the new owners of his organs won’t give them up. Not without a fight.

Just how far will Daniel go to regain his missing pieces? And how much more of himself will he lose along the way?

Defragmenting Daniel is a cyberpunk crime thriller that will unnerve you. Every part of you.

“A work of great imagination. Powerful and gripping.”
“A stark and moving experience.”
– ReadersFavorite.com, 5 Star Review

The sun beat down on the crown of Daniel’s mop of thick, black hair. The hanging smoke in the air thickened. His left eye cried. His lungs protested, spasming as he penetrated deeper into the warzone. About a hundred yards into New Settlers Ways, the sweet stink of burning flesh competed with the smoke. Daniel remembered that smell from the operating theatre, when they’d removed his amygdala. But it was stronger here. Omnidirectional. As though the entire area were a seeping wound, and the sun its surgeon.

Daniel tried to count. To find sevens in the chaos. But the buildings weren’t in rows or columns. There was no order here.

We had you cleaned

We had you eat

He rubbed his eye. Tried to bury the memory of the song.

We love your toes

We love your meat

Odin crawled out of the rucksack and perched on Daniel’s shoulder. They surveyed the destruction together. Daniel could hardly feel the cat’s claws burrowing into his clavicle.

He walked over to one of the mounds of rubble. Heat radiating from the stones baked his cheeks.

“What do you want here?” called out a voice.

Odin darted into the satchel as Daniel whirled around. His cybernetic knee grinded with the sudden turn.

“You have no business here,” said a man. He wore a holey t-shirt and a week-long beard. His eyes were swollen. Frantic.

“We don’t need your help,” hissed the Holey Man.

“I’m not here to help. I’m looking for Porcuperry Road.”

“You PeoPle …” The man spat his P’s “… from up north think you better than us. What with your implanted parts and such.” He nosed the air in the general direction of Daniel’s cybernetic knee.

“Sir, I mean no disrespect, but I don’t like my knee. I’d rather have my original.”

The filthy man’s eyes snapped back to Daniel’s face. “What’s that you say?”

“The Orphanage took my parts to pay my debt. I never wanted the replacements they gave me.” Daniel flexed his leg. The joint wheezed as he lowered it slowly to the earth.

“Hmmm.” The Holey Man stroked his grizzled chin. He had a gash along the bottom of his arm. Were those maggots wiggling along the edges? The man needed a good scrub of Rejek.

“What was it you’re looking for?” asked the Holey Man.

Daniel’s heart quickened. He eyed the broken streets. Doubted he’d be able to make out city blocks in this mess.

The man sighed. “I’ll take you.” He turned on his feet and walked off, not waiting to see if Daniel followed. 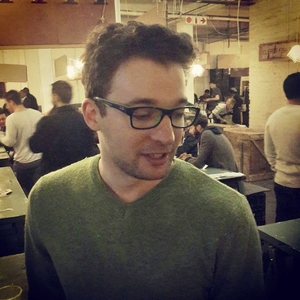 Human. Male. From an obscure planet in the Milky Way Galaxy. Sci-fi novelist with a PhD in philosophy. Likes chocolates, Labradors, and zombies (not necessarily in that order). Werbeloff spends his days constructing thought experiments, while trying to muster enough guilt to go to the gym.

He's written two novels, Hedon and The Solace Pill, and the short story anthology, Obsidian Worlds. His books will make your brain hurt. And you'll come back for more.

Subscribe to his newsletter to receive a free novel, and a lifetime of free and discounted stories: http://smarturl.it/werbeloff

**Newsletter – http://smarturl.it/werbeloff - subscribe to get The Solace Pill free, as well as VIP access to Werbeloff's latest fiction.

**Website - http://www.jasonwerbeloff.com/ - read about the author, and the philosophy behind his fiction.

Purchase link for Defragmenting Daniel: The Organ Scrubber - The book will be free on Amazon for 4 days, August 24 – 27 2016.

The Organ Scrubber is the first fragment of the Defragmenting Daniel trilogy:


Jason is giving away a $15 bookstore gift certificate as part of his tour. And don't forget to download your free copy of the book!

Thank you for hosting my book on your blog! Readers, what is your sci-fi TV series?

In spite of the warning that this "will make my brain hurt" I look forward to reading this book. It sounds fascinating. Thank you for letting me have it in the form my budget can actually afford - free. :D I need to go read now. aka Becky

What a concept! This is the kind of book I love to read. I'm off to download it. Thanks!

The premise here sounds amazing, but after reading (and squirming over) your other excerpts, I'm not sure I can stomach the book! Definitely gruesome. But I love authors who are willing to take risks.

Good luck with the trilogy.

Shocking and yet there's a part of me that fears something in that vein happening and not just to someone else... Riveting story blurb! A revenge with repercussions. It gives a different understanding to "possession is 9/10th of the law."

Most definitely a day time read for me.