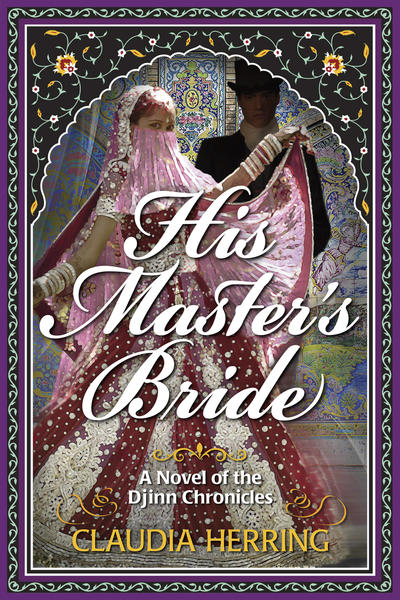 A world of mysterious powers and tumultuous intrigues comes to life in Regency England as a djinni, burdened with a dark secret, is thrown into a love triangle fraught with subterfuge.

A troubled djinni seduces his master’s young wife, forcing her to make a fateful choice.

The djinni Yasir, imprisoned in an urn by a jealous magician, searches the centuries for his lost love. He finds Lavinia reborn in 1811 England, only to discover she’s his new master’s bride.

Desperate to have her, Yasir spell-casts Lavinia’s husband to forget he is master and give her the urn. When she opens the ancient vessel, Yasir emerges, terrifying in his magnificence yet somehow familiar, but she fails to recognize him. She distrusts this djinni even though his very presence enchants her.

Yasir’s spell is fading. Lavinia’s husband has changed. Now he’s violent as he struggles with returning memories of when he possessed the urn. Lavinia strives to keep the two from encountering one another, while torn between fidelity for her husband and her increasing attraction to the djinni.

Impatient to win Lavinia’s confidence, Yasir must convince her of her true identity so they can reclaim their life together. He dare not reveal a deeper reason: Only with Lavinia can he regain his freedom and exact revenge on the magician who confined him to the urn—

If she does not go mad from the spell to awaken her memories.
If her husband does not escape the djinni’s magic and discover her secret.
If the magician does not find them first.

Yasir considered how one’s experience could transform how a person sees. In its way a more powerful magic than any magician’s, even than any djinni’s. He took in the smell of the canvas seats, the creak of the carriage, the damp chill of the air of this port city and confirmed himself back in the present. London, England, the year eighteen hundred and eleven.

Yasir shut his eyes, feeling in the ether for the cold twist of the stranger’s magic. Nothing, thank the Djinn. He looked out the window once more.

There, that would do.

He rapped on the ceiling with his fist, regretting the loss of his cane at Margy’s. The clip clop of the horses slowed, and the coach rolled gently to a standstill. At least the coachman had tried for a smoother ride. Yasir left several half-crowns to jingle on the seat and pushed the curtain aside, peering out. No magical creatures walked the streets. He unlatched the door and stepped into the dark alley between two shabby buildings, ignoring the irksome ache of his turned ankle.

The pull of the urn, increasing each second, slowed his progress. If the stranger were near, he would feel this magic. Yasir prayed it would take little time and leaned on a grime-encrusted brick wall, bracing himself against the urn’s draw. Out of the shadows of the alley strode two men, dressed in ragged clothes, cursing and kicking the ripe garbage, releasing the sour stench of rotting food and excrement.

“Eh, look at tha’ fine gentl’man. ’Ave ye any guineas fer us t’day, me lord?” They raced up to Yasir and took hold of him, finding his pockets and eagerly reaching inside. He let them, smiling to himself, because he knew well it would happen soon. And so, the pull came stronger, its magic pulsing, and he left with it, ever a slave to the urn.

His partner made a great effort to close his mouth. “’E—’e disappeared. Into tha thin air. An I got nothin’.”

“Cor! God’s blud, mate.” The short one crossed himself. “We seen the devil his self and mistook ’im fer a gentleman!”

Claudia Herring aspired to be a baton twirler when she was five and an archaeologist at thirteen. When she became a graphic designer and an author of fantasy, she decided she'd hit upon the perfect compromise.

As a designer and illustrator she formats the written word around visual art. As a writer she weaves words into stories that form worlds. Her novel, "His Master's Bride," a historical fantasy with romantic elements set in Regency England, won first prize in the Houston Writer's Guild Novel Competition. "Ties of Smoke," next in "The Djinn Chronicles" series, is in its second draft.

When she's not delving into the world of the Djinn, Claudia is practicing yoga to go to that hushed space where she imagines and plots her next fantasy novel.

If you like Diana Gabaldon’s Outlander series, or Carol Berg, you'll love His Master's Bride.

Great excerpt! Thank you for sharing.

If you could only eat one meal for the rest of your life, what would it be?

Hello, Claudia! I jumped at the chance to host such an original book. The cover is amazing! I hope your tour goes really well.

Lisabet, Your site with my novel :-) looks amazing. Thanks for the wonderful display.

So glad you're following this tour and reading the excerpts!

Thanks for sharing this giveaway.

Hope you enjoyed the excerpt.

His Master's Bride sounds like a fantastic book and I enjoyed following the tour and reading the excerpts, thanks for sharing and good luck!

Eva, Thanks so much for being a big part of the tour and reading all the excerpts.

I've enjoyed following the blog tour for His Master's Bride and I'm looking forward to reading it! Thanks for sharing :)

I read your excerpt, then cant wait to read whole of your book..... good luck!

Thank you for hanging in there Victoria. Enjoy!

Teni, Thank you I hope you enjoy it.

Thanks for the chance! This is so great.

I enjoyed reading the excerpt. This book sounds like an interesting read. Looking forward to checking out this book.