Hello everyone, and firstly, huge thanks to Lisabet for once again hosting me on her blog. 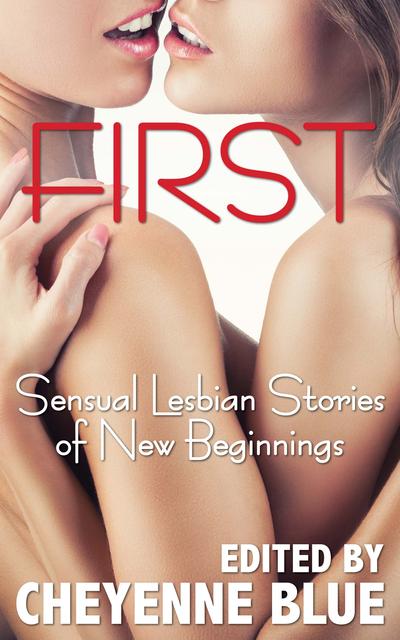 The theme for First may seem obvious—you’re probably thinking this is another anthology of first lesbian sexual experiences. Well, yes… and very definitely no.

When I pitched the idea to Ladylit, I wanted to build a collection that took a wider sweep over the landscape of first times. I hoped for stories that captured the emotions that accompany first experiences, whatever they may be. And that is what I got. The fifteen stories that make up First have captured anticipation, fear, excitement, redemption, anger, wonder, exhilaration,, and of course love and lust and these emotions are woven into a plethora of varied tales.

I hope you enjoy the anthology.

Dive into these fifteen sizzling tales of lesbian love and romance and experience the wonder, the joy, and the magic of new beginnings.

A woman sees her lover for the first time after years of blindness. For the first time in her life, a top trusts her girlfriend enough to let her take control. A connection forged in a bar in New Mexico encourages a breast cancer survivor to take a lover. Stories of new love and first lesbian encounters intermingle with other emotional and physical firsts, and the excitement of new experiences: an around the world flight, the thrill of a carnival, and even the first time to see the sea.

With fantastic stories by favorite writers such as Sacchi Green, Harper Bliss, Annabeth Leong, Allison Wonderland, and Jeremy Edwards, the variety in this anthology means there is something for everyone.

Roses and Thorns by Annabeth Leong

The Opposite of Darkness by Harper Bliss

The Talkies by Jeremy Edwards

Before the Bus Comes by Tamsin Flowers

The First Peonies by Ivy Newman

That Summer by Vanessa de Sade

The Ghost of She by Jillian Boyd

The Sum of Our Parts by Andi Marquette

Or from Amazon at the following links:

Add it to your Goodreads Shelf: https://www.goodreads.com/book/show/26220970-first


My own story "Amelia" is my take on the disappearance of Amelia Earhart, the legendary pilot who disappeared while attempting an around-the-world flight. Here's the start of that story:


When the fuel finally runs out, the engines splutter and fall into silence. Now there’s only the thud of her heart in her ears, the quiet sky and its heavy-bellied white clouds. The increasing panic that had consumed her as she’d tried and failed to contact the ship that was supposed to guide her in to land vanishes. Amelia is calm now, with a clear-headed detachment. She’s an experienced pilot; she knows how the Electra will glide, how it will swoop over the winds of the Pacific, descending, descending, until she bellies down in the ocean.
Next to her, Fred, the navigator whispers “Oh my God, oh sweet Jesus, save our souls” over and over, and one part of her mind thinks how predictable he is, turning religious as the plane and the sky part company and the possibility of death arises.

“Stop that,” she snaps. “Look for land. Howland Island should be here, according to you.”

He stares at her with wide frantic eyes, and she thinks, not for the first time, that the two of them are mismatched as pilot and navigator. She doesn’t even like him much--his inane conversation irks her, as does his habit of releasing gas, blaming the altitude of flight. The thought flashes through her mind that if the Electra crashes into the ocean she might die next to this buffoon, instead of with her husband, or one of her lovers. She shuts that thought out and scans the water. Howland Island is small and flat to the ocean. They could be almost on top of it and not know.

Fred is now reciting the Lord’s Prayer. She flicks him an irritated glance. His eyes are closed. She shouts at him to open his goddamned eyes and look for land, and he might manage to put off meeting his maker for a while longer. He does as he’s told, and they both search the ocean as the plane sinks lower, floating though the layers of wind and air currents, the sea below and Fred's heaven above.

They both see the island at the same moment. It's small, a tiny droplet of land in the expanse of water. It’s dead ahead, and they are too high, it’s too close, and she has no hope of banking or circling back to it. She has to put the plane down sharply and hope there is somewhere forgiving for the plane’s resting place. Amelia adjusts the controls, the little plane shudders, responds, noses down at a steeper angle. Too sharp, she knows, but this is their only option. Her fingers sure on the wheel. She can do it, she knows that. She sees dense green vegetation, and a flock of birds that come bursting out, startled by the silver plane above them that must look like some giant bird of prey.

There is somewhere to land. A lagoon—softest blue, shimmering aquamarine—ringed by jungle, a narrow collar of land around this jewel. She can see the lagoon is shallow—there’s the lazy flap of a ray in the clear water—and she levels out the Electra so that its belly is nearly skimming the water. Fred is tight-knuckled beside her; no doubt he thinks he procured this miraculous island by the power of his prayer.

I can't wait to read this, Cheyenne.

And I congratulate you on getting a guy to submit to the anthology (especially such a nice guy as Jeremy!)

Thanks, Lisabet. I hope you enjoy anthology.

Jeremy's story is excellent--as is all his work--and meshes beautifully with the other wonderful stories in First.